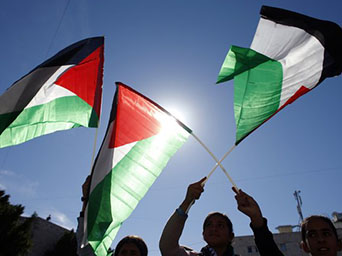 Christian priests who support the regime that trashes Bethlehem

When I criticised one of the 12 MPs who recently voted against Palestinian statehood, I found myself immediately under attack in the press from a local churchman for my “anti-Israel outburst”. His own outburst was a catalogue of misinformation.

“Israel is the only democratic state in the Middle East with full rights of voting and freedoms to all its citizens, be they Jewish or Arab.”

“Only Israel protects Christians and Muslims.”

“In Gaza, when Hamas ‘won’ the ‘elections’, they went on a killing spree, murdering the losing Fatah politicians.”

“Israel heavily subsidises both Gaza and the West Bank.”

“The EU, by contrast, subsidises Hamas who use the money to buy  rockets to fire on Israel.”

For good measure he also spoke of “daily salvos of rockets launched at Israeli towns” and claimed Israel is a front-line defence for the West.

Were these his words? Or God’s words? Or words from the gospel according to Mark Regev and his ‘hasbara’ unit in Tel Aviv? If the Reverend gentleman had been to the Holy Land he couldn’t possibly have come away with such a distorted view — unless he went as a guest of the Israeli Propaganda Machine.

This Christmas, who knows what nonsense some of our God-fearing Christian churchmen will be feeding wide-eyed congregations about the ‘Little Town of Bethlehem’? Those who cherish the biblical image would  weep to see Christ’s birthplace today hemmed in by Israel’s monstrous 8-metre separation wall, bristling with gun towers. They’d weep again to see the routine humiliation of its residents (Christian and Muslim alike) at the checkpoint, where they are penned like cattle and forced to queue for hours on their way to work in Jerusalem, and again coming home (I know, I’ve queued with them).

This particular churchman is sadly mistaken if he thinks Israel is some sort of liberal Western democracy. It is riddled with discriminatory laws against non-Jews.  Civil liberties, due process and basic human rights are denied those who are not of the tribe. And there are more racist laws to come. The Israeli cabinet has approved a bill that defines Israel as the nation-state of the Jewish people.

Sir Gerald Kaufman, himself a Jew, stood up in the House of Commons and asked the Prime Minister (Column 915)
if he would “condemn the new Israeli Government Bill which removes what are defined as national rights from all Israeli citizens who are not Jews, makes Hebrew the only national language and has been denounced by the Israeli Attorney General as causing a deterioration in the democratic character of the state. Will he make clear that statutory repressive removal of citizenship rights on the basis of religion will turn Israel into an apartheid state?”

Agent Cameron, oozing adoration as always for the criminal entity, replied: “What I’d say to the Rt Hon Gentleman is this, that one of the reasons I’m such a strong supporter of Israel is that it is a country that has given rights and democracy to its people, and it’s very important that that continues. When you look across the region, and you look at those indexes of freedom, you see that Israel is one of the few countries that actually ticks the boxes in terms of freedom and it’s very important it continues to do so.”

As sick remarks go, this is pretty high on the Richter scale coming as it does from the latest in a line of British prime ministers who have trampled and destroyed the fledgling democracies of Palestine and Iran. The entire Israeli government would be locked up if they tried to practise their racist policies here or anywhere else in the civilised world.

Furthermore Israel illegally occupies East Jerusalem (which includes the Old City and most historic sites) and  the West Bank and cruelly blockades Gaza. Respected Israeli journalist and former Knesset member Uri Avnery gives an excellent account of the present situation in his article ‘Jerusalem: The Unholy City’. Anglican clergy ought to read it, Cameron too.

And it doesn’t help to demonise Hamas by accusing them of persecuting Christians. Hamas pledged to protect the Christians in Gaza, but Western Christendom has not endeared itself to our Muslim brothers and sisters and it’s no surprise that hotheads occasionally vent their frustration on local Christian communities.  But whichever way you look at it, the main reason why so many Christians have left the Holy Land is decades of relentless oppression by Israel.

When I visited Gaza our small group were warmly welcomed by Hamas prime minister Ismail Haniyeh at a meeting arranged by Gaza’s Catholic priest. Relations were clearly  friendly, and afterwards Haniyeh told Gaza TV: “We are Palestinians first, and Muslim or Christian second. We stand together.” I hear that some Hamas ministers send their kids to the Catholic school.

After Hamas won the elections fair and square in 2006, in order to exercise their democratic right to govern they had to put down an attempted coup by rivals Fatah backed by Israel and meddlers America and Britain. Those creatures from the dark side of our planet, having failed in their plot to subvert the democratic process, then viciously turned the screws in a policy of mass strangulation that continues to this day.

Palestinians are entitled to resist, yet the West demands they renounce violence without ever requiring Israel to do the same and withdraw from the Occupied Territories. When the self-righteous point the finger and talk of “daily salvos of rockets” launched at Israeli towns, they forget to mention the never-ending bombardment of Gaza by Israel’s tanks, fighter-bombers, helicopter gunships and naval gunboats. Nor do they admit that the town of Sderot, which is such a vital asset to Israeli propaganda, was actually built on the ruins of a Palestinian village ethnically cleansed, like hundreds of others, by Zionist terrorists and its inhabitants put to flight and denied the right to return.

The ugly truth is that Israel, quite apart from its mega-crimes against the people of the Holy Land, has a vast nuclear arsenal, won’t sign the non-proliferation treaty and won’t submit to UN inspection and safeguards. It has signed but not ratified the Comprehensive Nuclear-Test-Ban Treaty, similarly the Chemical Weapons Convention. It has not signed the Biological and Toxin Weapons Convention. It stands accused of using banned weapons against Gaza’s civilians. And it routinely defies international law and UN resolutions. No-one wants the rogue state as a neighbour.

So what sort of churchman, in the run-up to Christianity’s most important festival, defends a regime that has turned Bethlehem into a prison, shelled its university and besieged the Church of the Nativity for 40 days killing nine inside? What sort of churchman would support a regime — the same regime — that has outraged the world by indulging in the wholesale slaughter of more than 2000 Palestinians, including the snuffing out of 500+ children and maiming of thousands more, only last summer? Those unspeakable atrocities are still fresh in every decent person’s memory.

And what sort of churchman supports a regime whose territorial ambitions, unless checked, will see few if any Christians left in the land where Christianity began? Well, the sort who belongs to Anglican Friends of Israel, for instance. Their purpose, among others, is to resist calls for a boycott of Israel, support Israel in securing defensible borders and protect the Christian communities threatened by Islamic extremism. They make no mention of Israel’s brutality towards Arab Christians; nor are they concerned with Palestinian defence and security. It is entirely one-sided, favouring Israeli domination in the Holy Land and the continued subjugation of the weak. So there is nothing noble or Godly about these Anglicans.

The Times of Israel last week reported President Abbas as saying: “The Muslim and Christian worlds will never accept Israel’s claims that Jerusalem belongs to them. The Jerusalem that was occupied in 1967 belongs to us.” And so it does, technically. But shouldn’t it really belong to all?

Three religions, two peoples, one land…  it was a challenging scenario at the best of times but is now turned into a nightmare by extremists, religious and political. They must find a way to live together and stop being a pain in the ass to the rest of the world. The only acceptable starting point, it seems to me, is for the UN to implement its 1947 plan to make Jerusalem a ‘corpus separatum’ — an international city under UN control — putting an end to tiresome claims of exclusivity.