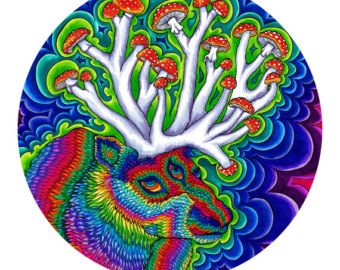 
Ho ho ho! Merry Christmas to all you VT readers out there, whatever your race, religion, ethnicity, political persuasion, gastronomic predilection, and/or holiday merriment preference.

Me, I’m Muslim, so you might think I celebrate Christmas by pulling a black ski mask over my head, grabbing a sword, and staying up all night next to the fireplace on Christmas Eve so I can whack off Santa’s head when he’s crawling out of the chimney. (I’ll bet Rita Kaatz would pay serious shekels for THAT video.) But no – I’m a “good Muslim,” so I’m just hanging out with my family listening to Qur’an. Jingle Bells it ain’t – but it does include a beautiful passage about the immaculate conception and birth of Jesus, peace upon him.

Wallahi, folks, I like Christmas just fine. There’s something psychedelic about all those lights and ornaments. It’s like being inside one of the great cathedrals of Europe and staring transfixed as sunlight shatters the stained glass windows into a million jeweled shards of color and you suddenly realize Aldous Huxley must have risen from the dead and slipped LSD into your communion wafer.

By now I’m sure you’re wondering “but what about the reindeer piss?” Don’t worry, I was coming to that.

My dear e-friend Ron Rattner, a staunch 9/11 truth supporter who moonlights as a spiritually-advanced wise-guy,  reminds me of the origins of the Santa Claus legend in the Scandinavian shamanic tradition’s use of the Amanita Muscaria mushroom. Shamans the world over “fly through the air” during their shamanic journeys through the alam al-akhar (the other world) otherwise known as the alam al-ghayb (the hidden world).

Obligatory Islamic disclaimer: The world’s greatest-ever shamanic journey, the mir’aj of the Prophet Muhammad (peace upon him) from Mecca to the Rock in Jerusalem, and then upward through the seven heavens into the Divine Presence, appears to have been accomplished without the use of mushrooms, cactus, vine, or anything of that nature.

But shamans do sometimes use these substances, which they regard as God-given gifts. Shamans from the northern rim of Eurasia are especially partial to the Amanita Muscaria mushroom. So are reindeer for that matter.

Ron Rattner explains how the whole business of Santa and his flying reindeer REALLY got started:

The shamans lived in yurts, tepee-like shelters made of reindeer skin, with roofs supported by birch poles and smoke-holes at the top. During midwinter festivals of renewal, the shamans gathered the mushrooms from under sacred trees. While harvesting the toadstools, they would wear special attire, consisting of red and white fur-trimmed coats and long black boots, very much like the modern day depiction of Santa Claus. They’d then enter their yurts through the smoke-holes, carrying sacks full of dried fly agaric mushrooms, descending the birch pole to the floor. Once inside, the shamans performed ceremonies and shared the toadstool’s psychotropic gifts with those gathered inside. Then they left as they entered, climbing up the pole and back through the smoke-hole.

But it gets better. Let’s cut to the chase, pull back the curtain, and reveal the secret of Santa drinking reindeer piss:

The Sami have a custom of feeding fly agaric (Amanita Muscaria) to their deer and collecting the urine to drink. The reindeer’s digestive system metabolizes the allegedly poisonous components of the toadstool, leaving urine with the hallucinogenic and psychotropic elements of the fungus intact. Drinking the urine gives a ‘high’ similar to taking LSD. Under the hallucinatory effects of the drink, the Sami thought their reindeer were flying through space, looking down on the world. The reindeer so crave the toadstool hallucinogens that they have been known to eat snow on which intoxicated humans have urinated, creating a reciprocating cycle.

Apparently, when the first Christian missionaries reached Lapland and heard stories of such reindeer flight, they integrated those tales into Western folklore concerning Saint Nicholas. So, the association of reindeer with Christmas was well established for centuries before the 1843 publication of the The Night Before Christmas poem, and the 1949 hit song, ‘Rudolph the Red-Nosed Reindeer’ popularized it with masses of people.

Whether or not Ron’s theory is correct, you must admit that whoever first came up with the image of a flying reindeer with a bright red flashing neon nose must have been drinking or smoking SOMETHING. If anybody has a bootleg Jimi Hendrix performance of Rudolph the Red-Nosed Reindeer, please let me know, as it would support this interpretation.

Unfortunately, as I write this on Christmas Eve, I know whatever you infidels out there are quaffing is probably a lot nastier than reindeer piss. But don’t worry, I won’t crawl down your chimneys and cut off your heads. Instead, I will blow those heads into a billion colorful little pieces.

And to all a good night.