President Obama has just made a name for himself lately. He is now known to have a “Jewish soul.”[1]

Obviously that can have several different meanings. He probably wanted to make the people who put him in the White House (the Dreadful Few) happy. But one of the best ways to test the statement itself is to look at Mr. Obama’s track record.

Mr. Obama just had a “Hanukkah party” in the White House. And long before he ever became president, Haaretz told us that he “launched a blog in Israel written in Hebrew. Its purpose: ‘to help strengthen ties with the Israeli public.’”[2]

“Lest anyone doubt the depth of his sentiments, he also posted online his March 2007 speech to AIPAC. Then in a debate with Hillary Clinton he cited his ‘stalwart’ support for Israel, his deep ties to American Jews and his view of Israel as one of our ‘most important allies in the region.’”[3]

Jeffrey Goldberg, as we noted in the past, wrote explicitly: 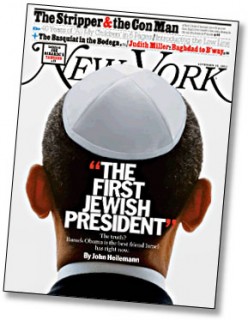 “I handed him [Obama] a copy of the New American Haggadah, the Passover user’s guide edited by Jonathan Safran Foer…

“When I handed him the Haggadah, President Obama, who famously stages his own seders at the White House, (which is a very nice philo-Semitic thing to do, IMHO) spent a moment leafing through it and making approving noises.

“Then he said (as I told the Times): ‘Does this mean we can’t use the Maxwell House Haggadah anymore?

“[Obama] is the most Jewish president we’ve ever had (except for Rutherford B. Hayes).

“No president, not even Bill Clinton, has traveled so widely in Jewish circles, been taught by so many Jewish law professors, and had so many Jewish mentors, colleagues, and friends, and advisers as Barack Obama (though it is true that every so often he appoints a gentile to serve as White House chief of staff).”[4]

Whatever Obama wanted to convey by saying that he has a “Jewish soul,” there is one thing that is quite undeniable. His existential definition here is quite consistent with what Yuri Slezkine of the University of California has written, that “Modernization is about everyone becoming Jewish” and that “The Age of Nationalism” essentially “is about every nation becoming Jewish.”[5]

More recently, Rick Perry has actually revealed what his true political constituency really is. Jeb Bush, of course, has already done so during the Christmas season.[6]

Perry has even gone further. He has recently participated in lightning a Menorah in his office with several rabbis. Then Perry did the next best thing—and I’ll let you figure it out:

Imagine the uproar in the Jewish Universe if a U.S. senator celebrates Christmas in his government office! Where is the ACLU when you need it? Where are the so-called atheist organizations?

As we have meticulously documented around the same time last year, the war on Christmas is essentially Jewish in its origin.

To cite again Jewish scholar Jonathan Sarna, “a preeminent historian of American Jewry,” the Dreadful Few have a “Christmas problem.”

While Sarna is politically right, the issue runs deeper than this. The issue is that for the Dreadful Few, anything that represents Christianity is evil. As Rabbi Abraham Joshua Heschel indirectly articulated,

“I am ready to go to Auschwitz any time, if faced with the alternative of conversion or death.”[7]

David Neff himself commented then, “Jews still find the subject of conversion extremely painful. For them it is, as Heschel said, tantamount to annihilation.”

Christmas, indeed, reminds them of conversion.

But instead of addressing the war on Christmas in a logically historical way, Jewish writer Daniel W. Drezner of the Washington Post tells us that “The war on Jewish Christmas must be stopped.”[8]

Give me a break!

Strive for peace next year. Abstain from evil, uphold the moral law and reason, think on things that are “noble,” “honest,” “pure,” “virtuous” (Philippians 4:8), and help your fellow human beings.

[7] Quoted in David Neff, “Interview with a Pharisee—and a Christian,” Christianity Today, October 12, 2007.