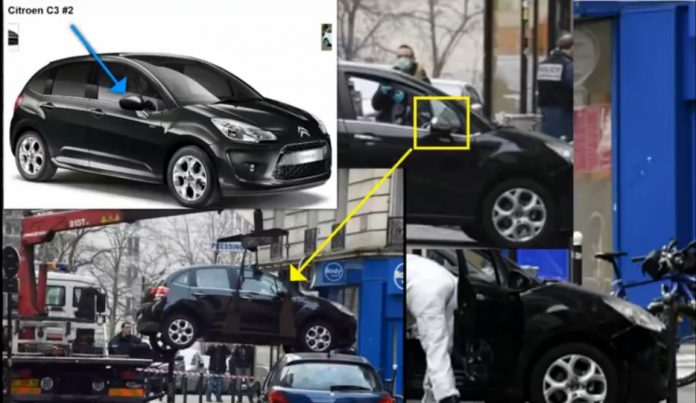 Remember the car supposedly used in the Paris “events,” as calling phony theatre a terror attack is a misnomer?  This is what the friggin’ French did:

They planted the ID beforehand in what was supposed to be an identical car.  Problem is, the second car was a different model, different year.

We exposed the use of blanks during the terror attacks.  Dr. Fetzer showed us how they staged it all, with an “X” spray painted on the road.  Sky News exposed the pig blood poured on the sidewalk of the conveniently unguarded crime scene.

Please excuse the Christian based imperative, but:

“Holy Mary, Mother of God, whose first son Jesus, if he is somewhere is either spinning in his grave or somewhere in heaven laughing himself half to death”

The French staged a terror attack with actors who arrive at the scene of a phony shooting with a 2014 car with chrome mirrors but, immediately thereafter abandon the car which magically turns into a 2013 version with black mirrors.

The new issue of contention/cover-up is the denial that this model car was ever built.  You see, unless you are in France and can navigate a website using “restaurant French,” pretty much what the French themselves speak, you can’t get to the trim configuration page for Citroen C3 and may get suckered into taking trolls seriously.  Ah, but our restaurant French here at VT is “perfection.” (which actually is a French word)

What is it that Jim W. Dean says so often, oh yes:  “You just can’t make things like this up.”

I am all in favor of giving the French and their Israeli friends a second chance.  Let’s say, after a day of running around, losing shoes, smiling for the camera and loading weapons with blanks, they got a text message:

“Hello, this is Citroen Corporation, manufacturer of the car you are currently using in your reign of terror around Paris.  We regret to inform you but your car has been recalled for a seat belt malfunction.  Please return it immediately for repairs.

So, the murderous brothers pull into a dealership, AK47s at the ready.  “How long is it going to take to fix this?”

Citroen says, “About an hour.”  (Citroen is very efficient)

The terrorists, losing their cool, raise their weapons:  “Do you take me for a meshuggenah?  I want a car right now!”

Terror twins:  “OK, here’s what we will do.  I will take this now but I will leave my identification on the seat in case there is some confusion.  After all, the car looks prettymuch the same except it is a different year, different model and has black mirrors.

Citroen:  “But why would you want to leave your identification in a car?  Then again, I could ask why terrorists would return a car on a minor recall in the middle of a terror spree but after all I am French and I have learned to simply ignore things like this out of a combination of good manners and a desire to not have the police shoot me in the head and declare me a “suicide.”