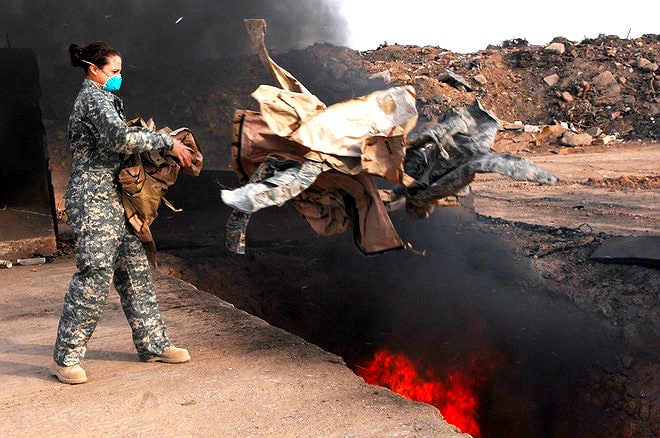 The wars in Afghanistan and Iraq and the use of open burn pits have exposed thousands of veterans to dangerous chemicals.

Dioxin is one of the deadly toxins from incomplete combustion from open burn pits. This is the same carcinogen found in Agent Orange and other herbicides used in Vietnam, killing thousands of veterans.

“Combustion byproducts” is a common term for the chemical mixture that is caused by burning petroleum fuels (e.g., gasoline, heating oil, jet fuel, and diesel).

Some chemicals formed during burning aren’t hazardous, but many are.  Most of the chemicals occur in groups of similar chemicals.  Burn pits create dioxins, which are in the same chemical family as Agent Orange.  Polycyclic aromatic hydrocarbons or “PAHs” are another chemical group that is very hazardous. They are mutagenic and can cause cancer.  The cancer-causing nature of soot, known since the 1800’s, is largely attributed to these chemicals.

Burn pits and burning fuels cause the release of metals previously bound to other materials.  They are broken down into particles small enough to be inhaled and do damage.

In addition to cancer, combustion byproducts can cause many respiratory health problems.

A wide variety of waste oils, fuels, old equipment, and other waste was thrown into burn pits.  Depending on what was being discarded (e.g., old plastic or vinyl materials), the potential to create new and more dangerous contaminants in air was present (e.g., plastic incineration ban create the highly toxic chemical, vinyl chloride).

The VA admits that burn pits were widely used in Iraq and Afghanistan but denies there are any long-term health problems from exposure. For veterans, there’s nothing new in the VA’s response to the need for health care and compensation and injuries from chemical exposures. The long and bitter fight for Agent Orange exposure is testimony to the boilerplate reply from the government, “Nothing wrong with you. You’re just trying to milk the Treasury.”

Veterans can’t sue the government from injuries on active duty. Their only recourse had been to file a VA disability compensation claim.

Veterans have filed lawsuits against defense contractors KBR and Halliburton for injuries from the operation of contractors’ burn pits in Iraq and Afghanistan.

The Supreme Court this past week allowed lawsuits to proceed, despite the objections of the companies and the US government.

The U.S. Supreme Court came out in favor of contractor accountability this week, rejecting attempts by KBR and its former parent company, Halliburton, to dismiss three lawsuits accusing them of harming service members and civilians in Iraq and Afghanistan. (KBR, one of the largest reconstruction and logistics contractors in Iraq and Afghanistan, was part of Halliburton until 2007.)

This would really be a game changer, if the veterans’ lawsuits are successfully:  Defense contractors would have to be aware of their liability for lawsuits from veterans for injuries caused by their negligence.

There’s reports of use of open burn pits after 2011 in Afghanistan and the implicit negligence of senior officers.  A 2011 U.S. Central Command policy requires that incinerators or another trash-disposal method must be operational at bases with more than 100 troops.

In 2012, a U.S. Forces Afghanistan inquiry found the incinerators were operating at reduced capacity, taking in only about 35 percent of the U.S.-generated solid waste, while the rest — including toxic materials like batteries and plastics — was dumped into Afghan-run burn pits.

Purple Hearts are not awarded for toxic exposures; many veterans, sick with cancers and other serious disease, have to fight the VA for health care and compensation.

Those who swore an oath to defend the Constitution against all enemies, foreign and domestic, deserve better treatment.