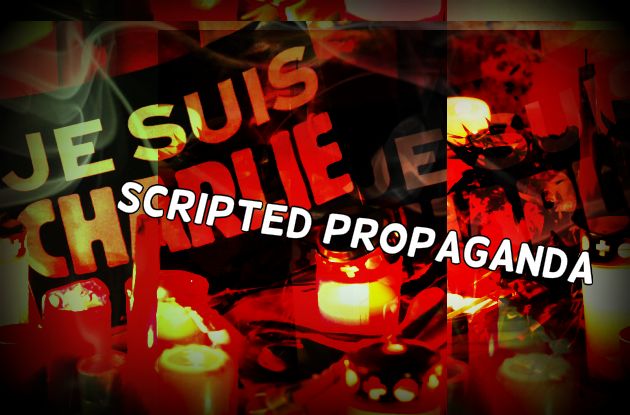 It is one of the most mysterious episodes of the events of January 7: what exactly happened around noon in Rue de Meaux?

Here is what François Molins, public prosecutor of Paris and spokesperson for the French Zionist movement, wrote that same day:

“The suspects – three of them, according to the testimony of a person with whom their car collided – continued their journey north of Paris and violently crashed into Volkswagen Touran in Place de Colonel Fabien in the XIXth district, injuring the driver.

“Then they tried to continue their journey but suddenly abandoned their vehicle and rushed out of their car in the Rue de Meaux, robbing the driver of another car, a Clio. They seized that vehicle and fled in it.”

Many images of the abandoned car and the area cordoned off by the police were broadcast by the national press. 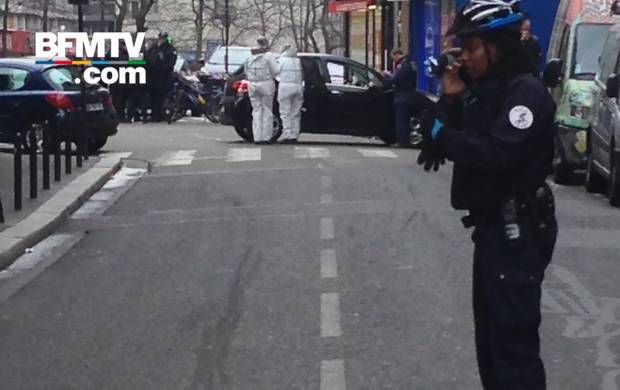 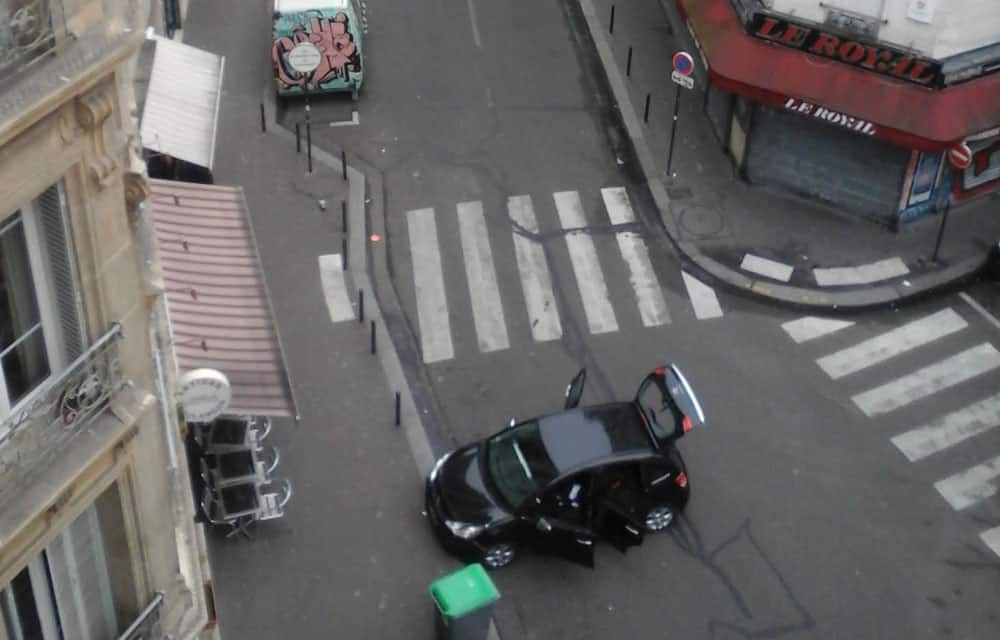 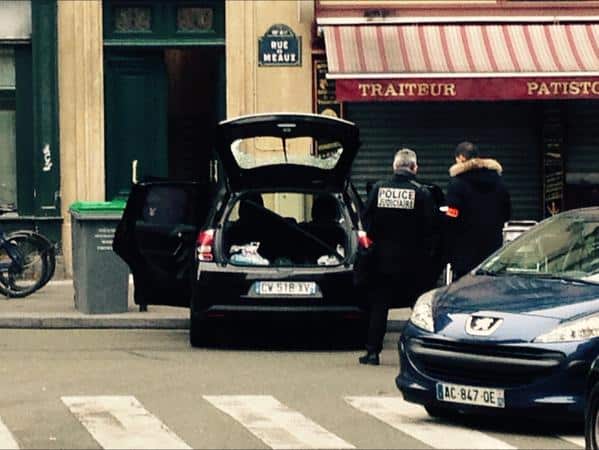 In the photograph above, one can discern, in front of the car, a shop with a terrace and a partially lowered metal curtain. This is a restaurant-bakery called Patistory, located at 45, rue de Meaux.

The special interest of the place? Patistory is one of the seven locations – in all France – of an annual gala dedicated to the Israeli army and organized by the French Zionist association Migdal.

In 2008, members of the France-Palestine Solidarity expressed their displeasure with the stewards of the gala: the Jewish Defense League.

(Translator’s note: The Jewish Defense League, or JDL, is a notorious international terrorist group implicated in hundreds of acts of violence, and untold thousands of death threats, worldwide. Even the FBI, which is normally cowed by the Israel lobby and often complicit in Zionist terrorism, has labeled the JDL a terrorist group.)

First legally registered on January 16 2001, Migdal was founded in 1984 by its president David Bittan.

Note the extremely peculiar status of this organization that, despite its extremism, is recognized by the French government. Migdal blends ultra-Zionism with anti-Arab racism – a natural equation as illustrated by their latest video, posted last summer.

It is not surprising that the proprietors of Patistory – with Migdal – would participate in organizing a gala to support an occupation army guilty of war crimes. In August, the couple that owns the restaurant – Martine Bismuth Bellaïche and Patrick Bellaïche – just happen to have been interviewed by an American journalist.

The theme of his article published by The Christian Science Monitor: the French Jewish community’s attitude toward the latest Israeli bombing of Gaza.

After asserting their participation in the pro-Israel demonstrations, the Bellaïches confessed their “hope” that they would soon be moving “to Israel.”

Seven years earlier, the camera of the French TV network NRJ12, by another odd coinicidence, had filmed the couple in the workplace: the host Arthur had come to offer them tickets for his show.

To sum up: two alleged jihadist-terrorist-anti-Semites (one of the “three” somehow evaporated en route) headed stratight to the area where the largest Jewish community in France lives, and they decide to change “stolen” vehicles in front of a shop run by Zionist extremists collaborating with the Israeli Ministry of Defense.

On top of this incongruous situation, there is the extreme opacity of the political-media narrative concerning the course of events at Rue de Meaux.

Besides the expeditious account of the public prosecutor (cited above), we have six-rather vague and confused witness accounts to help us try to understand what happened.

* The first is the only one that is identified by name. The website 20 Minutes interviewed Cedric Le Bléchec, a realtor who had supposedly “just stepped out of an appointment at 45 rue de Meaux.” Lucky coincidence: the address refers to a six-story building next to Patistory whose front door faces the spot where the terrorists changed cars. What does Cedric tell us?

“A black car stopped in the middle of the street. Two big black guys in military dress got out, one carrying a rocket launcher. They made the man in the car in back of them get out. And they got in, saying “you say to the media that it is al-Qaeda in Yemen.”

“Black guys”?! This witness, whom Panamza tried in vain to locate, is the only one who mentioned this interesting piece of information. A key point: He can not be confusing skin color with clothing color since other witnesses relate that the fugitives were not wearing a hood.

2 * Agence France-Presse aired the testimony of an anonymous local resident who had been leaving the coffee bar Le Dauphin, located about ten meters away. “What struck me is the army boots. The guys forced an old man out of his car and drove off towards Porte de Pantin.”

3 * 4 * A cameraman from The Parisien newspaper’s website filmed the story of two young men whose images were blurred to protect their identities. “Then the car came down Rue Sadi-Lecointe. They got out of the car carrying kalachnikovs and shouted ‘Allah is with us.”

They.. took the other vehicle and apparently drove off towards Porte de Pantin.” Second witness: “They made the driver in the car behind them get out, they said ‘Get out of the car’ and said to tell journalists they said “Al Qaeda in’Allah “.

5 * An unidentified “resident” interviewed by TF1 recounted what his brother – who preferred not to testify openly “for fear of reprisals” – claims to have seen. Extracts: “He saw just two people who robbed an old man behind them… They were no longer wearing ski masks at that point.”

Charlie Hebdo: Terrorists “politely” ask if they could take his car on WAT.tv

* 6 The last witness is the most important: He is the man whose car was supposedly stolen by terrorists. His interview was obtained and disseminated by Europe 1 two days later.

“The driver gets out armed with a machine pistol. They were not wearing masks … They looked like the people you saw (in the published photos, ed.) Except that this time, they were dressed in paramilitary outfits, carrying weapons. As they left, they told me, ‘If ever you address … well, if the media ask you, say: It’s Al-Qaeda in Yemen.'”

The station founded by French-Israeli citizen Jean Frydman failed to report an intriguing detail: The man who “accidentally” found himself stuck behind the terrorists (who then stole his car) saw two of their victims every morning: cartoonists Cabu and Wolinksi, with whom he worked selling newspapers.

And it gets better: He was their “friend” if one believes his interview – also released two days after the attack – with the weekly Paris-Match.

Another curious element: The elderly gentleman suggested that his encounter (with the terrorists) took place “at the corner of Rue Simon Bolivar and Avenue Mathurin Moreau.” Was this the witness’s geographical confusion or the mistake of a hard-of-hearing journalist? The location does not match 45 rue de Meaux where the terrorists’ car was found. 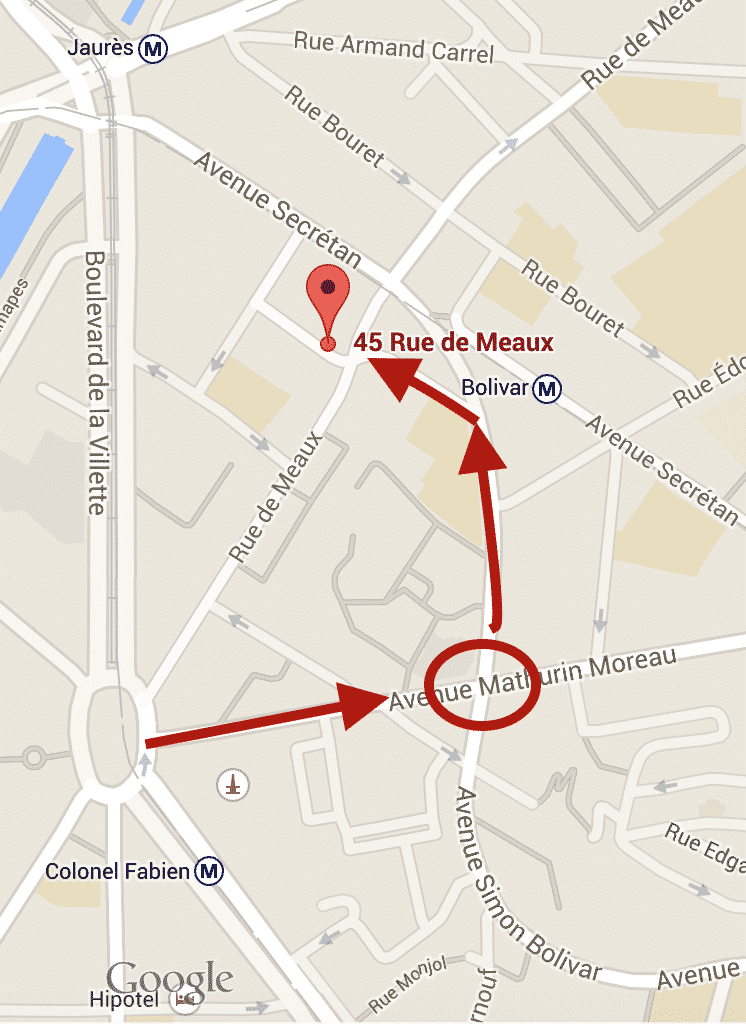 Only consultation of video surveillance captured from a precise camera angle would clear up the confusion.

One thing, however, is certain: take Avenue Mathurin Moreau (coming from Place de Colonel Fabien) then Avenue Simon Bolivar to find yourself in Rue Sadi-Lecointe which leads directly to 45, rue de Meaux – where just to the right is Patistory, and just to the left the – discreet – passage Brie.

A rare advantage of this sector of Paris: the total absence – despite the high population density – of any video surveillance cameras.

In conclusion, let us summarize this singular imbroglio: suspected anti-Semitic terrorist jihadists fled towards the area inhabited by the largest Jewish community in France, abandoned their vehicle in front of a shop run by an ultra-Zionist couple collaborating with the Israeli Ministry of Defense, and stole openly, with their masks off –according to anonymous witnesses – the car of an unidentified newspaper seller linked to two of their victims.

Finally, a secondary but puzzling issue: NO traditional media has reported the testimony of Patistory’s managers and clientele. This media lacuna in itself is staggering: Here we have a restaurant frequented by lunch hour customers with front row seats to historic events (the second escape of the Charlie Hebdo terrorists) whose amazing experience is totally ignored by broadcast journalists.

Unlike what always happens in similar cases, they have not seen fit to go, cameras on shoulders, to collect the eyewitness accounts of the Zionist restaurateurs and their customers.

Icing on the cake: those eyewitnesses themselves are maintaining a suspiciously low profile. On the Facebook page Patistory, there is no mention of the incident that occurred on January 7. The only thing posted was a statement of support for Charlie. 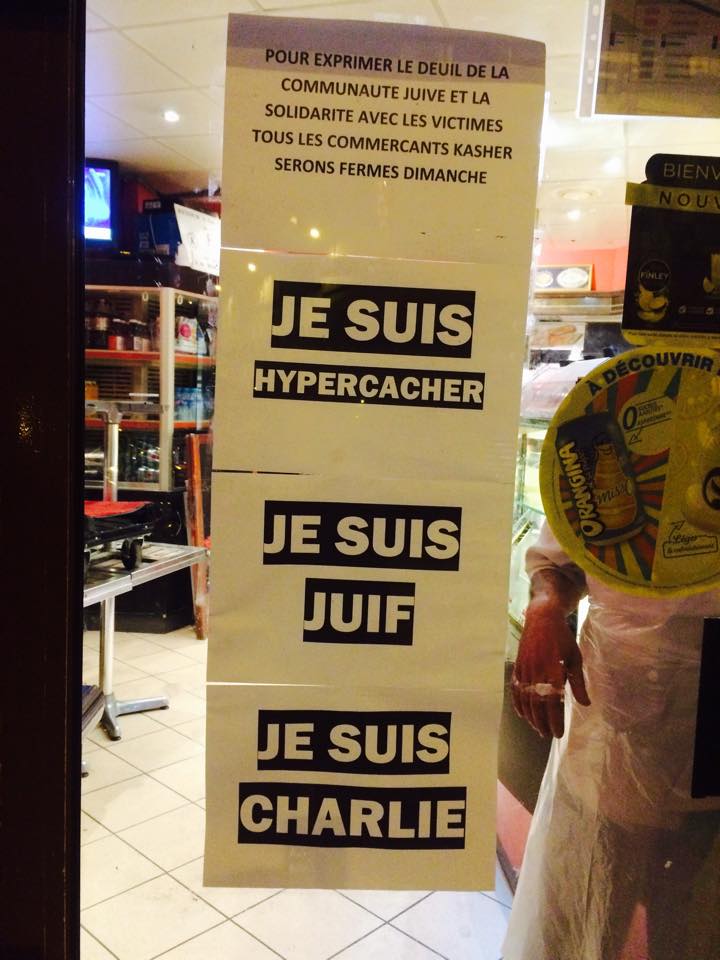 The last word in this sinister Charlie Hebdo affair has not yet been spoken. It is up to you, dear reader and citizen, to break the “French omerta” – the double code of silence – of the Fredou and Patistory affairs. (Helric Fredou was the police investigator “suicided” for refusing to step down from the Charlie Hebdo investigation. -KB)

More than ever, do not let yourself be intimidated by the new orthodoxy of the delirious witch hunts – launched by the censors and their idiot apprentices – against so-called “conspiracy theorists.”

Please pass on this information.