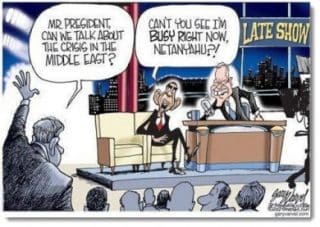 John Boehner, the Zionist pawn who invited Netanyahu to Congress, has implicitly admitted that he made one of the gravest errors ever. Speaking to Fox News, Boehner declared,

“There’s no secret here in Washington about the animosity that this White House has for Prime Minister Netanyahu.  I frankly didn’t want that getting in the way, quashing what I thought was a real opportunity.”[1]

Boehner is sure right on this point. Obama still does not have any plan to cooperate with Netanyahu on the Iran nuclear deal. The Israeli newspaper Haaretz has recently reported that the Obama administration had “to limit the amount of information it shares with Israel regarding the ongoing nuclear talks with Iran, fearing leaks.”[2]

This is unacceptable to Netanyahu. The U.S. is hiding information from him? “Just as Iran knows what kind of agreement is being offered, it’s only natural that Israel should know the details of the deal being formulated,” he said. “But if there are those who think this is a good agreement, why must it be hidden?”[3]

One can imagine Netanyahu waking up in the middle of the night, having nightmare and screaming:

“Mr. Obama, didn’t we (the Dreadful Few) put you in the White House so that we can use you as a puppet? When we say things like, “Jump,” shouldn’t you respond by saying, ‘How high’? Why are you doing this to us?”

Obama added a little fire in the debate when he said,

“We don’t have military solutions to every problem in the twenty-first century. The biggest challenge we have right now is disorder…The old style of authoritarian government is just going to continue to weaken.”

If that is true, then the Obama administration has put Netanyahu in a hot seat because, as we have seen in the previous article, the Israeli regime seems to have no problem with the Samson Option (most particularly when it comes to Iran).

Therefore, Netanyahu has good reason to be desperate. And he plans to counterattack:

“I am going to Washington because it is my obligation to do everything in my power to stop a bad deal. Can I guarantee my speech in Congress will prevent a bad deal with Iran?

“Honestly, I don’t know. The better question is, How could a responsible Israeli Prime Minister refuse to speak to Congress on a matter that could affect our very existence.”[4]

The Zionist regime has already produced a frontal counterattack against Iranians studying in the United States. The Boston Globe reported just yesterday,

“The University of Massachusetts at Amherst has banned Iranian nationals from admission to certain graduate programs that school officials say aligns its policy with U.S. sanctions against Iran.

“Effective Feb. 1, the university will not admit students from Iran to certain programs in engineering and natural sciences.”[5]

Can you imagine the outrage in the media if the same university even remotely suggests for just one hour that Jews will be banned from studying the sciences? Did you hear about Iranians being banned at a major university on Fox News, CNN, the New York Times, the Washington Post, the New York Daily News, etc.?

Did you hear people like Rush Limbaugh, Bill O’Reilly, Sean Hannity, Sarah Palin, Alan Colmes, and other Zionists puppets talking about this? Do you now see how the so-called Jewish diversity has literally crippled academic progress in the West?

A recent poll declared that only 10 percent—10 percent!—of Israelis believe that Iran is a real threat to the United States.[6] And get this: 63% of Americans do not want Netanyahu to come and lecture Congress next month. Moreover, there is a small but vibrant anti-Zionist movement all over the world that is now tired of Israel’s irresponsible behavior. In the UK alone,

“Over 700 British artists representing every field of the arts have taken an Artists’ Pledge for Palestine to boycott Israel culturally or professionally until “it complies with international law and universal principles of human rights.”

In other words, if you exclude the Israeli regime, then virtually no serious person in Israeli with an ounce of brain cells knocking together believes that Iran is a serious threat. And if the Zionist regime in Israel and in the United States does not remind its puppets to tell the world that Iran is a threat or that “anti-Semitism” is in “Europe’s DNA,” then the Zionist regime will cease to have political power over the world. Boehner probably realized this and therefore invited Netanyahu to ignite the fire.

But Boehner probably did not realize that he was just pulling the political lever, and now he simply cannot tell the river where to land. A flood of Jewish Zionists have already blamed him and Netanyahu for that egregious error, which potentially can damage the Zionist cause. Zionist Union leader Isaac Herzog declared,

“This speech which was born in sin, as part of an election campaign endangers the security of the citizens of Israel and the special relations it has with the US.

“With all due respect to his campaign, Bibi must lead as a patriot of Israel and not throw Israel’s security under the bus of the election.”[7]

Two years ago, Boehner told people in the Senate to get “off their ass.” He said unequivocally:

“We should not have to move a third bill before the Senate gets off their ass and begins to do something.”[8]

If he really wanted to cut spending, Boehner should have told his Israeli boss exactly that, since the U.S. gives Israel at least $3 billion every year. Boehner should also have told Netanyahu to stop spending Israeli tax dollars on take-out food. It was reported that Netanyahu spent $24,000 in 2011 on excessive food. Don’t forget that we Americans helped pay for this as well.

Moreover, Boehner should have contacted Yesh Atid party leader Yair Lapid, who said that Netanyahu “has lost all connection to the reality of the concerns of Israel’s citizens – with their daily lives and difficulties.”[9]

“The prime minister who speaks from morning until night about the Iranian threat, is prepared to sacrifice Israel’s position in exchange for an election campaign photo-op.”[10]

“The prime minister is morally corrupt because he puts his interest ahead of the interest of the state. This hedonism is unbearable in a country with such social gaps.

“These endless stories about [high spending at the Prime Minister’s Residence for] ice cream and water in swimming pools, and the country having to pay to maintain three homes, are more than just a bad example. It’s breaking the basic contract between a citizen and his country.”

The real question which must be expanded upon is this: If Netanyahu has lost all connection to the reality of the concerns of Israel’s citizens, who in his right mind will say that Netanyahu will sympathize with the Goyim, most specifically decent Palestinians who are being slaughtered, slandered, and humiliated virtually every single day?

The only people who don’t see a problem with this are the Dreadful Few in America. Things are so bad in that particular camp that people like Jonathan S. Tobin unequivocally equate anti-Zionism with anti-Semitism! Tobin did not hesitate to make this purely dumb and outrageously disgusting statement:

“The line that supposedly exists between anti-Semitism and anti-Zionism is an imaginary one.”[11]

If the Tobin says yes to that question, then he must admit that the “Jewish question” has metaphysically nothing to do with “race” and has everything to do with an ideology—more precisely a Talmudic ideology.