Daniel Estulin is one of the biggest names in alternative media. Author of The True Story of the Bilderberg Group, Daniel has done yeoman’s service alerting the world to the existence of a covert, ruthless, parasitic bankster elite that dominates the world and does not have our interests at heart.

When Daniel Estulin needs to discuss a sensitive topic, where does he turn?

Daniel recently contacted me about a problem at Russia Today (RT), the biggest alternative media operation in the world. He had seen Gordon Duff’s piece on problems at Press TV, and being a huge fan of VT, he wanted to check in with us and compare notes.

Daniel Estulin’s Desde la Sombra (“From the Shadows”) on Russia Today was drawing seven million viewers per week, making it one of the world’s most popular alternative TV shows. But when Daniel did a show on how the Zionist banksters are buying up Patagonia – the best undeveloped land on the planet, and the safest place to be in the event of nuclear World War III or a planetary economic/ecological collapse – RT suddenly canceled his show and pulled the offending episode. Did the Zio-bankster elite lean on RT? Or did the Argentine government, anxious to hush up the secret land sales, tell RT to quash Estulin or lose its license to broadcast in Argentina?

In today’s Truth Jihad Radio interview with Daniel Estulin, we discussed the RT issue, as well as the Bilderberg group and its relationship to the covert global power structure; the plusses and minuses of existing alternative media; the unfortunate fact that Putin and his anti-NWO allies do not have much influence on RT; the recent rash of false flags; and other hot topics.

I was happy to hear that Daniel Estulin considers VT the best in alternative media. VT’s strategy of bringing together talented people who are not for sale and will never be for sale, from a variety of nations, backgrounds, and outlooks, and turning them loose to produce open source intelligence, has worked out well. It certainly doesn’t hurt that certain VT insiders have skills and connections to keep us alive and working.

Now why would an ordained Rabbi be funding ISIS?!

Zakheim, you may recall, was the Pentagon Comptroller on 9/11 who “lost” 2.3 trillion dollars, and whose Flight Termination System (FTS) may have captured and landed the “hijacked” commercial planes, probably at Westover Air Force Base, where selected passengers and stewardesses were forced to make cell phone calls. (The stolen planes then became part of Zakheim’s huge inventory – one of his companies buys old passenger aircraft and refits them as refueling tankers.)

When Scott Bennett quit working for Rabbi Dov Zakheim and joined the VT team, he got into REAL counterterrorism.

Could a real whistleblower garner coverage at the New York Times? And if that happened, would the journalist suddenly drop dead? That’s the question posed by David Carr’s recent NY Times interview with Laura Poitras, Glenn Greenwald, and Edward Snowden. Shortly after the interview, David Carr suddenly “passed away” – one of  Four American journalists dead within 24 hours.

What’s the significance of this interview, and Carr’s subsequent demise? Was there more to this interview than meets the eye? Let’s ask a real counterterrorism expert!

Report on the Carr interview with Snowden, Greenwald and Poitras

I have just finished reviewing the interview between Edward Snowden, Glenn Greenwald, Laura Poitras, and NY times journalist David Carr.  For the sake of brevity, I will bullet point my analysis:

–This interview, in my opinion, is quite a unimpressive, boring, regurgitation of already known technical facts.  It failed, or was intentionally designed to fail, because it did not do what Americans wanted and are expecting–and that is quite simply “INTELLIGENCE ANALYSIS”.

–Rather than “intelligence analysis” of the Snowden and Citizen Four materials, and how they explain the disposition, operations, and predictions of the United States government-intelligence-military institutions and activities, this interview was a dull, sleepy, depressing defeatist type of confused complaining.

–No specific identification or consultation of the biggest story circulating around America–the real America–and that is the “BLACK FLAG, self inflicted 911 attacks upon the Pentagon and World Trade Towers on Sept. 11, 2001.

–Snowden also does not mention the key players that are part of this drama:  Joe Nacchio, President QWEST Communications who was imprisoned by the Justice Dept. and NSA because he refused to hand over custsomer data to NSA-CIA; Brad Birkenfeld, who Snowden observed as a target in a CIA sting operation in Geneva Switzerland; Scott Bennett, Military Terrorist Finance analyst and Booz Allen Hamilton contractor who was imprisoned for Terrorist Financing investigation he was doing, as well as the reporting of Brad Birkenfeld’s Union Bank of Switzerland-Credit Suise and HSBC banks funding terrorist through Saudi and Gulf State donors; Susan Lindauer, and Barbara Honegger, and John Kirakou, and others associated with this intelligence material;  the connections of Benghazi attacks to Birkenfeld, and Snowden’s inside knowledge of CIA-NSA tactics at counter-intelligence, black propaganda operations upon the American public; the international participation of other countries in these NSA spying activities, as well as the victimized countries who were spied upon for economic espionage; Ukraine, ISIS, and Yemen issues.

–Direct exposure of the House and Senate Intelligence, Armed Services, Homeland Security, Judicial, and Permanent Subcommittee on Investigations participation in the cover up of the additional NSA related stories of Birkenfeld-Bennett-Julian Assange, and connections to the Government Accountability Project, the law firm Kohn, Kohn, and Colapinto, and Jesselyn Radack (Snowden’s lawyer).

–No plan, no recommendations, no “PART II”, no call to action for the American people (and international community) to do, to demand, to investigate, and to analyze in order to move forward and protect their freedom, and improve their future.

I realize good leadership is as rare as an eclipse, and few men have the natural temperment, experience, or knowledge to empower followers and people thirsting for truth and direction, but these people must at least be told to try….only with practice, and pushing their limits, and moving beyond their current lives, can they discover their deeper selves and hidden talents.  These people, Snowden, Poitras, Greenwald, and everyone else associated with this ongoing saga–which is coming to a rapid climax–must see themselves as “oracles of truth and knowledge” for the American people to absorb, and be much more aggressive and creative and bold in their efforts to help enlighten our population, and thereby enhance our country. Otherwise they are showing their true agenda is simply to maintain an “unenlightened/dumbed down population, and degrade and weaken and imprison our country like a frog boiled slowly.

This is my brief opinion of this interview.  I hope they take the hints and improve, if they are really genuine and real in their claims.  Otherwise, maybe they are deep cover agents.

And speaking of deep cover agents…get a load of this hideous propaganda stunt by the Zionist infiltrators that infest RT! 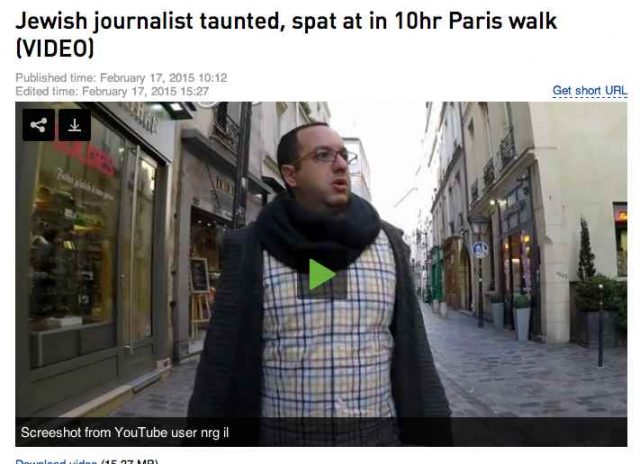 As anti-Semitism continues to rise in Europe, one Jewish journalist decided to replicate an experiment with his own twist: to walk around Paris wearing a kippah. He incurred insults, threats and was even spat at by one passer-by…

The people responsible for this story KNEW the results before they even tried the “experiment” – just like we know what would happen to a guy in Klan robes strutting around Harlem or Watts or the South Side of Chicago.

Daniel Estulin alerted me to this ludicrous staged PR event designed to reinforce the Paris and Copenhagen false flag attacks. The “journalists” at RT responsible for this story appear to be working with the Israeli-linked Operation Gladio terrorist team that pulled off the Charlie Hebdo and Copenhagen shootings, which were designed to spread the “nasty, nasty anti-Semites” meme and convince European Jews to move to Israel.

France needs to identify the people responsible for this RT story, investigate their backgrounds, and (if the investigation turns up what I think it will) arrest them as agents of a foreign power, participants in the 9/11-triggered Zionist genocide against Muslims, and suspects in the Charlie Hebdo and Copenhagen false flag operations.