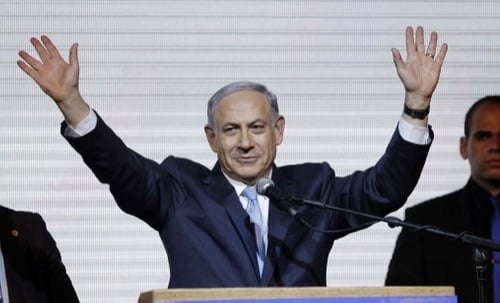 Yesterday’s Israeli election proved that Benjamin Netanyahu engineered a miraculously recovery from an imaginary ‘downfall.’ Netanyahu weathered the intense media campaign against him, both in Israel and internationally, and won despite the miniscule, yet noisy, Jewish international left that promised us that Bibi was about to be wiped out politically. This uniquely dangerous man scored an incredible political victory yesterday.

Israel is a true Jewish democracy. It has many problems but it genuinely represents the spirit and aspirations of the Israelis.

In the Israeli Knesset in 2015, there is not a single Jewish party that cares for the Palestinians and their plight.

There is not a single Jewish member who offers any plan for peace and reconciliation. Meretz, the only so called ‘left’ Jewish party that used to offer a vision of peace, has been reduced to a microscopic role and is primarily committed to LGBT matters.

In the Jewish democracy, the Arab Unity Party is the third biggest party in the Knesset. This is indeed great news. The so-called ‘anti’ Zionists must find this slightly embarrassing. While in the racist Zionists State, Arabs have become the third biggest political force in the parliament, in the ‘progressive’ Jewish pro Palestinian organisations such as JVP, JFJFP or IJAN, Goyim, let alone Arabs, are kept out of decision making circles.

Seemingly, racist Israel is slightly more advanced than its ‘progressive’ Jews only opponents.

We were told in the last few weeks that Netanyahu’s Congressional address was the last nail in his coffin. We read reports that suggested that the Israelis reacted negatively to his warmongering initiative. As usual, we were mislead. The Israelis, as shown by the election results, love Netanyahu and approved his foray into the US Congress. The Israelis love seeing their PM bowed to and cheered on by the American political elite as he persuades them to send their kids to die for Zion.

Those who oppose Israel, its Lobby and Jewish Power must be happy about Bibi’s political victory yesterday. I admit I am certainly delighted.  It saves us a lot of time and delusional spins from Israel’s advocates, Hasbara merchants and the Jewish Left.

Last week we learned that the vast majority of British Jews support Bibi and his Likud party. Apparently, the Jewish State is no different. Israel is Bibi and Bibi is Israel.