Enjoy this week’s False Flag Weekly News – before it gets banned! (Watch it above, or click here to see links to the stories we covered.)

The first country to ban us will probably be France, where Pesident François Hollande recently attacked me by name, while also calling for removing “conspiracy theories” (i.e., truthful reporting) from the internet:

“[Anti-Semitism] maintains conspiracy theories that spread without limits. Conspiracy theories that have, in the past, led to the worst…[The] answer is to realize that conspiracy theories are disseminated through the Internet and social networks. Moreover, we must remember that it is words that have in the past prepared extermination. We need to act at the European level, and even internationally, so that a legal framework can be defined, and so that Internet platforms that manage social networks are held to account and that sanctions be imposed for failure to enforce.” (source)

Hollande’s suggestion that “conspiracy theories” will be banned “at the European level, and even internationally” means that if he’s right, you may not be able to watch False Flag Weekly News much longer.

Actually, for all I know, we may already be banned in France.  According to RINF.com:

“Earlier this week, the Interior Minister of France — with no court review or adversarial process — ordered five websites to not only be blocked in France, but that anyone who visits any of the sites get redirected to a scary looking government website, saying:

You are being redirected to this official website since your computer was about to connect with a page that provokes terrorist acts or condones terrorism publicly.”

Along with his statement calling for outlawing “conspiracy theories” Hollande issued a diatribe attacking me personally, alongside four other “leading conspiracist intellectuals.”

Why are the French authorities so angry with me?

They are freaking out about the new book I am about to publish, We Are NOT Charlie Hebdo: Free Thinkers Question the French 9/11.

The book has intellectual respectability and thus crossover potential and the ability to reach and influence people who matter. And it includes more than enough information for any reasonable reader to conclude that the Charlie Hebdo affair, like most of the other spectacular “Islamic terror attacks,” was a false flag operation.

In former times, books banned in the USA, like Ulysses and Naked Lunch, were printed in France and smuggled across the Atlantic. Will We Are NOT Charlie Hebdo have to be printed in North America and smuggled into France? Or will Hollande get his way and convince the US to revoke whatever is left of the First Amendment and ban it here too? 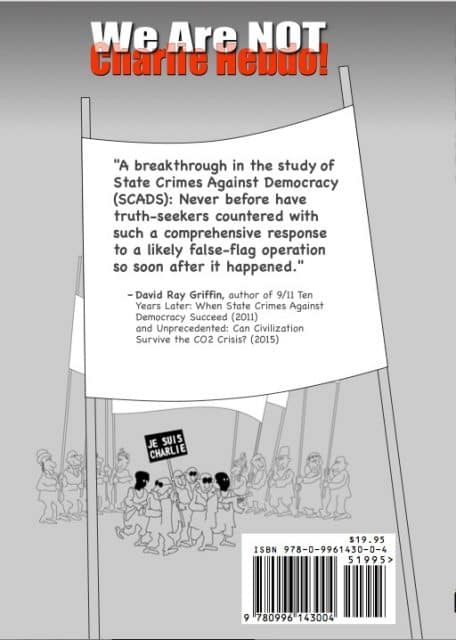 Another trial balloon came from UK PM David Cameron, who said that people like me are “nonviolent extremists” comparable to ISIS who need to be eradicated using all means at the government’s disposal.

Thanks, David, I love you too!

Ironically, it seems the Charlie Hebdo PR campaign, which was supposedly about defending free speech, has triggered the biggest crackdown on free speech in French history…a crackdown that is threatening to go global.

So if you actually do support free speech, please go to http://wearenotcharliehebdo.blogspot.com and purchase an advance copy of We Are NOT Charlie Hebdo: Free Thinkers Question the French 9/11. As David Ray Griffin says, it’s a “breakthrough” book. Buy it while you can – and deliver a symbolic middle finger to François Hollande and the other state terrorists who “hate our freedoms.”