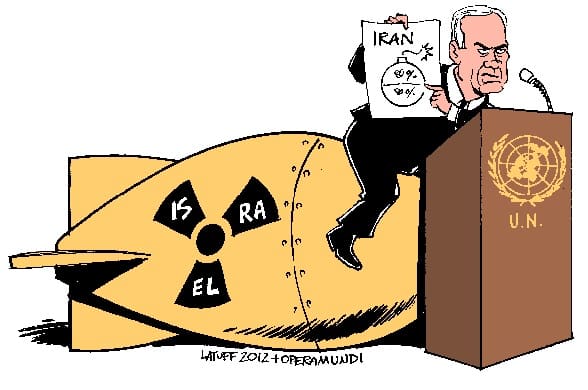 As Obama leaks documents outing Israel’s nukes, Barack-vs.-Bibi fireworks are going off in advance of a likely deal with Iran this week, MondoWeiss reports.

Is this the week that the US-Israeli relationship began to implode?

On Monday, White House Chief of Staff Denis McDonough threw down the gauntlet: “An occupation that has lasted for almost 50 years must end.” The statement was a pointed rebuke to Israeli Prime Minister Netanyahu, who won re-election last week running on a no-Palestinian-state platform. McDonough added that Netanyahu’s obstructionism was “so very troubling.”

Also on Monday, the Wall Street Journal revealed that Israeli spies eavesdropped on US-Iran negotiations. The Israelis shared classified information with Zionist assets in the US Congress in an effort to destroy progress toward a US-Iran agreement. The representatives who collaborated with Israeli spies appear to be guilty of conspiracy to commit espionage. They are certainly guilty of bribe-taking (since they are all on the Israeli payroll by way of “campaign contributions” as well as illegal, unreported favors.) And in working to undermine their own government at the behest of a foreign power’s intelligence service, they are arguably guilty of treason as well.

On Tuesday, an Israeli official said “it’s no secret” that President Obama tried to unseat Netanyahu by influencing the Israeli election. (It’s also no secret that Netanyahu tried to get rid of Obama in 2012 by having Likud assets, including billionaire Las Vegas godfather Sheldon Adelson, funnel more than one hundred million dollars into the coffers of Obama’s opponent, Mitt Romney.)

Also Tuesday, Obama himself blamed Netanyahu for the “very dim” prospects for Israeli-Palestinian peace. Though the US president also added that “our military and intelligence cooperation with Israel will continue,” the fact that he felt it necessary to say so, spoke volumes—raising the possibility that the relationship some day might NOT continue.

But could any US president really decide to end American subservience to Israel? Given the power of the Zionist lobby (which owns the US media, Congress, and much of the financial and organized crime sectors) many observers say a break with Israel would be politically impossible.

But if, as Mao said, political power grows out of the barrel of a gun, the Zionists may be in trouble. There is one powerful institution in America that the Zionists do not fully dominate: the US military. And many of the men and women who have been fighting and dying in the post-9/11 wars-for-Israel are furious at the deceptions that launched those wars.

In the immediate aftermath of the Zionist coup d’état of September 11th, 2001, the US military and intelligence high commands were purged of “aware” individuals loyal to the Constitution of the United States. But since then – and especially since the election of President Obama – loyalists have been creeping back into high positions, while Zionist traitors are on the defensive.

The recent firing of Captain Heather E. Cole, former commander of Strategic Communication Wing 1 at Oklahoma’s Tinker Air Force Base, is just the latest incident in an apparent ongoing purge of unreliable links in the nuclear command chain. Beginning with the “loose nukes” incident at Minot Air Force Base in 2007, which led to a rash of firings and mysterious deaths, members of a Zionist-linked parallel command chain implicated in the 9/11 attacks have been removed from sensitive nuclear-weapons-related positions.

VT sources report that the firing of Captain Cole may have been part of an attempt to deprive Netanyahu of his “Samson Option”–his ability to threaten the world with nuclear apocalypse. According to VT sources, Netanyahu was expected to lose the Israeli elections. (Based on exit polls, he may actually have lost the vote but won thanks to rigged voting machines.) Knocking out one more link from the Zionist parallel command chain infesting the US military weakened Netanyahu’s Samson Option position, and sent a message that no nuclear nonsense would be tolerated from the Likudniks and their US assets in the event Netanyahu was overthrown.

The behind-the-scenes war between loyalist elements of the US military and intelligence communities and Zionist infiltrators is the elephant in the living room that no mainstream media outlet will cover. This covert power struggle, in which President Obama is said to lean lightly toward the side of the loyalists, could be Israel’s undoing.

The bottom line is that the US and Israel have very different geopolitical interests. The US would profit from rebuilding its industrial base through modest protectionism, while using its military edge to promote peace and stability as the world gradually turns multipolar. Israeli expansionists (and the international banksters behind them) profit from global and regional destabilization, wars (especially against Israel’s Islamic enemies), and the establishment of a neoliberal New World Order built on the smoking ruins of traditional societies.

Netanyahu’s minions have worked hard to convince American leaders that Israel and America have the same interests. The infamous Wolfowitz Doctrine, drafted in the wake of Persian Gulf War 1, held that the US should destabilize and hobble other countries to ensure they can never rival the US in wealth and power. But Wolfowitz is a Zionist agent, and his doctrine was designed to promote a hard-line American imperial agenda that would be “good for Israel” but bad for America. America’s war on the world, which accelerated when the Wolfowitz doctrine became official US policy after 9/11, is above all a war on Israel’s enemies. To a lesser extent, it is a war to maintain the American imperial autocracy that makes Greater Israel possible.

But the Zionists are not really interested in any “New American Century.” Netanyahu’s real feelings about America were revealed in a secretly tape-recorded conversation in Fink’s Bar in Jerusalem al-Quds in 1990:

“If we get caught they will just replace us with persons of the same cloth. So it doesn’t matter what you do, America is a Golden Calf and we will suck it dry, chop it up, and sell it off piece by piece until there is nothing left but the world’s biggest welfare state that we will create and control. Why? Because it’s God’s will and America is big enough to take the hit so we can do it again, again and again. This is what we do to countries that we hate. We destroy them very slowly and make them suffer for refusing to be our slaves.”

Netanyahu’s arrogance will prove to be his – and the Zionists’ – undoing.