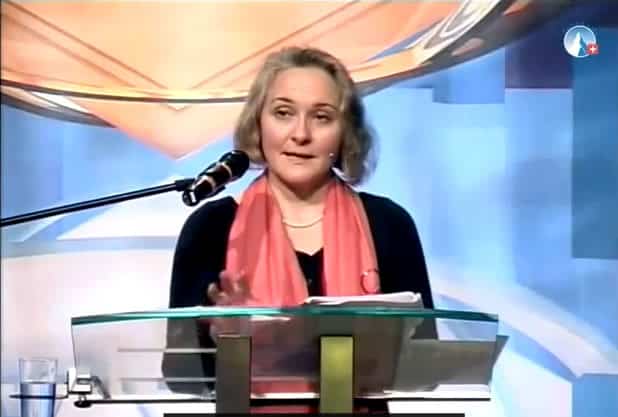 In this video, Sylvia Stolz, who has been called the German Joan of Arc, discusses her experiences as a trial lawyer defending Ernst Zündel and others who have been charged with holocaust denial. A question that people have been asking for a long time is that if the holocaust is based upon such solid evidence, and can withstand historical scrutiny, then why is it against the law to question it, as indeed is the case in France, Germany, and certain other countries?

But the picture of just how repressive things can get in countries where laws like this are on the books is darker and more Kafkaesque than most of us realize. Stolz describes the arbitrary and coercive parameters set by the German legal system when defense attorneys  attempt to submit evidence or mount a rational, reasoned defense of their clients. In cases where defendants are charged with holocaust denial, normal judicial procedures and rules of evidence are in essence tossed out the window, making a legal defense practically impossible. What comes through loud and clear from Stolz’s talk is the complete, utter insanity of holocaust denial laws. Here is a bit from the video description:

In the speech, Stolz discusses her experiences as a defence lawyer for so-called Holocaust deniers in Germany, and describes the Orwellian system of state-enforced repression there which denies defendants (and their lawyers!) the right to explain themselves under threat of additional charges for the “repeat offence” of expressing a forbidden idea, even in their own defence in a court of law. Stolz further relates how the subject of the Holocaust itself has never been clearly or adequately defined by the German courts through the normal channel of judicial findings-of-fact in precedent decisions. Instead, the courts have relied on the arbitrary doctrine that the facts of the Holocaust are “self-evident” and thus in no need of proof, despite the obvious objection that the arguments of the “deniers” themselves clearly demonstrate that those facts are indeed contestable and thus cannot be “self-evident” by definition.

In the face of such abuses and absurdities, other lawyers might throw up their hands and simply walk away: Sylvia Stolz has the courage to call injustice what it is, and take a stand. Her speech is an extraordinary document of our times, a deeply moving call “to think what is true, to feel what is beautiful, and to want what is good.” Wherever you may fall along the ideological spectrum, if you believe in freedom of expression, this speech is a must.

Stolz has been arrested, jailed and stripped of her license to practice law. And on February 25, 2015 she was sentenced to 20 months in prison for “racial incitation”… on the basis of statements she made in this speech. The talk was given on November 24, 2012.