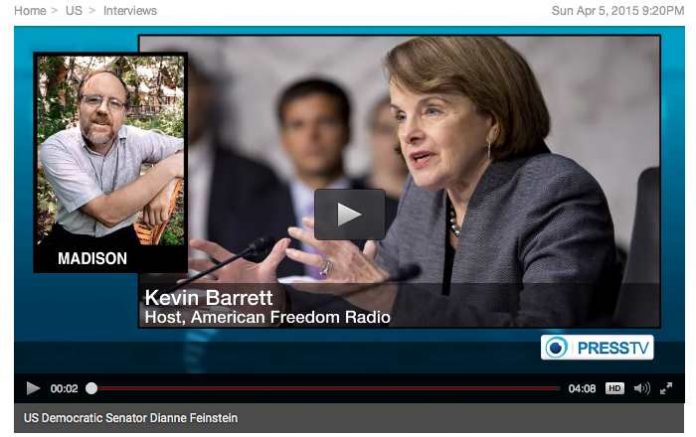 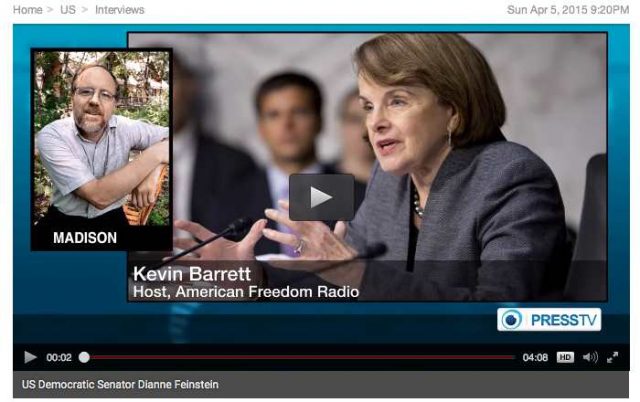 
Israel’s friends in the United States, such as Democratic Senator Dianne Feinstein, are trying to prevent dangerous Benjamin Netanyahu from mounting a 9/11 style false flag operation against Iran, an American scholar and journalist in Wisconsin says.

Dr. Kevin Barrett, Veterans Today editor and founding member of the Muslim-Jewish-Christian Alliance, made the remarks in a phone interview with Press TV while commenting on Feinstein’s warning to the Israeli prime minister on Iran.

Feinstein told CNN on Sunday that Netanyahu’s unending plots to torpedo an emerging nuclear agreement between Iran and the P5+1 could “backfire on him”.

“Senator Dianne Feinstein is Jewish and a strong supporter of Israel, but she has apparently joined forces with the realists in the United States who recognize that the nuclear deal with Iran is the best means to trying to exit from this horrible quagmire that the neoconservatives led America into in the Middle East,” Barrett said.

“Senator Feinstein is a liberal Democrat and part of the president’s party, but she is also a pillar of the Zionist-Jewish establishment. She is very wealthy, and married to a wealthy man, Richard C. Blum. There are very important players among the American Zionists,” he added.

On Thursday, the P5+1 group – the US, Britain, France, China, Russia and Germany – reached an outline of a potentially historic agreement with Iran over Tehran’s civilian nuclear work that would lift all international sanctions imposed against the Islamic Republic in exchange for certain steps Tehran will take with regard to its nuclear program.

(From L) US Secretary of State John Kerry, Iranian Foreign Minister Mohammad Javad Zarif and EU’s foreign policy chief Federica Mogherini arrive to announce an mutual understanding on Iran nuclear talks on April 2, 2015 at the Swiss Federal Institutes of Technology (EPFL) in Lausanne, Switzerland. (AFP photo)
US President Barack Obama hailed the “historic understanding” with Iran, saying that it paves the way for a final agreement in three months.

But, several Republicans in the US Congress have denounced the nuclear understanding, saying lifting sanctions on Iran would provoke Israel into an armed conflict with the Islamic Republic. Israeli officials have called it a “historic mistake which will make the world far more dangerous.”

“It’s significant that someone like Senator Feinstein is… warning Benjamin Netanyahu to stop trying to sabotage the nuclear agreement with Iran,” Barrett said.

“I think this represents the growing consensus among the grown-ups in the room, that is the more mature elements in the American leadership, that it’s time to stop this process of inventing lies and myths to demonize enemies in the Middle East – ostensible enemies or manufactured enemies – in order to achieve political objectives at home, in order to justify imperial expansion and theft of resources, and especially in order to supposedly help Israel to continue with its expansionist and genocidal policies,” he stated.

“I think that process that began on September 11, 2001 when neoconservatives seized power in the United States in a coup d’etat and then manufactured all sorts of lies to drag the US into wars against Israel’s Islamic opponents. This process has run its course. It bogged down the US in a terrible quagmire in Iraq and Afghanistan,” he noted.

US officials assert that the September, 11, 2001 terrorist attacks, which killed nearly 3000 people in the US, were carried out by al-Qaeda terrorists but independent analysts say it was a false-flag operation and that al-Qaeda leader Osama bin Laden was just a bogeyman for the US military-industrial complex.

They believe rogue elements within the US government orchestrated or at least encouraged the 9/11 attacks in order to accelerate the US war machine and advance the Zionist agenda.

People covered in dust walk over debris near the World Trade Center in New York City, on September 11, 2001.
“And the US Empire is tottering as it faces fiscal ruin because of the trillions of dollars that have been wasted on these wars which have done nothing but destabilized the region and the world, ruined America’s good name and created even more hatred against the US that could always boomerang in the future,” Dr. Barrett pointed out.

“So the more realistic elements in the American foreign policy circles recognize that we need to stop lying and using these lies to embark on foolhardy wars. And that’s what Netanyahu wants to do with this lie about the Iranian nuclear program, which is not a weapons program.

“The Israeli intelligence service and the US CIA both have said that there is no evidence that Iran is developing weapons. We have [Gareth] Porter’s book, Manufactured Crisis [that] proves that Israelis forged documents trying to make the impression that Iran was interested in nuclear weapons. But that has been exposed as a lie.

“So the mature people, the Democrats, the realists, and Senator Feinstein among them, have decided that they are going to back out of this neoconservative strategy of destabilization, big lies and perpetual war. And I think that’s a good sign.

“I think that she is warning Netanyahu in part because Netanyahu is very dangerous, always capable of mounting a false flag attack, 9/11 style, which he would try to blame on Iran, and would try to use some sort of an excuse try to go to war with Iran, or at least sabotage the deal.

“I think Feinstein and her friends are saying that, ‘they won’t stand for this, don’t even think of trying; it would backfire on you if you tried it’.

“So I think this is all good. And I hope that events continue to move in a more productive direction and the United States can pull itself out of this hole it dug for itself with these 9/11 wars, and normalize its relations with Iran which is a potential force for stability and prosperity in the Middle East.”

Why Veterans Should Consider an MBA Before Starting a Business