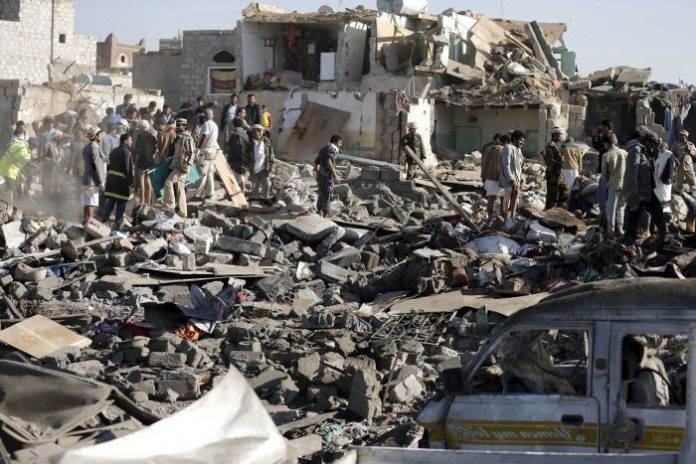 “We can’t rule out the possibility of the involvement of Mossad in steering the conflict in the Middle East from Arabs vs. Israel to Sunni Arabs Vs. Shia Arabs”

There seems to be a repeated pattern here. It is clearer than ever. What took place in Iraq, Syria and Libya is currently engulfing Yemen. Yet another Arab country is crumbling under the winds of the Arab Spring — soon turned to Islamist winter.

The Middle East couldn’t get more complicated. In the aftermath of the Arab uprisings, a deadly mixture of religious extremism, proxy wars, sectarian tension and tribal rivalries is destabilizing the whole region.

Yemen might be one of the Arab world’s poorest countries, but it has always been a strategic geographic area in the Middle East. The Yemenite Bab-el-Mandeb, a narrow strait separating between Yemen and the Eastern Horn of Africa, acts as a strategic link between the Indian Ocean and the Mediterranean Sea, via the Red Sea and the Suez Canal.

Any turmoil in Yemen could affect the world maritime economics and shipping, especially oil carriers. Furthermore, this turmoil could start a war between Saudi Arabia and Iran, as the one currently underway.

Historically speaking, Yemen is a genuine part of ancient Arabia. The genealogy of many of the tribes of the Eastern Province of Saudi Arabia could be traced back to Northern Yemen. The whole Eastern Province, in addition to the largest province of Saudi Arabia, is dominated by a population of two million Shiites and is considered a focal point of opposition against the Saudi monarchy.

Hence, we could understand why Saudi Arabia has acted so quickly and decisively against the Houthi Shiite sect and forces in Yemen. A Shiite uprising could well be the Saudi ticket to the Arab Spring mayhem. Sunni and Shia are the main two denominations in Islam. 90% of world Muslims are Sunni and 10% are Shiite. Iran is the world’s biggest Shia power, while Saudi Arabia is the world’s most influential Sunni country

The historic background of the Sunni–Shia discord lies in the schism that occurred after the Islamic prophet Muhammad died in the year 632, leading to a dispute over succession to Muhammad as a caliph of the Islamic community. Over the years, Sunni–Shia relations have been marked by both cooperation and conflict, but never outright war like we’re witnessing today. Actually violence between the two sects has been escalating since the American invasion of Iraq 2003.

The repeated pattern of using the sectarian tension in the Middle East (mainly Shia vs Sunni) as a game changer and as a fuel to an ensuing sectarian war strongly suggests the involvement of a third party. Interestingly, the civil wars in Syria and Iraq have been ignited by a series of massive bombings carried out by anonymous parties – most likely covert operatives.

The timing of the bombings has led to an escalation of the violence that ruled out any remaining possibility for talks or reconciliation. Israel as a Middle Eastern country, a Zionist aggressor by Arab definition, has a genuine stake in destabilizing the region.

Therefore, we can’t rule out the possibility of the involvement of Mossad in steering the conflict in the Middle East from Arab vs. Israel to Sunni Arabs vs. Shia Arabs. This would be a huge success for Israel covert operatives and political strategists.

To achieve that long-anticipated Israeli goal, Tel Aviv had to introduce a new major player in the region with new tactics. Instead of the traditional military confrontation, ISIL were used to wage a new asymmetrical warfare in the Middle East, targeting Israel’s adversaries. In a few years, the so-called Islamic State/ ISIL — trained and equipped by the US, and infiltrated by Mossad — has helped Israel accomplish goals it has been dreaming of for decades.

With the start of Arab Spring uprisings, Iraq followed by Syria have been turning into theaters for covert operations and proxy wars, all carried out under the guise of Shia/Sunni conflict. These battlefields have also been a place for ISIL to thrive.

In Yemen, the Shia Houthis have recently been encouraged by Iran to take advantage of the power vacuum that ensued after the menacing Arab Spring uprisings.

That happened as Iran was concluding a deal with the US/EU over its nuclear program. Some analysts say Iran used the conflict in Yemen as a bargaining card in the negotiations with US. Others believe the Shia Houthis/Sunni Tribes civil war has been initiated to divert focus off the Syrian-Iraqi fronts, where Iran is also gaining significant control.

It is noteworthy that starting a war in Yemen is a alarming signal for the Saudis. Iran is not merely backing the Houthis for the sake of more regional hegemony, but also to destabilize the Eastern borders of Saudi Arabia. The Iranians simply to put the Saudis under pressure, and flex some muscles in front the US.

The Saudis started this and infuriated the Iranians when the Kingdom backed up the rebels and financed the war against Syria’s Assad — Iran’s longtime ally.

All the turmoil in Yemen could have been contained and resolved had it not been for the bombings on March 20th. After that synchronized suicide bombing of two mosques in the Yemeni capital of Sanaa, killing more than 140 Houthis, Yemen was never the same again.

The Houthis blamed Al Qaeda of Yemen for the bombings, but Al Qaeda denied responsibility.

In a late and hesitant statement, and as if it were an afterthought, ISIL claimed responsibility. ISIL has not provided any evidence to support its claim, such as images, or “martyr will” videos by the alleged bombers. It only showed edited photos of several individuals, whom it claimed carried out the attack. Nonetheless, the Houthis didn’t buy the ISIL bluff card and shifted their retaliatory operations to the South towards Al Qaeda.

The targeted mosques had been gathering places for members of Yemen’s Houthi rebels. After those two bombings, all hell broke loose in Yemen. The Houthis, in cooperation with forces loyal to former president, Ali Abdullah Saleh, escalated their military operations inside Yemen and planned to capture Aden after they had already seized control of the capital Sanaa. Then, the country swiftly turned into chaos as the Saudi-led military coalition started bombing the Houthi strongholds.

The bombing of the Houthis’ mosques is the straw that broke the camel’s back for Yemen. From the start of the first so-called Arab Spring, there have been similar attacks and bombings. They all have been carried out by anonymous parties. The bombings are similar in their calculated risk of turning any peaceful protests into outright civil war and chaos.

It is obvious that the Sanaa bombings, as in the case of the early bombings in Syria and Iraq, are carried out by covert professional operatives – professional enough to have anticipated the escalating regional response.

Within Yemen, there are many conspiracy theories about the attack, including that it was carried out by a party, other than the Islamic State, with a vested interest in providing a pretext for a Saudi invasion. Also one of the dramatic and tangible results of the Yemeni war is the formation of a new Arab NATO alliance.

If we bear in mind that the new Arab joint forces, for the first time, view Iran – not Israel – as the Arabs’ enemy, we could guess who is behind the operation, and who has benefited most from the Sanaa bombings.