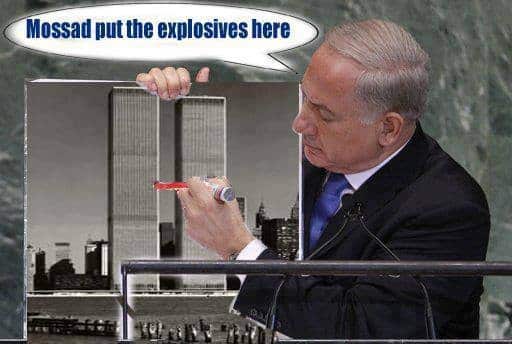 After the 9/11 attack, Benjamin Netanyahu was elated. Based on what he said publicly, he probably went to a party on the same day to celebrate the ideological paradigm shift which happened shortly after the buildings went down. He probably knew that the disastrous event was going to bring about some kind of tikkum olam. The mad man was so happy that he could not hide his feelings. During a conference at Bar-Ilan University, he said:

“We are benefiting from one thing, and that is the attack on the Twin Towers and Pentagon, and the American struggle in Iraq.”[1]

All of those diabolical events, Netanyahu continued to say, “swung American public opinion in our favor.”[2]

Much of America, indeed, did not pay close attention to what the mad man in Tel Aviv was actually saying because the “Khazarian Mafia” had already saturated the culture with the message that Netanyahu was some kind of a savior who will bring world peace, crush terrorism, and promote “democracy and freedom” in the Middle East.

For example, Sean Hannity cannot function without quoting Netanyahu approvingly with respect to issues in the Middle East:

Had the vast majority of Americans known about the diabolical work of the psychopath in Tel Aviv, they would have almost certainly chanted that America needs to send the regime back into the dark ages.

The Zionist media indeed knew that there would have been an uproar if they did not bombard Americans with fake news day in and day out. To suppress serious research, the Zionist media quickly began to label people who began to examine the 9/11 attack “conspiracy nuts.” But politicians in the Middle East were not that blind. Former Iran’s President Mahmoud Ahmadinejad declared then,

“Four or five years ago, a suspicious event occurred in New York. A building collapsed and they said that 3,000 people had been killed but never published their names. Under this pretext, they [the U.S.] attacked Afghanistan and Iraq and since then, a million people have been killed only in Iraq.”[3]

Netanyahu, of course, did not like Ahmadinejad’s statement. As the saying goes, truth always hurts, particularly when you don’t like it. Ahmadinejad, according to Netanyahu, was Adolf Hitler in a physical body.

Ahmadinejad has been out of office since 2013 and Iran still doesn’t have the bomb. In other words, the mad man in Tel Aviv continues to lie. But puppets like Sean Hannity never got the memo. 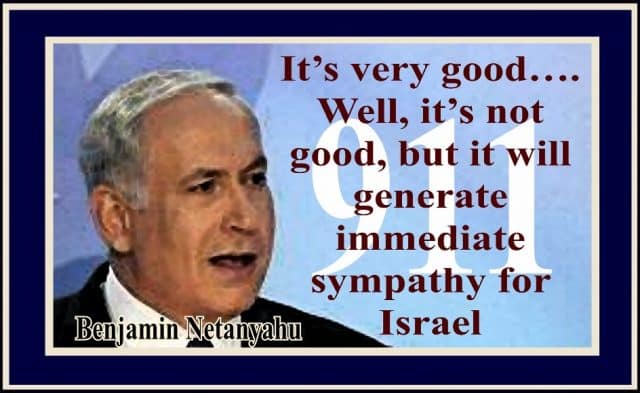 The question that we should all ask is this: If the Israeli regime gets another chance, or if they think that another 9/11 would swing “American public opinion in our favor,” would they do it? Listen to Col. (res.) Dr. Gabi Siboni, director of the Cyber Security Program at the Institute for National Security Studies (INSS) inTel Aviv, and try to read between the line here:

“The disruption and possible infiltration of critical infrastructure is the most severe form of cyber attack. Such attacks on airplanes or air traffic control towers, for instance, means that hackers could cause accidents, or even paralyze entire flight systems.

“As of now, this area of capabilities is the exclusive domain of developed states. I strongly believe however, that the next 9/11 will happen without suicide bombers aboard the plane with box-cutters but will occur because of a cyber incident perpetrated by a terror organization.”[5]

Which terror organization? And why would Siboni even entertain that thought when he does not give us concrete evidence of the so-called terrorist organization?

Furthermore, does Siboni mean to tell us that “ISIS” or “Al-Qaeda” or the Syrian rebels/terrorists have enough technological devices or lucrative and political power to do this highly sophisticated act of terrorism? If so, then the so-called “Jewish genius” as propounded by people like Charles Murray[6] needs revision. Members of “Al-Qaeda” out-think the Dreadful Few?

The next frightening thought is this: What if Siboni’s assessment is a perverse way of saying that the Israeli regime does have enough technological leverage to create another 9/11? Is this far-fetched? Once again, perhaps we need to bring in Israeli military historian Martin van Cleveld:

“We possess several hundred atomic warheads and rockets and can launch them at targets in all directions, perhaps even at Rome. Most European capitals are targets for our air force.

“Let me quote General Moshe Dayan: ‘Israel must be like a mad dog, too dangerous to bother.’

“I consider it all hopeless at this point. We shall have to try to prevent things from coming to that, if at all possible. Our armed forces, however, are not the thirtieth strongest in the world, but rather the second or third.

“We have the capability to take the world down with us. And I can assure you that that will happen before Israel goes under.”[7]

Another issue that needs further exploration is that if Siboni is really worrying about cyber attacks, shouldn’t he explain to us that it was the Israeli regime that created cyber attacks? For example Stutxnet, the virus which actually created panic in Iran, was the invention of the NSA and the Israel.[8]

What Siboni is telling us here is that the real joker in this discussion is certainly the Israeli regime. “Israeli industry is coming to show its technology,” he said. “Israeli companies and American companies are real business partners.”[9]

Netanyahu, back in 2014, put the issue into proper perspective when he said, “We are in a new world. We are preparing with new forces.”[10]

Here Netanyahu was not specifically talking about literal guns and bullets. He was postulating that in this “new world”—and Yuri Slezkine would have called it “The Jewish Century”—psychological warfare must be used to divert important issues, to confuse enemies, and to postulate lies if necessary if necessary.

This became very clear when Netanyahu again declared, “Iran and its proxies take advantage of the security and anonymity of cyberspace.”[11]

About two days ago, Netanyahu twitted:

“Just as the Nazis aspired to crush civilization and to establish a ‘master race’ as ruler of the world while annihilating the Jewish people, o too does Iran strive to gain control over the region and then spread further, with the explicit intent of obliterating the Jewish state.”

How dumb can this be? Isn’t it the Israeli regime that constantly attacks Iran? Wasn’t it the same regime that assassinated Iranian scientists? Listen to this admission by a U.S. official, followed by other testimonies:

All of this has been corroborated by Israeli writers.[12] Again, who is really the joker in this political discussion? Iran?

The answer is no. The Dreadful Few are part of the problem. As Preston James and Mike Harris have recently put it,

“Jesus drove them out of the temple for their evil, anti-social inhuman ways and we must do the same before they mass-murder us all like they did to the Russian Peasants in 1917 and are systematically and progressively doing so to the Palestinians while they steal more and more of their ancestral lands.”

It is past time that we bring those “Khazarian” evildoers to court and charge them for their criminal activity. It is also time that we charge those who forged alliance with them. I am thinking of people like Bush, Rice, Cheney and others.