Home Investigations Hebdo Cockroaches: The War between Kevin Barrett and the “Charlie” Trolls 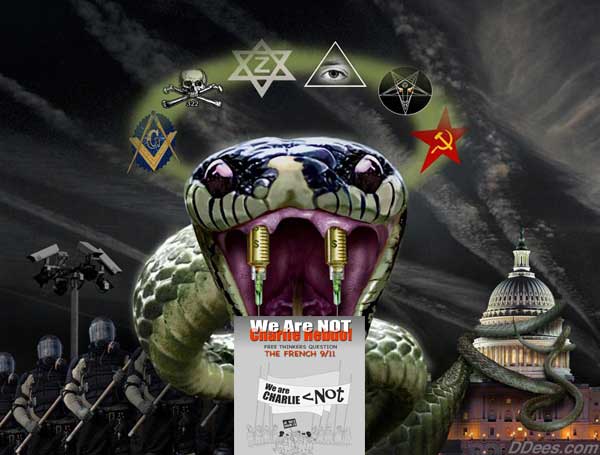 First, they sent the President of France to attack me.

Now they’re sending in the trolls.

Hardly was the new book We Are NOT Charlie Hebdo! available on Amazon, when this review magically appeared:

This book should have been printed on tin foil. Conspiracy theorist and “truth jihadist” Barrett has the grotesque ability to endlessly blame tragedies on their victims, as long as those victims are Jews. Apparently bored with merely denying the Holocaust, Kevin “Gas Chambers? What Gas Chambers?” Barrett branches out to a whole new conspiracy theory: like everything bad in the world, including 9/11, the Charlie Hebdo terror attack was a “false flag” by — you guessed it — the Jews. Oh, sorry, the Barrett-approved euphemism is “the zionists (wink wink).” The ridiculous list of “false flags” Barrett blames on the Jews — ooops, “the zionists (wink wink)” — could fill several books. In fact, it already has.

That’s a psy op, not a book review.

Instead, “Jamie Ritter” launches an ad-hominem attack on me. The main talking point is: “HOLOCAUST DENIER! ANTI-SEMITE!”

There is nothing about the holocaust in the book. And I have never “denied the holocaust” anywhere, nor even mentioned the topic in any of my books. While I am willing to listen to radio show guests like Nick Kollerstrom, a chemistry expert and history of science Ph.D. who argues that the forensic evidence proves there were no massive-scale human gas chambers in the Nazi camps, I have not researched the topic in-depth and have certainly never “denied” anything.  (I listen to guests on the other side, too.)

So why the “HOLOCAUST DENIER” libel?

The psy-oppers behind the “Ritter” review are trying to poison the book so it “contaminates” anyone who wants to host a book event or give it media exposure. When a review like that is the first thing people see on Amazon, the book is “toxic.” Already in Fairfield, Iowa, the local alternative radio station KRUU is apparently afraid to invite me to discuss my talk on Sunday.

The “anti-Semite” libel is a joke. In fact, We Are Not Charlie Hebdo includes essays by three Jewish contributors, two of whom (Rabbi Michael Lerner and Barry Chamish) are strong supporters of the state of Israel, if not all of its leaders and policies. The third Jewish contributor, history professor Lawrence Davidson, is one of a growing number of American Jews who take a critical and skeptical approach to Zionism.

In fact, with three Jewish contributors and seven Muslim contributors out of twenty total, Jews are by far the most over-represented group in the book. There are about 100 times as many Muslims in the world as Jews, yet for some reason we see 100 times the Jewish viewpoints as the Muslim ones in our media. So We Are Not Charlie Hebdo offers Jews (three of them, with four opinions) a disproportionate voice. But it does so more modestly than is usual in American media, while also offering space to Muslims, Christians, and others with markedly different viewpoints.

So please, folks: Don’t let the psy-oppers and their paid trolls kill this book! If you know any lawyers willing to consider suing Amazon and “Jamie Ritter” for libel, please have them email me through my website. And please read the book and submit a review at Amazon’s We Are NOT Charlie Hebdo page.