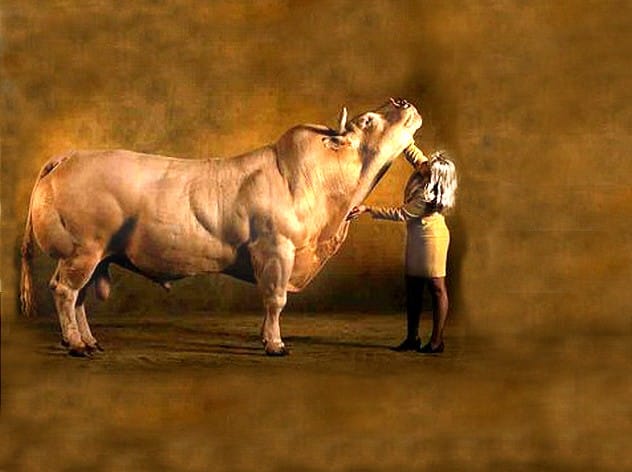 [ Editor’s note: Major food importers like the wealthy Arab states were advised years ago to use their wealth to build vertically integrated agribusinesses to have control of that commodity from the growing fields to the mouths of their own people, and cut everybody else out.

Africa had been in the crosshairs for a decade, and Ukraine is the newest entry on the chopping block, with conditions created with the war for crashing the economy and creating fire sale prices and demands tied with the IMF loans to sell off state assets.

While Kiev’s Parliament is drafting legislation to nationalize Russian property in Ukraine, it will then begin to be transferred into the hand of the oligarchs and their Western looter partners. The UN is powerless to stop any of this. We would need a new United Nations of Lawyers to combat it, but who would fund it?

We are now watching what the old Soviets used to describe as the greedy goal of Western capitalism, with the added irony of Putin and Lavrov standing firm to protect their own people from a similar fate.

But saddest of all is the brain-dead Western rank and file military people, who are slotted to be used as the muscle against anyone who objects too much to this neo-colonialism.

After watching it being done to the future of their own families here in the US for example, they offer themselves to “do unto others” what the target victims are not trying to do to America. They are no longer defending their countries as much as the business operations of the mega elites, which I don’t remember being in the oaths they took when entering the service of their country… Jim W. Dean ] 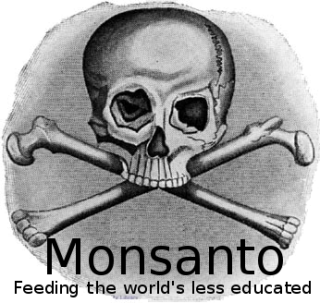 It is believed that there are just over 1.4 billion hectares of land potentially suitable for agricultural production in the world.

According to many Western experts, today agricultural land assets are highly profitable business investments, and therefore in the coming years alone, allocation of about 150 billion dollars by various countries for the purchase of agricultural land is projected.

Among the reasons for this, the prediction of a steady increase in food prices is indicated in particular. For instance, it is expected that by 2017 the price of wheat and barley will rise on average by half, and the cost of sunflower will double.

In this regard, the purchase of agricultural land outside the national territory has already been elevated to the rank of state policy in a number of countries. In particular, it is typical for the Persian Gulf States, China, South Korea, India, Japan, the United States, and other countries.

Thus, the Arab sheiks are well aware that they will be able to survive on “black gold” for only a couple more decades, during which the oil may lose its position as the leading energy source, and therefore they are preparing contingency plans for themselves in advance – buying agricultural land.

Probably the most attractive territory in terms of low-cost transactions for the sale of land was considered Africa until recently. However, a real “boom” currently belongs to Ukraine, which is now immersed in a deep financial and economic crisis and suffering from anarchy. And the reason for this is low prices, the absence of land legislation to protect the rights and interests of a local population, and low production costs, which are so attractive to potential buyers.

According to rough estimates, today on the African continent alone, foreigners own or lease more than 60 million hectares, which is an area more than twice the size of Great Britain. As a rule, the cost of renting land in Africa is purely symbolic. In particular, in Ethiopia, the rate is a 1 dollar 20 cents per hectare per year. Buying land is cheap, too – up to $20-30 per hectare.

In recent years, land in Africa began to be bought by developed countries of the West, and the pioneers here were Germany and the United States. In general, firms from these countries grow GMO crops and oil palms, the harvest of which is used in the production of biofuels.

The US company Monsanto, a leader in the production and distribution of GMO products, has been particularly active in this regard.

The University of Iowa in conjunction with the American company AgriSol has recently started a project in Tanzania worth $700 million, resulting in 162,000 African residents being displaced from their residences in areas of Katoomba and Misham.

And this is not really surprising, because the new “master of the land” has never been concerned with the problems of a local population: not in the Middle Ages, and even less today.

Given the unsustainable level of corruption in government agencies of the USA, often these new “landowners” are Americans, who have used their position to this end. For example, former US ambassador to Sudan Howard Eugene Douglas founded Kinyeti Development Company with “registration” in Texas, which became the owner of 600 thousand hectares in this African country.

It is very remarkable that Douglas, at the beginning of his work on land purchasing, served as coordinator for refugees in Sudan, i.e. he himself multiplied the refugees, having driven them from the land now owned by his company.

Today, land acquisition takes place on a large scale, and to a casual observer, it goes by quite unnoticed since this process is not centralized. Often the process of land purchasing is not advertised and occurs under shadow schemes because in many countries the sale of land to foreigners is banned. In such cases “joint ventures” are created, which allow bypassing the laws of virtually any country.

Ultimately, buying land will reveal its true meaning – colonialism: if previously a colony had to be created by seizing territory by force, now it is sufficient to buy it, but the result is the same – the owner of the territory changes and it is controlled by the new owner.

As for Ukraine, according to the State Inspectorate for the control and use of land in this country, following the “advice of the West on the privatization of state property”, 75% of arable land out of 33 million hectares of agricultural land is already privately owned.

After all, the new Kiev authorities were pushed in this direction by The New York Times, which wrote last May that “the revival of Ukraine can begin with the agricultural industry – all you need is just to remove unnecessary barriers to control and, then, as they say, the investments will come.”

Despite the fact that the moratorium on the sale of land in Ukraine was officially extended to January 2016, after the “Kyiv Maidan” came to power in 2015, the scheme to lease the land for up to 50 years has been actively used for the enrichment of new authorities and is now quite appealing to “independent” investors.

Much of the land is concentrated today among those Ukrainian oligarchs with close ties to new authorities and the West, such as Sergei Taruta, Vadim Novinsky, Victor Nusenkis, Yuri Kosyuk, Vladimir Shkolnik, Andrew Verevskiy, as well as in the hands of large European and US agricultural holdings. The latter are attracted by the cheap and fertile black soil of Ukraine – the best place in the world for the cultivation of genetically modified products and crops for biofuel production.

Monsanto and Cargills — If we don’t do it, someone else will

These US agricultural holdings include, first of all, the company infamously criticized in many countries, Monsanto – one of the largest producers of genetically modified seeds. This corporation has already announced a multi-million dollar investment in the agricultural sector of Ukraine. The same will be done by another American manufacturer, the Cargill Agrarian Holding, DuPont Chemical Concern. 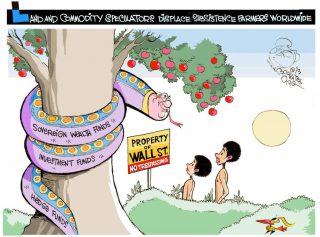 According to the Director for Strategy of the Oakland California Institute, Frederic Mousseau, who deals with issues of food security and climate change, the excessive growth in Western investment to the agricultural sector of Ukraine in recent months “can be equated to Western corporations buying Ukrainian agriculture”.

Meanwhile, the financial organizations of the West, particularly the World Bank and the International Monetary Fund, linking the interests of Western capital with the provision of new loans to Ukrainian authorities, have attached the condition to them: money in exchange for the weakening of state control in the agricultural sector, including the turnover of GMOs.

As a result, some foreign investors will become the direct owners of Ukrainian agricultural enterprises. For instance, the American concern Cargill already owns more than 5% of the largest Ukrainian holding UkrLandFarming, and actively trades pesticides, GMO seeds, and fertilizers produce feed, and owns silage here. In addition to the US companies, now about 40 German agricultural enterprises are represented in Ukraine, most of which work on areas from two to three thousand hectares.

According to the database (Land Matrix) of the German Institute of Global and Area Studies (GIGA) located in Hamburg, about 1.7 million hectares of Ukrainian farmland are owned by foreigners today.

It is noteworthy that in addition to private companies and individuals, the farmland of Ukraine has recently been viewed with increased interest by the American pension fund NCH Capital, which leased 450,000 hectares of land and is also involved in the cultivation of GMO products.

German MPs already expressed their concern with the massive use of Ukrainian farmland by American companies producing GMO products a few days ago, fearing that harmful GMO products will have a very negative impact on the health security, not only of persons living in Ukraine and bordering areas but also across Europe.

Unfortunately, this problem does not at all bother the current Kiev authorities, who, understanding the temporal limitations of their powers and already anticipating a collapse in the near future, are only interested in their own benefit, and they just are not going to think about the health and future of their citizens and the citizens of Europe.