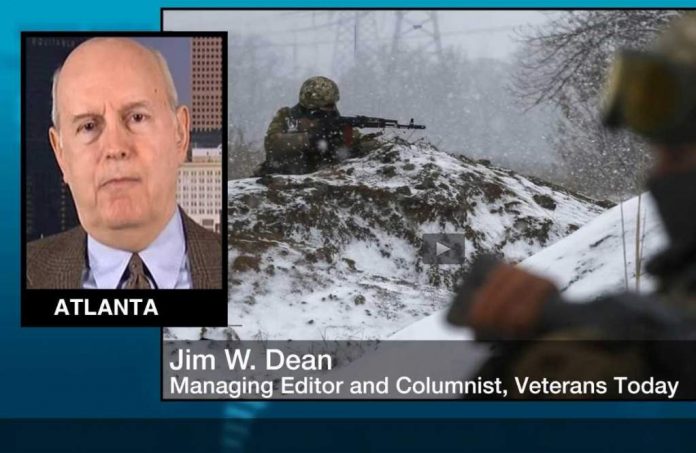 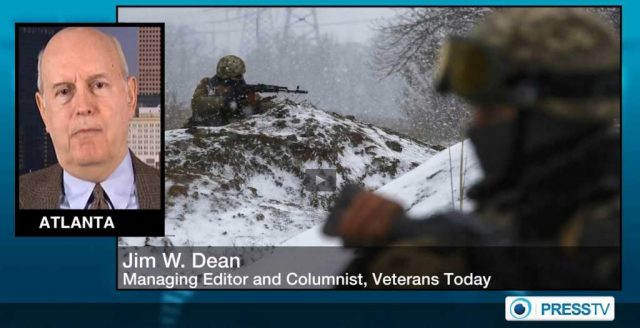 You can listen to the 5:30 minute phone interview here.

An American political analyst in Atlanta says Kiev is violating the Minsk peace agreement that was signed over the crisis in eastern Ukraine, not Russia.

Jim W. Dean, the managing editor and columnist at Veterans Today, made the remarks in a phone interview with Press TV on Saturday while commenting on US Secretary of State John Kerry’s claim that Russia is violating the ceasefire.

The US State Department said on Thursday that Kerry and Russian Foreign Minister Sergey Lavrov spoke by telephone on Wednesday. Kerry urged Moscow to pull out forces from eastern Ukraine and press anti-Kiev fighters into observing the ceasefire.

The top US diplomat said the presence of Russian convoys and military equipment in eastern Ukraine shows that the ceasefire deal has not been fully observed.

Dean said Kerry’s statement is like “the pot calling the kettle black”.

The Minsk Protocol was an agreement to halt the war in the Donbass region of Ukraine, signed on September 5, 2014. By January 2015, however, the Minsk Protocol ceasefire had completely collapsed. A new package of measures meant to stop fighting in the Donbass, called “Minsk II,” was agreed to on 12 February 2015.

“Virtually all of the shooting violations were on Kiev’s side. What went on is when Kiev broke the ceasefire by firing on the Republics, they would reply, and then Kiev would file a report with the monitors that they had been attacked,” Dean said.

He added that “most of the ceasefire violations were on Kiev’s part. And as this went on, there was never a word in the public Western media about what’s the West was going to do to make Kiev comply” with the terms of the Minks agreement.

He further said that although the US didn’t sign the agreement, “it really turned into a tremendous embarrassment for the American people.”

Dean said that unless Russians have “stealth troops and stealth armor that just quietly and magically rolls across the border while the border guards are having their dinner, there aren’t any military formations there.”

Washington accuses Moscow of providing heavy weaponry and training to pro-Russia fighters and of deploying troops and air defense systems in eastern Ukraine.

If that’s the case, where are the satellite photos? Where are the communication intercepts, that we know they have the ability to have, Dean asked.

Russia denounces the US accusations as baseless and says Washington is responsible for the escalating tensions in Ukraine by sending arms in support of the Ukrainian army.

The United States and the European Union have imposed several rounds of sanctions on Russia, including visa bans and asset freezes.