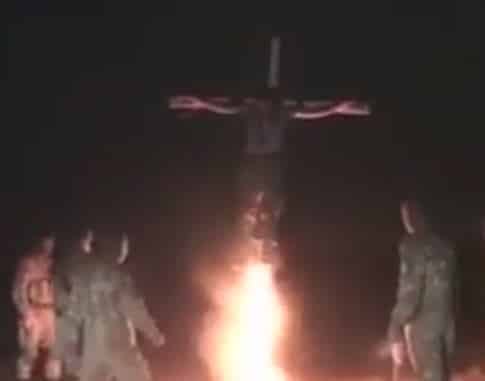 The image above is a screen shot I took from a video purporting to show members of the Azov Battalion crucifying and burning a supporter of the separatist movement in Donbass, in eastern Ukraine.

It’s hard to say for sure whether the video is real or a fake, but it looks real, and it was removed from YouTube yesterday roughly an hour after it was uploaded. It has since been re-uploaded in several places, including here and here. Impossible to say, of course, how long any of these may last, so if you have a desire to view the video you should probably go ahead and click on the links.

I’m not embedding the video with this article because it is quite graphic (that is, assuming the reality of it), and what the victim goes through, or appears to go through, as his hands are nailed to the cross, is horrendously cruel and brutal.

The Azov Battalion is now, in the wake of the new video, being called “Ukraine’s ISIS.” They have also been described as “Nazis.” But of course we can detect some striking differences between “Nazis” of the past and those of today.

In the 1930s, the Nazis of Germany took control of their nation by removing Jews from positions of power and putting them to work in work camps. History books and Hollywood have referred to this as a “holocaust” (whether it was or wasn’t is a debate I’d probably just as soon not get into here), and for a long time hardly anyone questioned it, although in the last fifteen years or so this has begun to change. But the key point is that the Nazis of Germany’s past did not care for what their country had become under the rein of Jewish financial power and decided to make a change.

This of course does not in any way describe the “Nazis” of today in Ukraine–who seem to have no objections whatsoever either to the Jewish oligarchs running the country, or to the Jewish technocrats being installed by the US into positions of authority in the Ukrainian government.

Be that as it may, Russia continues to refer to Ukrainian nationalists like those serving in the Azov Battalion as “Nazis,” I’m not really sure why, although I assume it simply fits in with Russia’s political narrative.

In September of last year, The Guardian published a story about the Azov Battalion, exploring the “concern” felt by some members of the public over “the far right, even neo-Nazi leanings of many of its members.”

Mainstream media largely have dismissed such allegations about “Nazi-leanings” in Ukrainian nationalists, crediting the theory as wildly overblown and a result of “Russian propaganda.” The Guardian report, however, does seem to ascribe some veracity to the argument.

One unidentified member of the battalion is quoted as saying, “Putin is a Jew,” and is also described, elsewhere in the story, as having “waxed lyrical about Adolph Hitler as a military leader.” But given the fact that the person quoted is not named, and that The Guardian, like the rest of the mainstream media, has been a conduit of anti-Russian propaganda, I’m not sure how much credence to place in the piece. 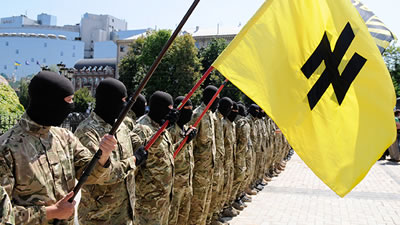 But yet also worth mentioning: one person the reporter, Shaun Walker, does reference by name is the Jewish oligarch, Serihy Taruta, who, he informs us, has provided “funding and assistance” to the Azov Battalion. And we also hear from Alex Kovzhun, one of Taruta’s aides, who, according to Walker, believes the political views of the battalion members are of no particular importance–and who also even denies that the insignia of the group is Nazi-linked.

“The views of some of them is their own affair as long as they do not break the law,” said Kovzhun in written answers to questions. “And the symbol is not Nazi. Trust me – some of my family died in concentration camps, so I have a well-developed nose for Nazi shit.”

The “Nazis” of today profess themselves admirers of the Ukrainian historical figure Stepan Bandera, who in the 1930s and 40s did indeed form an alliance with the German military. But maybe there was an element of mistrust in the relationship, and maybe it was an alliance based more on pragmatic reasons that ideological ones. That at least seems to be the gist of articles here and here. Again, though, what is fact and what is propaganda can be difficult to sort out these days.

Perhaps all that can be concluded with any surety is that Jews and modern-day Nazis have on some level formed themselves into sort of a mutual admiration society, and if that is the case then perhaps there is something significant in the manner of execution chosen by the Azov Battalion members shown in the video–this of course is assuming, again, that the video is genuine.

One thing, however, is certain, and that is that propaganda has become a battle hymn and is being amplified to a grade of thunder heretofore unseen and unheard. Lies–about virtually everything, but particularly about wars such as the one in Ukraine–are the rule rather than the exception.

And this means that the reality in which we find ourselves is very leaky and porous. Molds, and all the assumptions and beliefs we have for years managed to fit into them, are increasingly becoming faulty and inapplicable and worthy of being tossed. But maybe in a way there is a silver lining in that. For two molds that particularly seem to have exceeded their expiration dates are, 1) Jews as devout, holy, perennially guiltless, chosen by God, and unjustly victimized; and, 2) Nazis as vicious, depraved, bloodthirsty, sadistic and the personification of evil.

How many things on this earth are really that black and white? Not many. And for this reason it is probably time to toss both of them.