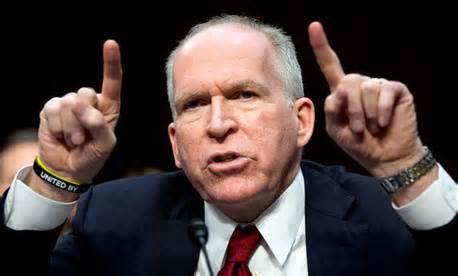 [ Editor’s Note: The retreat trumpet has sounded, or has it? These are surprising statements in terms of the public admission part only. That we had a failed policy is no secret, but there is a twist to that.

Color me suspicious, but I smell a ruse here. When a guy like Brennan is pitching a political settlement, I interpret that to mean the US and its allies are getting what they wanted all along — to carve up Syria and fulfill a secret promise to the Saudis to get their pipeline through Northern Iraq, to export gas and oil to the EU.

Our VT analysts all agree the coalition air campaign was never intended to really hurt, much less defeat, ISIL. We never put the air assets into the nearby bases to pin ISIL down.

And our suspicions that Israel and the US (possibly via contractors outside the chain of command) had been providing a lot of support to ISIL, with Turkey’s involvement, have been confirmed.

If we had worked closely with the Syrian army for boots on the ground, that would have been a serious effort. Refusing to do that months ago, and now to be making these pitiful “We Can’t Win” noises are crocodile tears indeed.

But we see a predicted problem that no one will admit to being the father of the failed US policy, and that the ISIL genie is not going to be put back into the bottle, not by any political settlement that is not a complete surrender.

Sure, ISIL may leave some of the areas they are in now, but they will just go somewhere else to create more mayhem. And then someone else will have a chance to say some day, “We cannot defeat them on the battlefield” again.

But as the victims keeping piling up onto the Wahhabi sacrificial fire, the US strategists and their behind-the-scenes partners will always be held responsible for letting them loose upon us. We are going to have to challenge the concept of diplomatic immunity for state-sponsored terrorists and their supporters.

The way to defeat them is to declare a year-round hunting season for them all, with full diplomatic immunity and rewards for those who bag them. And that should certainly include some of the American terrorists in suits. I have added Fred Kagan’s wiki bio at the end as an example of a potential suspect… Jim W. Dean ]

“I believe firmly that we’re not going to resolve this problem on the battlefield,” Brennan said during an appearance on CBS’s “Face the Nation”, aired on Sunday.

The CIA chief argued that it was up to the Iraqi and Syrian governments to decide how they are going to restore peace in their nations.

“There has to be a viable political process that’s able to bring together the actors inside Iraq and Syria and for them to be able to decide how they are going to have a peaceful future,” he said.

“So it’s a combination of military and political pressure that needs to be brought to bear,” added Brennan, who served as chief counterterrorism adviser to President Barack Obama before heading the CIA.

In recent weeks, senior officials and military experts have raised similar concerns about the US strategy against ISIL.

“We are not only failing, we are losing this war,” General John M. “Jack” Keane, who previously served as vice chief of staff of the US Army, said during a hearing at the Senate Armed Services Committee last month.

Frederick Kagan, a director at the conservative American Enterprise Institute, told the Senate panel that regaining the momentum against ISIL would require up to 20,000 US troops on the ground in Iraq.

In 2006, Keane and Kagan both advised former president George W. Bush to drastically increase troops in Iraq when it became clear the US strategy was failing.

Last September, Obama announced an open-ended military air campaign to “degrade and ultimately destroy” the ISIL forces in Iraq and Syria by enlisting the support of scores of allies.

Congressional Republicans have also been highly critical of Obama’s strategy, including his refusal to deploy combat troops on the ground in Iraq. They cite the fall of the Iraqi city of Ramadi to ISIL and the group’s recent gains in Syria as the latest signs that Obama’s strategy to defeat the terror network is failing.

Brennan, the CIA director, disputed the idea that the US intelligence community has been caught off guard by the new wave of ISIL attacks. “We saw a growing strength.”

Many of the so-called moderate militants, who were trained by the CIA in 2012 in Jordan to battle the Syrian government, later joined the ISIL terrorist group, according to several reports.

The US plans to finish the training of 3,000 militants in Syria by the end of 2015 and an additional 5,000 by next April, the Pentagon says.

Kagan’s brother is foreign policy analyst Robert Kagan, whose wife is Victoria Nuland, Assistant Secretary of State for European and Eurasian Affairs. Frederick Kagan is married to Kimberly Kagan, president of the Institute for the Study of War.

Frederick Kagan and his father Donald Kagan, who is a professor at Yale and a fellow at the Hudson Institute, together authored While America Sleeps: Self-Delusion, Military Weakness, and the Threat to Peace Today (2000). The book argued in favor of a large increase in military spending and warned of future threats, including from a potential revival of Iraq‘s WMD program.[1] Frederick along with his brother Robert Kagan, a member of the Aspen Strategy Group, and their father Donald are all signatories to the Project for the New American Century manifesto titled Rebuilding America’s Defenses (2000).[2]