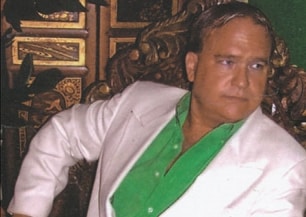 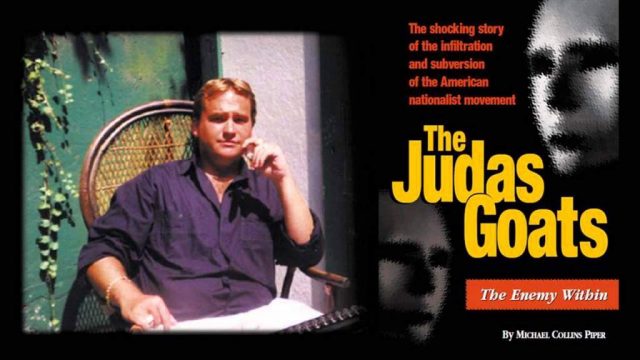 Two days ago, Michael Collins Piper, aged 55, died in a hotel room.  Collins led the war against AIPAC and the ADL and the Kosher mafia when others now considered “experts’ knew nothing at all.  News quickly spread about his “heart condition” and how he died of natural causes.  Then again, Abe Foxman is still  alive and Netanyahu’s attic portrait is oozing hideousity.

I believe Piper was likely murdered.  Moreover, I also believe his heart condition was induced as well.  I believe this for reasons, reasons like Michael Hastings and John Wheeler and John O’Neill and Serena Shim and Mike Ruppert and Gary Webb and Roland Carnaby.

I believe it when I find someone who had become vulnerable, an easy target and easy “example”, and someone having a Wikipedia done by the Mossad like the one below:

Michael Collins Piper is a political writer, conspiracy theorist,[1] and talk radio host living in Washington D.C.. He is a regular contributor to the American Free Press, a newspaper backed by Willis Carto noted for its antisemitism, White separatist and White nationalist themes. Piper’s books and articles have also been featured by a wide-ranging and eclectic variety of websites, ranging from “left” to “right” including America First Books, anti-SemiticVT, PressTV, the racistneo-naziVanguard News Network and the website of Holocaust denierDavid Duke.

Piper was described on his website as a political “progressive in the LaFollette–Wheeler tradition.”[2] He is the author of books such as The High Priests of War, in which he criticizes the neoconservatives in the Bush administration, and Final Judgment, where he claims that the IsraeliMossad was responsible for the assassination of U.S. PresidentJohn F. Kennedy.

He has been attacked by many Jewish groups such as the Anti-Defamation League (ADL) of B’nai B’rith, the Simon Wiesenthal Center, and the Middle East Media Research Institute (MEMRI), some of which have called him a promoter of antisemitic conspiracy theories and a Holocaust denier.[3]

Carefully timed to his death is a distasteful concerted attack on him in Wikipedia that traces back to Israeli intelligence.  Those who produced this smear/bio, well outside any Wikipedia guidelines are also regularly tied to cover ups like Charlie Hebdo, the Boston Marathon bombings and Sandy Hook.

It is best to assume Piper was murdered.  He was a target, he was living in a hotel in Idaho, he had been living in a cabin but it was “accidentally” burned down.  This put him in a hotel where his body could be conveniently found.

I’ve been to this dance before.

Let’s take the Wikipedia alone.  114 contributors did this smear job, most of them don’t exist, dead IP addresses, here is one of them:

This is an admitted “Israel lover” who smeared Michael Collins Piper but Wikipedia put the work of an admitted psychotic out of reach, sanctified though it violated every tenet of whatever standards Wikipedia claims to have.

Attempts to add substance or balance to the Wiki were immediately removed but the garbage stayed, on a page that is earmarked to be continually monitored but one where there is no mention of controversy nor is there any question of the wild and unsubstantiated libelous insanity it carries.

We might want to take a second or two to discuss Wikipedia.  Were it not for an army of Tel Aviv and Haifa housewives who work off their welfare payments writing smears and playing the toad in chatrooms and comment boards, the rest of Wikipedia is quite something.

Michael Collins Piper was culled from the herd, killed because he had no support, no powerful friends and a shrinking following.  Collins, Bollyn and others worked for Willis Carto, a man who got much very right, by my estimation at least, and some things right also, but things I am not so comfortable with.  As a sanctified “Northern European” who actually visits real places, there is a reason that Norwegians, Swedes and Germans are often quite miserable people.

Anyone who thinks they know Germany who calls it by that name, “Germany” obviously knows nothing at all about a nation stuck together less than 150 years ago.  My grandmother was born in “Germany” when that nation was one year old.  When we don’t know history, we make it up.

Is there  “Jewish conspiracy” and did the holocaust really happen?  No sane person doubts a “Zionist conspiracy” and, as for the holocaust, based on the efforts to silence any investigation, scientific or otherwise, I think we know where that one is going.

Collins is dead.  They will murder more, but let them head into Lebanon first and meet with Hezbollah again.