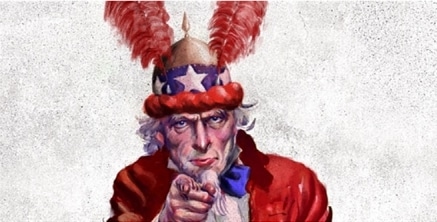 TEHRAN (FNA)- Al-Jazeera America in a Wednesday article launched a misinformation campaign to misrepresent the atmosphere prevailing over the public opinion in Iran towards a nuclear deal and ties with the US, but the lengthy piece which has been built on the falsified message of a billboard photo in Tehran has turned into nothing, but the gaff of the century for the Qatari media outlet.

The astonishingly reckless article “The Iran deal is too big to fail” by Stephen Kinzer seeks to convince the western audience how much Iranians adore US President Barack Obama through a trail of systematic misinformation, while his centerpiece proof and evidence – a photo that is described in detail, but not displayed in the article – very evidently and expressively shouts the opposite and portrays how much Iranians hate the US president!

The article is based on, in Kinzer’s words, “a full-length, 40-foot-high photo of President Barack Obama alongside an ancient Persian warrior, both wearing spiffy pairs of shoes. ‘Be safe and comfortable. Walk with us,’ reads the slogan underneath”.

Kinzer, who mentions later in the article that he had a two-week trip to Iran in May, says the photo “towering over one of Tehran’s main squares” “is an advertisement for an Iranian shoe company — and a sign of how fervently Iranians are hoping for a nuclear agreement that would ease economic sanctions and perhaps open a new era in relations with the United States”.

But to much surprise the Al-Jazeera piece does not show the photo, although the rest of the article is built on this opening centerpiece. As you can read from the comments left by readers down the page, the western audience, who is completely a stranger to the Iranian society and has not seen the photo is easily deceived after being bombarded by the trail of wrong information that he has been presented so far, irrespective of the rest of the article which contains more misinformation. Why?

This is the photo that Mr. Kinzer – in his only truthful phrase that can be found all throughout the article – describes to be“towering over one of Tehran’s main squares”.

Despite what Kinzer claims, President Obama is standing alongside the most hated person in not just the Iranian, but the Shiite, community throughout the world and throughout the history, and everyone with the least knowledge of Iran or Islam can realize who the guy in red is. He is Shimr who is even disgusted and cursed by many Sunni Muslims as well as Iranian Christians and Jews, because he killed the Shiite Islam’s third Imam, Hossein the son of Ali (the first Shiite Imam) and grandson of Prophet Mohammad (peace be upon them all) in a 680 A.D. battle fought on the plains of Karbala, a city in modern Iraq that’s home to the Imam’s holy shrine.

In the battle, Imam Hossein (PBUH) was decapitated and his body mutilated by Yazid’s army. All of Imam Hossein’s male family members (including his 6-month-old baby), relatives, friends and companions who all together formed a 72-member army were beheaded in an unequal war with a 30,000-strong army of the enemy in the desert of Karbala. And Shimr is the most hated among the three top commanders of Yazid’s army. Shimr and Yazid exemplify the leaders of modern day Islamic State of Iraq and the Levant (ISIL).

But, this is not just a simple media gaff resulted from a wrong interpretation or lack of knowledge of a foreign visitor completely unfamiliar with Iranian society or Iranian and Shiite history, religion and culture, because the misinformation campaign continues with a stronger tone.

As Kinzer says there is a slogan down the photo and contrary to Kinzer’s translation “Be safe and comfortable. Walk with us”, the true translation is “Be with Us, (and) Be Safe”, and then, as you can see in the white part below, it says:

Then comes the line in grey:

‘Be with Us, (and) Be Safe’ in the year 2014 (the Christian calendar – referring to developments in modern day.)

The Al-Jazeera piece skips these two lines, in addition to the fake translation presented for the first line.

There is no need to argue that the guy in red is the murderer of the most revered Shiite Imam who has been admired even by the Communists and atheists in not just Iran, but throughout the world and by many most well-known foreign leaders like Mahatma Gandhi. Any Iranian or Shiite recognizes the character in the first glimpse as his clothing and the red color are enough. The story of Karbala is staged in religious acts for ten days in every neighborhood in Iran and in many other countries where Shiite communities live, like Iraq, Pakistan and Afghanistan. The religious play which is called Ta’ziyeh (the mourning play) and recounts Imam Hossein’s martyrdom through a rich body of prose and poetry has even been staged in reputable theater halls in many western countries like France, in addition to many Near, Middle and Far East countries and in Central Asia and Africa.

In Ta’ziyeh, the army of Imam Hossein are all dressed in green, and the army of Yazid is dressed in RED. And that’s a main reason why Iranians and Shiites never wear RED in the ten-day-long mourning ceremonies for Imam Hossein and his companions at the beginning of the lunar month of Muharram.

There are so many other elements present in this photo that even make the caption unnecessary for any Iranian, from any ethnicity, culture or religion, to easily grasp that the person in red is Shimr. And Shimr is so deeply hated by Iranians that whenever they want to describe a blood-sucker like former Iraqi dictator Saddam Hussein, they compare him with Shimr saying ‘the guy is such a Shimr’.

One could be easily deceived here by thinking that Kinzer has been the victim of wrong translation by a passer-by who happened to be not a good English speaker, and that could – yet with a very low possibility – be the case if the misinformation didn’t continue.

Kinzer says the photo “is an advertisement for an Iranian shoe company — and a sign of how fervently Iranians are hoping for a nuclear agreement that would ease economic sanctions and perhaps open a new era in relations with the United States”. The sentence starts with deceitful information and that underlies the wrong conclusion. Why? Because this is not at all a shoe company advertisement: it neither belongs to a shoe or any other company nor is an advertisement. Anyone who visits Tehran can see this and some other similar photos hanging on the walls, lampposts, etc. and they are so eye-catching that they cannot go unnoticed by anyone. And all of them have a very obvious political meaning.

This is again the same Shimr right beside a US/Israeli soldier overhead a victim. Even the way the victim has been forced down to the ground with his face down resembles the way Shimr killed Imam Hossein: cutting off the head from behind the neck.

And if there is any doubt left, this last one portrays Imam Hossein in direct war of swords with the Shimr/Obama enemy.

The Obama-Shimr photo is so expressive, even for a complete stranger, that Al-Jazeera has not displayed it in the article, and Kinzer resorts to forgery in translation – “…comfortable. Walk with us” – and purposefully ignores the next two lines and, and, and … to deceive the reader.

Yet again the mis- or disinformation campaign never stops; it runs all throughout the article to the end, like when the reader is told that the “Down with the USA” signs on the wall of Iranian cities are gone. Any reader that does a little search on the net will see hundreds of such signs on the walls of buildings in every city and town throughout the country.

A line-by-line explanation about the mis- or disinformation campaign running through the Al-Jazeera article or a discussion of its possible goals and objectives is beyond the scope of the present piece and could grow wearisome and boring; yet, one point cannot go unseen.

Although Al-Jazeera claims down the page that it bears no responsibility for the contents released on the website, no one could accept that the media outlet which happens to be based in a Muslim state pretty well acquainted with, and rather much knowledgeable of Islam, would release every news or article that it receives from anyone. Similar sentences appear down the page of many media outlets, yet none would release a word before checking and verifying the contents to make sure what they release complies, at least, with minimum standards and professional codes of journalism and ethics or their policies, unless they intend to ruin its reputation or make a mockery of itself.

Well, the Al-Jazeera article has already made itself a satirical media for Iranians. The piece is surfing in the social media as “the joke of the year”.

Colleagues at Al-Jazeera should show more respect for the common sense, power of wisdom and understanding of their readers both for the no-responsibility assertion they make down the page and for the watery arguments and opinions that they present.

Yet, irrespective of the goals pursued by the Qatari media outlet through this mis/disinformation campaign, this genius article is sure seen by many in the profession and those outside as the “Gaff Of The Century”.