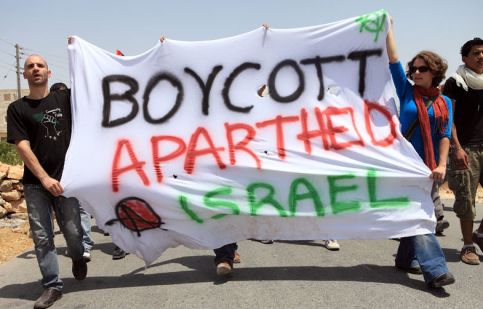 by Uri Avnery  with Gush Shalom

Editor’s note: The BDS boycotters need to go to coffee shops with Jews, all over the world, in a friendly gesture. They need to take the paper coffee cups after use and submit them for DNA testing, as in a James Bond movie, and collect and publish the results of the DNA tests on a website.

If half of the world’s Jews get exposed for not having Semitic DNA, then the dialog might start to change. For example, my genome carries 2.6% Denisovan  from my father’s line from the Ukraine, Poland, Russian area depending on what map you look at and what period.

The standard test does not look for Semitic genes, but that might be a good idea to see who really does carry the bar code deed to the land of Israel. We might then all become Israeli citizens and vote the pretender out of office.

I also have 1.7% Neanderthal genes, and the hairy back to prove it, but I already knew that. Most European Americans will have a range of similar percentages. As the years go by, more and more studies are taking us closer to the migration paths of our ancient ancestors, with surprises popping up all the time.

If God gave Israel to our ancient ancestors, why shouldn’t we all be included as possible inheritors, in what could be the biggest probate case dispute of all times. I can’t wait to get started.

Dr. Eran El Haik blew the lid off the blood line claims with his unbiased comparative study in 2012 and which VT helped get international attention for with our March 1, 2013 article New Genome Study Destroys Zionist Claims to Palestine. His study destroyed the fake lineage claims that the Zionists had already thought they had nailed down with their trolls.

The battle was at first waged among the genetics community, where the Zios felt they would have El Haik, unfortunately for them an Israeli. But when the story broke out into the mainstream, the situation reversed. The fakers went quiet.

Dr. El Haik pulled a brilliant counter attack by challenging all of his Jewish genetics detractors to submit to DNA testing, where their results would be published in a blind pool to finally settle how much DNA from the land of biblical Israel they carried. He had ZERO takers, but that was not widely publicized.

The well funded proponents of the communist-atheist militant Zionists’ biblical claim to the land have defended their position of the basis of volume of material published, when we all know that Israel’s crimes against humanity had to have some biblical cover so opponents could be trashed as “being against God”, as tens of millions of American Christian Zionists will be happy to tell you.

Here is the dramatic reading that Snordster did on my Elhaik piece…which gave me goose bumps. It’s eerie hearing someone read your work for the first time. That reminds me, we have not heard from him in a while. I need to see how he is doing and hope not to get any bad news

It is being adapted to use against people all over the world, and we find the usual suspects involved wherever it pops up. They hate Uri because they can’t get away with calling him a Nazi or Ku Klux Klansman, their preferred method of disposing of someone publicly… Jim W. Dean ]

Binyamin Netanyahu was racking his brain. His whole career is based on fear mongering. Since Jews have lived in fear for millennia, it is easy to invoke it. They are fear addicts.

For years now, Netanyahu has built his career on fear of the Iranian Nuclear Bomb. The Iranians are crazy people. Once they have the Bomb, they will drop it on Israel, even if Israel’s nuclear second strike will certainly annihilate Iran with its thousands of years of civilization.

But Netanyahu saw with growing anxiety that the Iranian threat was losing its edge. The US, so it seems, is about to reach an agreement with Iran, which will prevent it from achieving the Bomb. Even Sheldon the Great cannot prevent the agreement. What to do?

Looking around, three letters popped up: BDS. They denote Boycott, Divestment and Sanctions, a worldwide campaign to boycott Israel because of its 48 year-old subjugation of the Palestinian people.

Ah, here we have a real threat, worse than the Bomb. A second Holocaust is looming. Brave little Israel facing the entire evil, anti-Semitic world. True, until now Israel has suffered no real damage.

BDS is more about gestures than about real economic weapons. But who is counting? The legions of anti-Semites are on the march. Who will save us? Bibi the Great, of course!

Honest disclosure — my friends and I initiated the first boycott, which was directed at the products of the settlements.

Our peace movement, Gush Shalom, was deliberating how to stop the spread of the settlements, each of which is a land mine on the road to peace. The main reason for setting up settlements is to prevent the two-state solution – the only peace solution there is.

Our investigators made a Grand Tour of the settlements and registered the enterprises which were lured by government enticements to set up shop beyond the Green Line. We published the list and encouraged customers to abstain from buying these products.

A boycott is a democratic instrument of protest. It is non-violent. Every person can exercise it privately, without joining any group or exhibiting himself or herself in public.

Our main aim was to get the Israeli public to distinguish clearly between Israel proper and the settlements in the occupied territories. In March 1997 we held a press conference to announce the campaign. It was a unique event.

Still, the idea spread. I don’t know how many thousand Israelis are boycotting the products of the settlements right now. However, we were upset by the attitude of the European Union authorities, who denounced the settlements while in practice subsidizing their products with customs exemptions like real Israeli wares. My colleagues and I went to Brussels to protest, but were told by polite bureaucrats that Germany and others were obstructing any step toward a settlement boycott.

Eventually, the Europeans moved, albeit slowly. They are now demanding that the products of the settlements be clearly marked.

The new BDS movement has a very different agenda. They want to boycott the State of Israel as such. I always considered this a major strategic error. Instead of isolating the settlements and separating them from mainstream Israelis, a general boycott drives all Israelis into the arms of the settlers. It reawakens age-old Jewish fears. Facing a common danger, Jews unite.

Netanyahu could not wish for more. He is now riding the wave of Jewish reactions. Every day there are headlines about another success of the boycott movement, and each success is a bonus for Netanyahu.

It is also a bonus for his adversary, Omar al-Barghouti, the Palestinian organizer of BDS. Palestine is well stocked with Barghoutis. It is an extended family prominent in several villages north of Jerusalem.

The most famous is Marwan al-Barghouti, who has been condemned to several life sentences for leading the Fatah youth organization. He was not indicted for taking part in any “terrorist” acts, but for his role as organizationally responsible. Indeed, he and I were partners in organizing several non-violent protests against the occupation.

When he was brought to trial, we protested in the court building. One of my colleagues lost a toenail in the ensuing battle with the violent court guards. Marwan is still in prison and many Palestinians consider him a prospective heir of Mahmoud Abbas.

Another Barghouti is Mustafa, the very likable leader of a leftist party, who ran against Abbas for the presidency of the Palestinian Authority. We have met while facing the army in several demonstrations against the Wall.

Omar Barghouti, the leader of the BDS movement, is a postgraduate student at Tel Aviv University. He demands the free return of all Palestinian refugees, equality for Israel’s Palestinian citizens and, of course, an end to the occupation.

However, BDS is not a highly organized worldwide organization. It is more of a trade mark. Groups of students, artists and others spring up spontaneously and join the struggle for Palestinian liberation. Here and there, some real anti-Semites try to join. But for Netanyahu, they are all anti-Semites.

The fatherland is in danger. National unity is the order of the day. “Opposition Leader” Yitzhak Herzog is rushing forward to support Netanyahu, as are almost all other parties.

Israel’s Supreme Court, a frightened shadow of its former self, has already decreed that calling for a boycott of Israel is a crime – including calls for boycotting the settlements.

Almost every day, news about the boycott hits the headlines. The boss of “Orange”, the French communications giant, first joined the boycott, then quickly turned around and is coming to Israel for a pilgrimage of repentance.

Student organizations and professional groups in America and Europe adopt the boycott, but the EU now vigorously demands the marking of settlement products.

Netanyahu is happy. He calls upon world Jewry to take up the fight against this anti-Semitic outrage. The owner of Netanyahu, multi-billionaire casino mogul Sheldon Adelson, has convened a war council of rich Jews in Las Vegas. His counterpart, pro-Labor multi-billionaire Haim Saban has joined him. Even the perpetrators of the Protocols of the Elders of Zion would not believe it.

As comic relief, another casino owner is competing for the headlines. He is a much smaller operator, who cannot be compared to Adelson. He is the new Knesset Member Oren Hazan, No 30 on the Likud election list, the last one who got in.

A TV expose has alleged that he was the owner of a casino in Bulgaria, who supplied prostitutes to his clients and used hard drugs. He has already been chosen as Deputy Speaker of the Knesset. The Speaker has temporarily suspended him from chairing Knesset plenum sessions.

So the two casino owners, the big and the small, dominate the news. Rather bizarre in a country where casinos are forbidden, and where clandestine casino goers are routinely arrested. Well, life is a roulette game — even life in Israel.