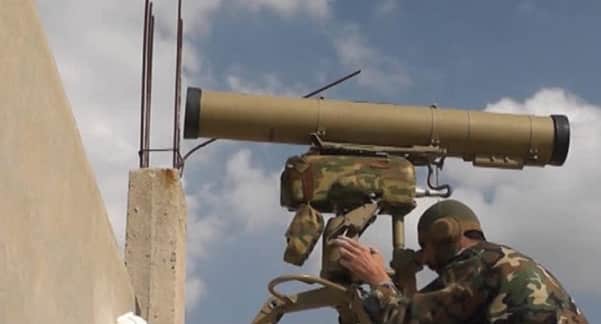 Provinces, SANA- Units of the army and the armed forces on Monday continued to launch wide-scale military operations against the Takfiri terrorist organizations across the country, killing scores of them and destroying their dens and ammunition.

Army units killed a number of terrorists and destroyed their vehicles in the surroundings of al-Tha’leh Airport and in Tal al-Sheikh Hussein in the countryside of the southern Sweida province, according to a military source.

Later, a military source said that the units defending al-Tha’leh Airport destroyed three armored vehicle used by Jabhet al-Nusra terrorists that were moving from the direction of al-Sheikh Husein hill and Khlaif hills.

Other army units destroyed a number of dens of ISIS terrorists in a special operation carried out in the northeastern countryside of the province.

An army unit, based on accurate information, carried out bombardments against dens and positions of the ISIS terrorists at the hills of Ashayheb and in the vicinity of Tal Dalfa, and on the road linking northern Ashayheb and al-Fadeen hills in the northeastern countryside of the province.

The source added that a number of the ISIS terrorists were killed in the bombardments, in addition to destroying one of their machinegun- equipped vehicles and their arms and ammunition.

On Kharba– Jbaib axis in the southwestern countryside of Sweida, a number of terrorists were killed, others were injured and a convoy of vehicles for terrorist organizations was destroyed.

Army units targeted terrorists fleeing from the surroundings of al-Tha’leh Airport towards the southwest, and attacked their hideouts in Um Walad, al-Karak, and al-Hrak in Daraa countryside, killing scores of them.

In the northwestern countryside, an army unit fired intensively on terrorists’ positions in Kafr Nasej town, leaving a number of terrorists killed and their arms and equipment destroyed.

Meanwhile, a unit of army killed a number of terrorists who tried to infiltrate to al-Ghezlan farm in the northern countryside of Daraa and destroyed two vehicles of Jabhat al-Nusra terrorists with all terrorists on board on the dirt road west of Atman town.

In Daraa city, a unit of army destroyed hideouts of Takfiri organizations on al- Sad road, north of al-Abasiyeen bakery and to the east of doctors’ syndicate building and al-Hamadeen neighborhood east the national hospital.

The army carried out several operations against dens of terrorists of Jabhat al-Nusra and the so-called “Ahrar al-Sham Islamic Movement” in the villages of Nabaa al-Sakhr and Bir Ajam in the southern countryside of the southern Quneitra province.

A number of the terrorists were killed in the operations and others were injured and their arms and ammunition were destroyed.

Meanwhile, an army unit destroyed arms and ammunition of Jabhat al-Nusra terrorists and killed scores of them in Abu Shabta village in the northeastern countryside of the province.

In central Syria, an army unit, aided by the popular defense groups, clashed with terrorists, most of them members of Jabhat al-Nusra, in al-Hamra town, 40 km to the northeast of Hama city.

The source told SANA that the army unit foiled the terrorists’ attempt to attack a military post in al-Hamra town, killing 13 of them and destroying their vehicles that were equipped with machineguns.

The bodies of two terrorists nicknamed “Abu Omran” and “Abu al-Zarqawi”, who are identified as leaders of terrorist groups, were among the dead.

Terrorist groups acknowledged on their social media pages that they suffered heavy losses at the army units’ hands. They referred to the killing of a so-called “field leader” within Jabhat al-Nusra who is nicknamed “Abu Batoul al-Tunisi”.

The Army air force killed a number of terrorists and destroyed their vehicles in the area surrounding al-Hamra town, Totah and al-Kastal al-Janoubi in Hama countryside.

An army unit killed many Jabhat al-Nusra terrorists as it targeted their movements in the direction of Um Sharshouh-Tasnim in the northern countryside of Homs province.

The source added that another army unit destroyed a mortar launcher and killed a number of Jabhat al-Nusra terrorists in Hirsh Kafran, 20 km to the north of Homs city.

In the eastern countryside of the province, army units targeted hideouts and positions of ISIS terrorists in Abu Huwadit village and to the north of Sadad town on the outskirts of al-Badia desert, leaving a number of the terrorists killed and their weapons destroyed.

An army unit killed a number of Jabhat al-Nusra terrorists in a special operation that targeted their hideouts in the villages of Hassno and al-Maqrousa in the vicinity of Saasa town in the southwestern countryside of Damascus.

The army units also inflicted heavy losses upon Jabhat al-Nusra terrorist organization in personnel and equipment during operations against its positions in the farms of Khan al-Shih.

A military source said the Army’s Air Force killed scores of terrorists, injured others and destroyed their vehicles in Tal Salmou, al-Baragheti, Maaret Masreen, and Uram al-Jouz in Idleb countryside.