Home World Who set Fire to Malmand town in Sangin; Government or Taliban?

Fazal Mohammad, lame with a hand, covering his head with a Helmandi turban and whose color is turned to black due to several sorrows; lives in Kabul since several months in order for his voice to be heard by the leaders of NUG and/or the heads of security bodies.

He looks disappointed from the every governmental official, and believes in no one that they would provide them with their rights. 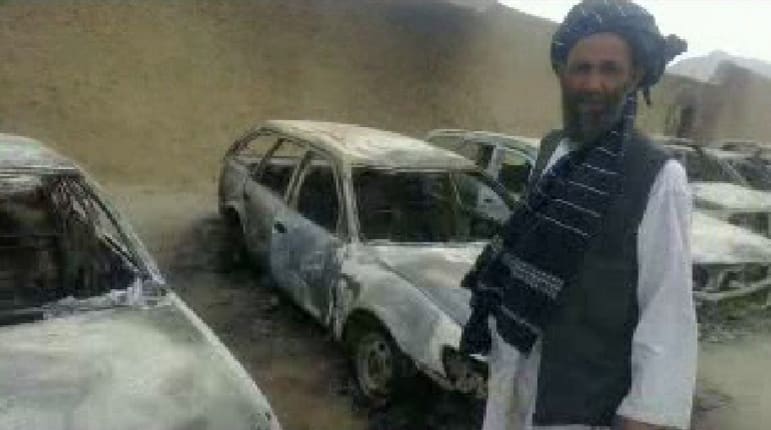 He is complainant of Helmand public media and so the international media that broadcasts in Pashto; he says no one has listened to him. He, for receiving his and his other fellow citizens’ rights, knocked everyone’s door but no one responded.

Fazal Mohammad was given my name by a friend almost a month ago; I spoke with him but he was disappointed, he became disappeared for two weeks, then. On the first day, he said, some journalists had taken interviews from him but they are yet to be broadcasted.

He, might thought of something, called me after two weeks and said that he is completely disappointed and asked me if I could raise the voice of Sangin’s Malmand people with officials.

A lamed-hand Fazal Mohammad was waiting in the door, he showed me the room; he brought a big file full of documents; he had made petitions almost for every related governmental body; he had the photographs of their burned bazaar, also.

He handed me the entire document, and thanks for giving me the video of burned bazaar taken by him.

Fazal Mohammad had retail shop in Malmand bazaar of Sangin district. There is everything in shops located in districts and villages because the shopkeepers try to have everything the villagers might be needy of.

On February 15th of 2015, the Afghan Special Forces put our Malmand bazaar, which has 450 shops, to fire, he said.

When he was asked about the reason for why their shops were burned by them? He said the government should be asked that why they burned the retail shops, workshops and bookstores of ordinary people.

He said that there were shooting far in the area, and then soldiers from the Afghan Special Forces entered our area and took a lot of people in the area hostage, they tortured them and laid them down for 6 hours, they were photographing them, also.

They, together with the hostages, attended the bazaar and put the shops to fire. The local people were watching their shops burning but they could not do anything; Afghan Special Forces were telling the people that you are comrades of the Taliban, that’s why we burn your shops, Taliban buy goods from your shops, if there were not your shops, where Talban would take their goods/tools from?

There are a lot of people that blacken the government; otherwise, no one should do such a cruel and inadmissible act, Fazal Mohammad added.

The entire shops were closed while the bazaar was putting to fire, some of the shopkeepers were being hostage with the Afghan Special Forces and some others were hiding in their homes.

Fazal Mohammad said that the local people hide in their homes when they learn about the Special Forces attending the area, because they arrest the villagers and the local people and make them to walk in front of them in order to become targeted by the mines, if there are mines planted by the Taliban; so, that’s why people hide and do not come out to bazaar.

There was the car seller for the Malmand people, there were 31 cars in there, and the owner of the car seller was sitting there in order for his cars to be not disappeared, stolen. The members of the Afghan Special Forces entered the car seller; however, the owner showed them his work license but they, first, tore out his license and then put his cars to fire. 24 cars were burned. The delegation attended the area confirmed that 19 cars were fully burned and 5 others were somewhat. The Afghan Special Forces told him that whether these cars belong to the Taliban or you sell them to them, so we are putting them to fire.

Fazal Mohammad said that they, first of all, provided the information on Malmanad bazaar to the Governor of Helmand Province, then the Helmand Provincial Council, and after that the Independent Directorate of Local Governance (IDLG) in Kabul, the office of Chief of Army and the members of Meshrano Jirga (the Upper House of the Parliament), but their voice is yet to be heard.

They told Dr. Farid Momandzai, the deputy director of IDLG that if there rights were not given, they would have to raise their voice through civil means by protesting and/or blocking Herat-Kandahar highway.

They, also, hope that they could meet President Ghani through the members of National Security Council (NSC) and/or the Presidential Palace’s (ARG) Directorate of Protocol, but they could not succeed even after passing almost 5 months.

Fortunately, a domestic TV had an interview with Haji Fazal Mohammad in Pashto language about 3 weeks ago, and after broadcasting this interview, it is thought that the Presidential Palace’s (ARG) Directorate of Protocol is ordered to appoint a delegation to review their documents.

Reports on destroying Helmand’s homes and shops are given several times, but neither the international nor the domestic Human Rights’ bodies expressed any reaction regarding this issue.

Recently, reports on civilian casualties caused by ANA cannon balls are given from Ghazni province; reports about the ANA firing on a wedding ceremony in Sangin district of Helmand province were given, also.

Nevertheless, the leaders of NUG are still quiet on civilian casualties, and these are the reasons that cause civilians’ houses and shops to be burned.

Fazal Mohammad handed me the documents on the range below:

February 24th, 2015: The letter from the Provincial Governor to the IDLG.

March 16th, 2015: The Operation Directorate of the Chief of Army sent a letter to the 215 Brigade in Helmand.

March 22nd, 2015: the petition was made to Senator Mohammad Hashim Khan Alokozai, the member of Meshrano Jirga (the Upper House of the Parliament).

Mohammad Hashim Khan Alokozai appointed a delegation on behalf of the Meshano Jirga, the delegation prepared its report and presented to the related bureau.

April 7th, 2015: the letter from IDLG to the National Security Council (NSC) in order to arrange their meeting with the President, send a delegation to the area, and pay indemnity to them.

April 11th, 2015: the second letter from the First Deputy Head of Wolesi Jirga (the Lower House of the Parliament) to the NSC in order for this issue to be reviewed.

April 18th, 2015: the letter from Asadullah Wafa, the Complaints Commissions and the Deputy Director of the HPC to the  Presidential Palace’s (ARG) Directorate of Protocol in order to arrange their meeting with the President.

The Malmand people have the documents prepared by the delegations sent to the area; its indemnity   is estimated as USD 320,000.

As I had promised the hurt civilians of Malmand that I would raise their voice to higher authorities through an article, so I want to have attention of the authorities to the problems/issues of ordinary people through this way.