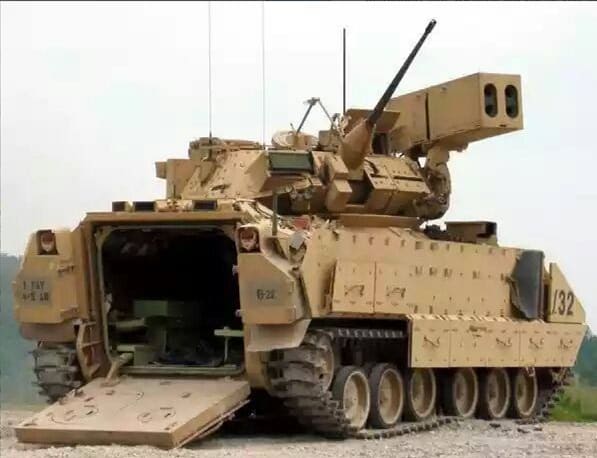 Editor’s note: We have every reason to believe that the photo above is a fake though we were directly contacted by Answer Allah who assures us they used this because it is a better photo than the real one.  I am still shaking my head over that one.  I am unwilling to back them up without a better photo.  Jim Dean wanted the article published anyway, with reservations.  Consider this our “reservations.”

Cities in Syria, Iraq and Yemen are being shelled today.  Protecting those who are killing civilians by the hour and creating a regional humanitarian disaster on a scale bordering on the US invasion of 2003 are American first line weapons, including vehicle mounted TOW and air defense systems and Patriot batteries inside Israeli occupied Syria.  They have shot down Syrian helicopters in the suburbs of Damascus.

The photograph of the M2A3 Bradley Fighting Vehicle was claimed to have been taken yesterday in Yemen.  The vehicle, with the latest TOW missiles and satellite communication systems is serving with al Qaeda forces.

This “system” is one of many serving across the Middle East with terrorist groups, systems not captured from the Iraqi army but rather, as evidence shows, ferried in by C17 and C130 aircraft carefully supervised and protected by American AWAC (Airborne early Warning and Control) aircraft.

Weapons systems like these are being deployed, armed, repaired and resupplied by companies like Raytheon and BAE Systems Land & Armament LP, York, PA, (where this beauty came from) contracted to either the Royal Saudi Army or United States Department of Defense or both.

This is newer and better equipment than most US Army Reserve and National Guard units use, in the hands of enemies of the United States paid for not just by the Saudi Royals, currently warring on Lebanon, Syria, Iraq, Yemen and Iran, but by US taxpayers as well.

The cash that finances these vehicles and the air defense systems that have kept the US air war against ISIS down to a crawl also arms Boko Harum and other groups across Africa.

The same cash, mixed with drug cartel, gambling and prostitution, put Sisi in power in Egypt and funds political opposition parties in Lebanon, Nigeria, Kenya along with ruling parties in Israel, Britain, France and the United States.

Officially, the United States is at war with al Qaeda and legally obligated to destroy this and the dozen more like it.  This isn’t all that al Qaeda has been furnished with, not by far.  This American marvel is connected to an intelligence grid giving it access to satellite and drone based imagery, called “multi-layered ISR. (Intelligence/Surveillance/Reconnaissance.)

Al Qaeda doesn’t have to worry about ambushes or “over the horizon” threats.  They see what America sees, what Israel sees and what Saudi Arabia sees.  All weaponry that goes to the Middle East, whether intended for Saudi Arabia, Israel or even the Gulf States ends up with terrorist organizations and everyone knows about it.

Recent news stories, in attempts to obscure and misinform have taken on a desperate narrative.  Yesterday, in a Bloomberg stories that originated in Israel, Senator John McCain is quoted as attacking President Obama for allowing US troops in Iraq to come in contact with Shiite militias that McCain says were the primary enemy of the US during “the illegal US war of aggression against the people of Iraq.(my quote, not his)”

Please excuse the language properly characterizing the US efforts in Iraq.  America invaded Iraq in order to stop a nuclear program that the US had itself invented through falsified intelligence, facts that cannot be disputed.

As for McCain’s statement, that is a different story.  You see, Saddam was a Baathist, a Sunni, part of a minority that had disenfranchised the Shiite majority that the US invasion put in power but that America seemingly now seeks to overthrow.  Toward that end, America is arming ISIS, aiding others in the same effort, all the while engaged in a “rope-a-dope” pretend bombing campaign.

Fighting the US and the Shiite majority today are Sunni militias, the largest of which is called ISIS, financed and supplied by Saudi Arabia, Israel and the United States.

Why is John McCain, Chairman of the Senate Armed Forces Committee, a direct supporter of al Nusra and ISIS, both terror groups whose leaders he has been photographed with, lying?  It is almost as though he were saying that, during World War II, the US was fighting Russia on behalf of Germany and Japan.

Oddly, McCain’s family, including his father who served as an admiral during the war, did side with both Germany and Japan.  Similarly, it was McCain’s father that in 1967 is responsible for withholding US aid to the stricken USS Liberty when it was attacked by naval and air forces of Israel.

Treason is a long tradition in the McCain family.

Another news story from last week, this one from the Washington Post, cited attempts in congress to cut funding to the CIA’s $5bn program to arm and train al Qaeda forces fighting in Syria and Iraq.

When did the CIA begin working directly with al Qaeda?  Multiple authoritative sources indicate during the 1990s and that at no time has the CIA ever been “at odds” with al Qaeda.  Can someone explain 9/11?

The credibility of the United States itself is in tatters, though perhaps not to the extent “Hanoi John” McCain’s may be, a man long haunted by accusations of aiding the enemy and betraying fellow prisoners of war decades ago.

Another Raytheon shipment of TOW missiles has just reached al Nusra.  It was flown into a US air base in Turkey, loaded on trucks by Turkish intelligence and driven into Syria.  There it keeps the Syrian Army at bay while al Nusra is shelling residential neighborhoods in Aleppo.

The US media describes this shelling as Syrian Air Force “barrel bombs.”

While this goes on, both Syria and Iraq are gathering increasingly large inventories of prisoners, some in Saudi, Turkish and Qatari uniforms, some clearly Israeli.

Even when their photos and names are released, nothing is reported. You just can’t make this stuff up!