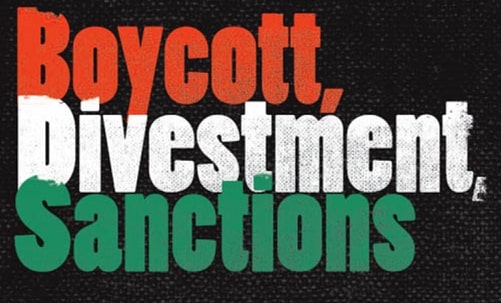 My headline question was provoked by an Uri Avnery article with the headline BDS The New Enemy. After noting that Netanyahu’s whole career has been based on fear mongering and in recent years his promotion of fear of a nuclear-armed Iran, Avnery wrote this:

But. The US, so it seems, is about to reach an agreement with Iran, which will prevent it from achieving the Bomb… What to do?

Looking around, three letters popped up: BDS. They denote Boycott, Divestment and Sanctions, a worldwide campaign to boycott Israel because of its 48 year-old subjugation of the Palestinian people.

Ah, here we have a real threat, worse than the Bomb. A second Holocaust is looming. Brave little Israel facing the entire evil, anti-Semitic world… The legions of anti-Semites are on the march.

Who will save us? Bibi the Great, of course!

Avnery went on to say that instead of isolating the settlements and separating them from mainstream Israelis, a general boycott re-awakens age-old Jewish fears and drives all Israelis into the arms of the settlers.

Netanyahu could not wish for more. He is now riding the wave of Jewish reactions. Every day there are headlines about another success of the boycott movement, and each success is a bonus for Netanyahu.

Netanyahu is happy. He calls upon world Jewry to take up the fight against this anti-Semitic outrage.

Netanyahu has stated that BDS “is anti-Semitic at its core” and his deputy foreign minister, Tzipi Hotovely, has called it “a tactic of diplomatic terrorism” and “an existential threat to Israel.”

A good response to this Zionist propaganda nonsense was contained in a letter from Allan C. Brownfeld of the American Council for Judaism which was published, somewhat to my surprise, by The Washington Post.

Whether one agrees with this (BDS) movement or not, and many Jews are leading participants, the fact is that it is in no way “anti-Semitic.”

Judaism is a religion of universal values. Israel is a sovereign state. It has violated international law by occupying the West Bank and East Jerusalem. The boycott movement is a nonviolent effort to show opposition to this occupation, similar, its advocates argue, to the movement of sanctions against South Africa to show opposition to apartheid. Hatred of Judaism or Jews, which is what constitutes anti-Semitism, appears to be absent from these boycott efforts.

Only by redefining “anti-Semitism” to mean criticism of Israel can such a charge be sustained. Israel’s policies in the occupied territories should be debated on their merits, and defenders of the occupation should not hide behind false charges of “anti-Semitism.”

In my view the statement that defenders of occupation are hiding behind false charges of anti-Semitism is only a pointer to a much greater truth.

IT IS THAT ZIONISM NEEDS ANTI-SEMITISM FOR BLACKMAIL PURPOSES TO PRESERVE ITS IMMUNITY FROM PUNISHMENT FOR ITS DEFIANCE OF INTERNATIONAL LAW AND DENIAL OF JUSTICE FOR THE PALESTINIANS.

Without the explosion of anti-Semitism in Nazi Germany and Nazi-occupied Europe there would have been no Israel because prior to it the majority of the world’s Jews were opposed to Zionism’s enterprise. As I document in detail in my book Zionism: The Real Enemy of the Jews, they knew it was morally wrong; they believed it would lead to unending conflict; and most of all they feared that if Zionism was allowed by the major powers to have its way it would one day provoke anti-Semitism.

What we are witnessing today, provoked by Israel’s defiance of international law and denial of justice for the Palestinians, is a rising, global tide of anti-Israelism which is not anti-Semitism; but it is enough to enable Zionism to assert that it is and put fear of being accused of anti-Semitism into the minds of most Western politicians, the mainstream media and most people in all other walks of public life.

It can be said that the false charge of anti-Semitism is Zionism’s trump card. And that’s why I believe that if Obama (and the P5+1 as a whole) does sign an agreement with Iran, and if it is not sabotaged, Netanyahu will put maximum effort into promoting his assertion that BDS is the new Nazism.

It follows, it seems to me, that the BDS movement must now put maximum, co-ordinated effort into explaining why boycotting and sanctioning Israel is peaceful and legitimate opposition to Israel’s policies and actions and not anti-Semitic. And I think it would be well advised to respond to each and every false charge of anti-Semitism.

The question I frequently debate with myself is this – Can BDS really be a game changer?

In principle I have always been for it but with two reservations.

The first is that a non-governmental BDS campaign will not cause Israel to change course and become serious about peace on terns the Palestinians could accept. What I mean is that for BDS to have a chance of causing Israel to change course, the governments of the American-led Western world and Russia and China would have to endorse and embrace it and put Israel on notice that if it didn’t end its defiance of international law and denial of justice for the Palestinians, it would be isolated and sanctioned by the whole world.

My second reservation is that even if that happened it could be counter-productive. I mean that it could cause the brainwashed majority of Israeli Jews to say, “Here it comes again.” The it being in their minds another great turning against Jews only beginning in Israel. And this would reinforce in brainwashed Jewish minds everywhere Zionism’s assertion that the world has always hated and will always hate Jews and, therefore, that anything and everything necessary must be done to secure Greater Israel as a refuge of last resort for Jews everywhere.

Despite the fact that it could be counter-productive as indicated above, my own view is that the BDS movement as it currently is should now give priority to putting its act together to press the governments of the major powers to put Israel on notice that it will be isolated and sanctioned by the whole world if it does not end its defiance of international law and denial of justice for the Palestinians.

And the essence of an appropriate message from the BDS movement to governments can be simply stated. “You can continue by default to be complicit in Israel’s crimes or you can take all steps necessary to bring the conflict to an end by insisting on justice for the Palestinians and security for all.”

If I was drafting a BDS movement message to governments I would include this.

“If you continue to allow Israel to remain above and beyond the law, you will be responsible for a final Zionist ethnic cleansing of Palestine, an obscenity that could transform the rising, global tide of anti-Israelism into anti-Semitism and guarantee that there will be, at some point, another great turning against Jews everywhere. That is, perhaps, what Zionism really wants in order to justify its policies and actions. But is that what you want as your legacy?”