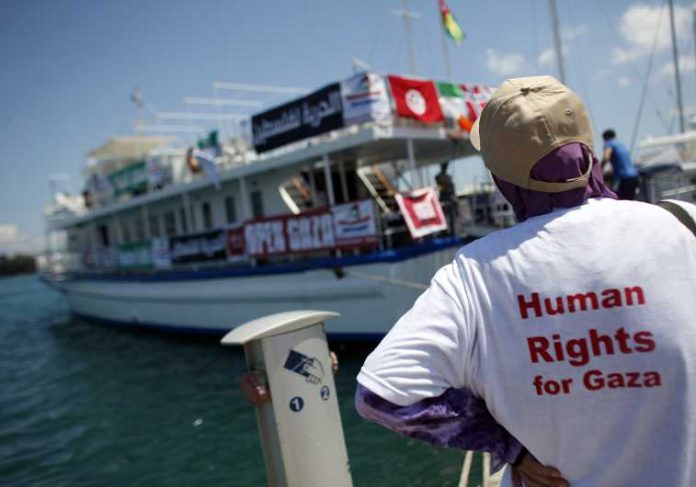 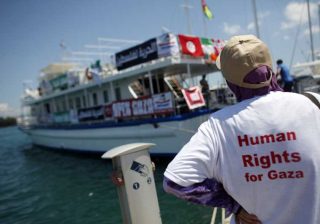 Freedom Flotillas are gathering in the Eastern Mediterranean this week on their way to break the illegal and criminal siege of Gaza. Brave hearts from all over the world are on board. Israel and its supporters are gathering with guns drawn to prevent another attempt to break the siege.

Israel, always the angry, unhappy and psychological misfit nation — full of hate and contempt for the world and human values — is a country that never gives a damn, nor due consideration to international law.

The siege and blockade of Gaza is not only criminal and brutal, it has no basis in international and humanitarian law, and is used by Israel as an excuse for collective punishment of Gaza, its people and leadership. This collective punishment finds sanctions and support from the US and, unfortunately, also in Western Europe.

Ramallah, unlike last time with its vocal contempt of those risking their lives, is mostly silent now — not sure if there is, like last time, clandestine cooperation with Israel to undermine the attempt to break the siege.

For Hamas, this is a welcome effort, especially since its billion dollar tunnel business came to an abrupt end with the military takeover in Egypt and with the Egyptian decision to clear a wide swath of land along the border with Gaza, which evicted and displaced tens of thousands of Egyptian families in the Egyptian Rafah. Unfortunately, the Arabs on their own are lacking the will to force an end to the siege.

This coincides with the announcement in Ramallah that reconstruction of destroyed homes will take place, and with Qatar already implementing its own plans to rebuild certain parts of Gaza. However most, if not all, construction materials are coming from Israel, and for sure with double digit commissions for key figures in Ramallah.

Security is an understandable concern. If Israel’s issue is security, which it is not, there are thousands of methods and arrangements that allow the international community to inspect goods and products and passengers destined for Gaza without risking Israel’s “security” and to make sure there are no arms or weapons smuggled into Gaza.

Such arrangements I proposed in my earlier posting and old website “gazaoperationhope.com”, including the setting up of a staging area in Cyprus under UN, US and NATO, where all goods and shipments destined for Gaza undergo a thorough inspection in Cyprus, and with a naval-protected corridor between Gaza and Cyprus.

A similar staging area under UN auspices can be set up at Gaza Port beyond the reach of Hamas, militant groups and the Palestinian Authority, ensuring the safety and security of people and goods leaving Gaza and coming into Gaza.

These arrangements should go well hand in hand with the post Mubarak/Morsi Egypt and the erratic schedule of opening and closing the Rafah crossing. Let Egypt and Israel build a mile high wall around Gaza, as long as Gazans have complete and unhindered access to the sea. 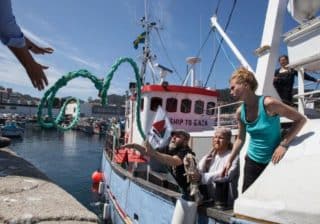 The excuses given by Israel and its supporters within the US make no sense at all, by justifying bullying and hijackings on the high seas — no different from the Somali Pirates in the Indian Ocean — and its shows the moral and political bankruptcy of Israel, with its Zionist agenda and its sponsors in Washington.

Of course, one needs to keep in mind the list of banned items that Israel uses to keep the siege of Gaza going. It banned pasta, ketchup, lentils, and hearing aids. Chocolate items are forbidden to the people of Gaza, since it “poses a risk to Israel’s security” and no one in Washington dared to question such list.

Knowing how Tel-Aviv works, I will not be surprised if Israel continues to insist on making decisions as to what should enter or leave Gaza.

Frankly speaking, who needs Israel and its construction material? Gazans and Palestinian officials will be committing a tactical error by using Israeli materials for the reconstruction of Gaza, because if they do, they will be rewarding Israel for its crimes. No Israeli materials should be used in Gaza, period.

Let Israel keep its borders crossing closed; and let the people of Gaza open their port and airport, and import and export everything they need and want through the Gaza port and airport. No need to reward Israeli suppliers with billions of supply contracts, giving them incentives to destroy Gaza one more time, knowing they will be rewarded with billions worth of supply contracts.

Let the UN and selected countries, including EU and US, open and operate both the Seaport and Airport of Gaza. Time to end this criminal and inhumane siege of the people of Gaza – now and forever.