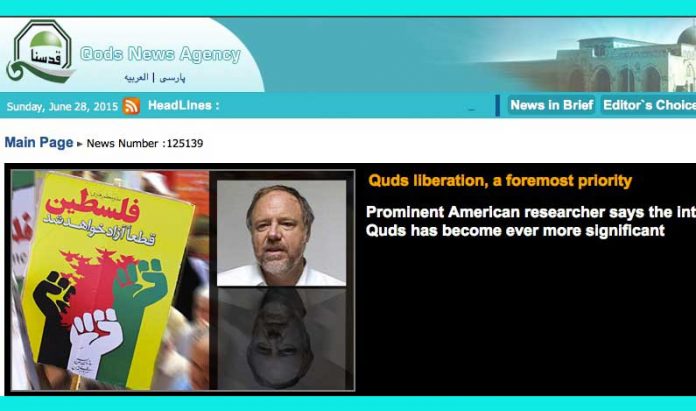 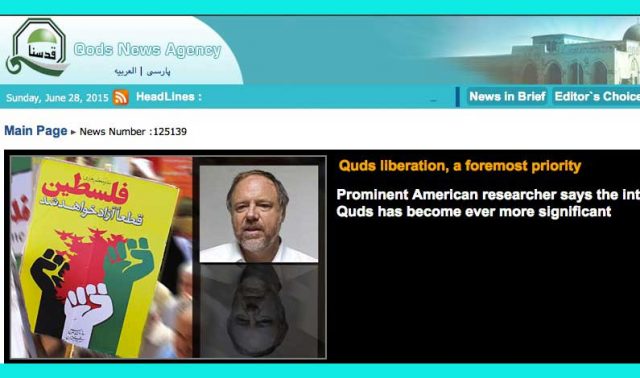 “Al-Quds Day is the last Friday of the Muslim holy month of Ramadan declared by the Iranian late spiritual leader Ayatollah Ruhollah Khomeini as an international day of struggle against Israel and for the liberation of Jerusalem.”  This year it falls on July 10th.

Prominent American researcher, Kevin Barrett says the international day of Quds that falls on July 10 this year has become ever more significant than any other moment since its commencement 37 years ago.

Barrett also told the Qods News Agency (Qodsna) that every Muslim on earth should make the liberation of al-Quds his or her number one priority, adding the cause may brought Muslims internal unity and help them establish a new world order (sic), free from Zionism.

The full text of the interview follows.

Qodsna: How much the International Quds Day has the capacity to become a global cause?

Barrett: International Quds Day is even more important today than when it was first declared in 1979. The liberation of al-Quds from Zionist occupation is the number one challenge facing the Muslim Ummah. As the Zionists have grown more and more reckless and extreme in their criminal behavior, anti-Zionism is spreading around the world. But the world’s Muslims, and especially the governments of Muslim countries (with the exception of Iran) are not leading that movement. Many governments in the Arab world have become criminally complicit in the Zionist occupation of al-Quds. The governments of Egypt and Saudi Arabia, in particular, have failed in spectacular fashion. They are now the close friends and allies of Netanyahu, and share the blame for his crimes against humanity.

There are several reasons why every Muslim on earth should make the liberation of al-Quds his or her number one priority. First, this is the issue that unites the Muslim world. Al-Quds has been an Islamically-administered holy city throughout virtually the entire history of Islam, and symbolizes Islam’s status as God’s final revelation to humanity, encompassing and transcending previous revelations. The Zionist theft of the Holy Land is a criminal act of aggression against every one of the world’s Muslims, and against God.

Secondly, by uniting to expel the Zionists from the Holy Land, Muslims will forge a renewed sense of unity and purpose that will carry over into other areas. The (usurious) riba-based Zionist-dominated international banking system, which seeks to establish a secular/satanic New World Order, will suffer a crushing defeat on the day that al-Quds is liberated; and the Muslim unity forged in that liberation struggle will form the basis for a newly-united Ummah, which will establish a common halaal currency (gold dinar and silver dirham), a free trade zone extending through every Muslim-majority country, and the establishment of more effective institutions for political as well as economic pan-Islamic unity.

Third, the liberation of al-Quds by Muslims will signal the rebirth of Islam as a force for justice in the world, celebrated by non-Muslims as well as Muslims. Zionism and imperialism, twin expressions of the bankster-driven New World Order, are the leading forces of injustice in the world today; they are the current expressions of the worst excesses of European imperialism, which has been perpetrating non-stop genocides worldwide during recent centuries. The liberation of al-Quds will definitively announce the end of that era, and will be welcomed by billions of impoverished and oppressed people all over the world, including in the imperialist nations themselves.

Finally, this is a battle that obviously can be won. There are only a few million committed Zionists in the world, opposed by nearly two billion Muslims.  While we cannot directly defeat the entire West and put an end to its satanic characteristics and behaviors overnight, by splitting the West from the Zionists (an easy task, given the outrageous excesses of the Zionists) we can first defeat the Zionists, which will then naturally lead to the defeat of the worst excesses and most corrupt institutions of the West. If Muslims unite and make this struggle our priority, victory will ensue, God willing.

Qodsna: How do you see the momentum behind the international day?

Barrett: Today we are living through a period of furqan or clear division between the forces of good versus the forces of evil. As governments of the Gulf States and Egypt join the forces of evil, it may appear that International Quds Day, and the liberation struggle it represents, is losing momentum in the countries of the region. But at the larger, global level, anti-Zionism is growing, and along with it the potential for International Quds Day to unite Muslims for the liberation of al-Quds.

Qodsna: How do you think the ISIS issue may have overshadowed the Palestinian issue? Could it demote the unifying role of the international day?

Barrett: ISIS and takfirism in general are part of the Zionist divide-and-conquer strategy against Islam. ISIS obviously is not willing or capable of mounting an effective challenge against the Zionists. Instead, it targets other Muslims and spreads fitna in Muslim lands. Unfortunately, the forces behind ISIS – the Saudi regime, the Zionists, and the bankster empire that rules the USA and Europe – have had some success distracting Muslims with sectarianism. This is unacceptable.

Rather than ISIS overshadowing International Quds Day, it is International Quds Day that should overshadow ISIS. Muslims need to ask themselves: Who is mounting a real challenge against the Zionist enemy? What is the real role of ISIS? Is ISIS really serving as an “Israeli Secret Intelligence Service” dedicated to Balkanizing the Middle East along ethnic and sectarian lines in accordance with the Oded Yinon plan? If so, then the struggle against ISIS is just another facet of the struggle against Zionism that we honor on the last Friday of every Ramadan.