Home Government Putin pledges support for Syria in all fields 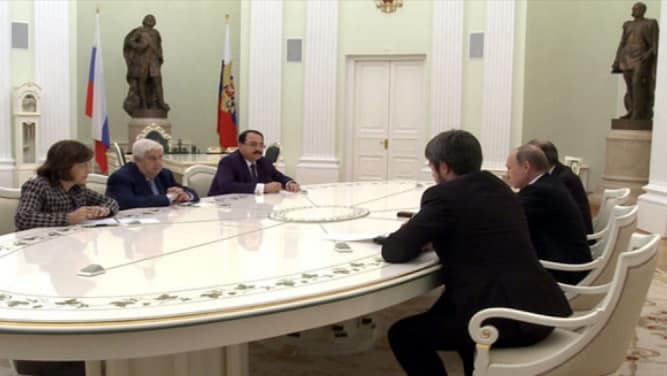 A noticeable leap in the Russian-Syrian relationship:

Assad is piloting the war in Syria, but we have Iranian military experts in the field

On President Putin’s call for a regional coalition to combat terrorism, Moallem’s told Russia Today in an interview aired Tuesday “this needs a miracle”, and that countries, which have been conspiring for more than 4 years against the Syrian people, supported and armed terrorists from 100 states and dispatched them to Syria, need a miracle to change their policies vis-à-vis combatting terrorism although UN resolutions stipulate that those countries must fight terrorism.

“I believe that the move of terrorism from Syria and Iraq into the Gulf States and the explosions that happened in Saudi Arabia, then in Kuwait sounded a very real alarm,” Moallem said.

Answering a question on Assad’s reelection, Moallem said that President al-Assad has popularity, wondering if countries like Saudi Arabia and Jordan conduct any democratic elections.

“The Syria people have supported President al-Assad because he is the safety valve for Syria, and will drive his country to the shore of safety,” Moallem said.

“But to say that there is no calm in Syria or no end to violence except after the departure of President al-Assad , this is a silly stance which won’t indicate a political experience because President al-Assad is not Syria, but he is the protector of Syria,” Moallem added.

On the possibility of Syrian security coordination with those states to face terrorism, Moallem said “As for combating terrorism, we are ready to coordinate with all sides because this phenomenon will affect the security and stability of the neighboring countries and the whole world.”

On whether the latest combats with the militants were to affect the government politically to offer negotiable concessions or not, Moallem said “they planned for that, but we in Syria believe that the political solution is the final one to end the crisis.

Concerning accusations against the Syrian government to exploit the file of minorities in Hasaka and Sweida, al-Moallem affirmed that Sweida families and their support to the Syrian government and army was the thing which protected the city from the crimes of those terrorists; likewise, the people in Hasaka defend their house and land in cooperation with the Syrian army.

On the parliamentary elections in Syria, Moallem added “the elections will be held in the summer of 2016 according to the Syrian constitution regardless of the field situation.

Responding to a question whether President Assad is leading the war or Iran, He said “Assad is the General Chief of Staff of the Syrian armed forces, He is piloting the war, but we have Iranian military experts in the field.