This morning, Russia Today ran an article literally soaked with propaganda.  Normally, when a publication with close ties to the Russian government is accused of propagandizing, it generally involves the loose use of facts in attacks on President Obama or the daily treaty violations in Donbas.

Today, RT changed sides, curiously and, even more colorfully, ran a photograph of an ISIS weapon that ties into their story in a very curious way.  You see, the RT story decries how Israel and Hamas are going to be fighting ISIS together yet in the article, one of the ISIS fighters featured in a Twitter photo has a highly advanced weapons system sourced through an Israeli company operating in Azerbaijan.

Yesterday, VT reported  exclusively on meetings in Moscow between Syrian and Russian officials.  Russia Today not only missed this story but seems somehow quite “out of step.”

First for the story:

Islamic State has issued a stark warning to the Palestinian group Hamas that the Gaza Strip could be next on their list of territories they want to conquer. The jihadist organization has accused Hamas of not enforcing Islamic law stringently enough.

The jihadist group, formerly known as ISIS/ISIL, released a video message that was recorded in Syria and addressed to the “tyrants of Hamas.”

“We will uproot the state of the Jews (Israel) and you and Fatah, and all of the secularists are nothing and you will be overrun by our creeping multitudes,” said a masked Islamic State member, Reuters reported.

“The rule of Sharia (Islamic law) will be implemented in Gaza, in spite of you. We swear that what is happening in the Levant today, and in particular the Yarmouk camp, will happen in Gaza,” he said.

ISIS fighters overran much of the Yarmouk Palestinian refugee camp in April in Damascus, establishing a foothold in the Syrian capital for the first time. Palestinian and Syrian officials have vowed to retake Yarmouk, a built-up area that housed 160,000 Palestinians and Syrians before the civil war. 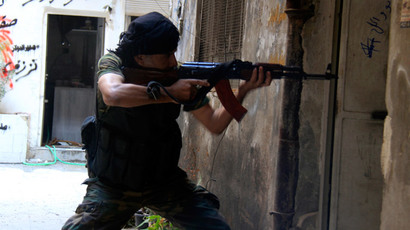 “Because of pressures by the Palestinian factions on Daesh fighters, they were forced to retreat from some posts,” Abdul-Majid said in April, using a derogatory Arabic acronym to refer to ISIS, according to AP.

Hamas, like ISIS, has a deep animosity toward the state of Israel. But unlike the jihadist group, Hamas does not wish to create an Islamic caliphate in the Middle East. Rather, it wants to defend Palestinian interests.

The Palestinian militant group has been accused of having links with ISIS, despite their recent struggles against the jihadist organization that has conquered large areas of Syria and Iraq since the summer of 2014.

Hamas has been accused by Israeli Intelligence Minister Israel Katz of partnering with affiliates of ISIS in Egypt’s Sinai peninsula, a charge that has been long denied by the Palestinian group.

“There is cooperation between them in the realm of weapons smuggling and terrorist attacks. The Egyptians know this, and the Saudis,” Katz told a Tel Aviv conference organized by the Israel Defense journal, Reuters reported.

However, other analysts believe that the challenge posed by ISIS could actually bring Israel and Hamas closer together as they look to try a fight a common enemy. Experts have raised the prospects of a five-year ceasefire deal, which would allow Hamas to open a seaport in the Gaza Strip and end a naval blockade imposed by Israel. 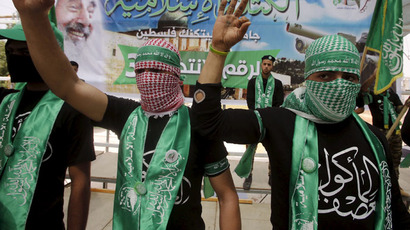 “It is not the first time that Hamas is sending the message that it would like to discuss a Hudna (long-term truce) with Israel,” said Haim Tomer, former head of overseas operations at Israel’s Mossad intelligence agency, told Reuters.

“(Hamas) is a movement that has become a regime and when you are a regime you can suffer as a result of your grip on power. This is what they are now learning. So they are looking for options,” he said.

A Hamas spokesman, Sami Abu Zuhri, said the group had received “ideas” but no concrete proposal, regarding the possible ceasefire.

“We will deal with any effort that would lead to breaking the blockade and alleviate the suffering of Gaza people on condition it does not affect our national cause.”

Three separate rocket attacks launched from the Gaza Strip into Israel in June were the work of the Salafist group, the Omar Brigades, which has pledged its loyalty to ISIS. Hamas denied taking any part in these strikes.

Israel responded with airstrikes, but they deliberately targeted buildings and facilities that Hamas no longer used, so as to not inflame the situation.

Let’s talk about this story a bit.  Veterans Today publishes, on a regular basis, suppressed news on the war against the Islamic State.   The linked article ( http://www.veteranstoday.com/2015/07/01/suppressed-war-news-july-1-2015/) features reports on 24 hours of news from Syria and Iraq that has been censored, not just in the west, but as you can see also, from Russia Today.  The problem here, of course, is that Russia is closely aligned with Syria and is offering military support to Iraq as well but the reporting in Russia Today is running, not just the other way, but is shamefully false, despicably so.

Syria is not losing the war as RT decries continually but, with help from Hezbollah, Russia and Syria, ISIS and al Nusra are being pushed back on all fronts with high losses.  When there is an ISIS gain, RT runs that but when Syria kicks them back out, RT is silent.

Moreover, RT’s reporting on the Yarmouk Camp, 35 miles south of Damascus, says nothing about the supply lines from Israel through Jordan nor a word about the Saudi and CIA command centers inside Jordan that manage ISIS operations in Southern Syria.

Despite quite empty rhetoric to the contrary, ISIS has never struck Israel nor killed a single Jew.  Israel openly admits to providing medical care inside Israel to ISIS fighters wounded while fighting Syrian, Kurdish and Iraqi forces.  What is not mentioned is how these personnel are transferred by plane up to 600 miles to hospitals inside Israel and how this clandestine air transport system flew supply runs day and night to ISIS forces who took Ramadi in May.

This brings us down to the Twitter photograph of an ISIS fighter featured in RT:

Here is another view of the weapon above taken from Veterans Today:

And this is the “custom grip” on the ISIS version: 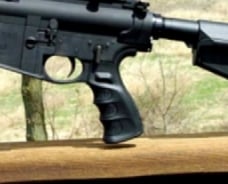 Now for the back story.  The weapon the ISIS jihadist is carrying was built from a VT design.  This is a special purpose weapon, in .300 “Blackout,” a limited production cartridge originally designed for use by special operations forces, one VT has worked with extensively.  The scope on the ISIS weapon is a 32mm 1-6x with bullet drop compensator, a relatively rare product sold by VT but sourced from a Chinese manufacturer who builds these for the US Department of Defense.  This is a restricted export product.

The weapon itself has a 10 inch barrel and a low profile quad rail manufactured in the US.  Here is what is particularly strange.  VT sells these weapons to civilian users with the same flash can shown, a barrel extension that magnifies sound and muzzle flash, something no combat weapon should have.  Combat versions offer silencers or flash hider/muzzle compensators instead.  This is a copy of a VT civilian design, not the military versions.

Back in 2014, an Israeli company came to the US looking for semi-automatic sniper systems in the AR platform and in NATO 7.62×51 caliber.  These are limited production and very devastating weapons.  VT is a prime designer of these systems.  The Israeli company flew a firm VT has worked with and shared technical workups with, limited production weapons design people are a social lot and share parts, “work arounds” and other information regularly, to Azerbaijan to set up a production facility.

The weapon above came from that facility.  This is a 4 pound, 19 inch long weapon that fires a 123 grain bullet accurately up to 400 meters with a muzzle velocity of 2350 fps.  At 300 meters it can put 10 rounds in 10 seconds onto a 12 inch bulls eye.  An AK47 is a child’s toy in comparison.  This weapon has no recoil, no muzzle rise and can carry up to 100 round magazines. (Seen with IDF issue 30 round magazine)

Were VT to have offered these weapons to Syria, there would have been arrests and long prison sentences.  If the ACOG (Advanced Combat Optical Gunsight) scope alone was sold without export license, only available to Israel, it would be prison again, violating not only export licenses but terrorism as well.

Weapons like this and other VT designs never intended for global arms smuggling are a game changer.  The 7.62×51 NATO version with 18 inch barrel can put accurate high rate fire on a target 800 meters away compared to the Russian Dragunov or other AK and RPD variants which are pure “spray and pray.”  If ISIS has this weapon, it has the other designs as well.

Russia Today seems to be totally at odds with Russia’s foreign policy, not just in its misrepresentations of conditions “on the ground” in Syria, parroting Israeli propaganda, but in purposefully misconstruing relations between Hamas and Israel and Israel and ISIS.  They have everything backwards, contradicting most of even their own reporting.

Then again, we have the “small world” issue, weapons that should not exist showing up with terrorist groups.  This time we know exactly where they came from, where every single part came from.