Home Life Greece Says OXI (NO) To The Troika 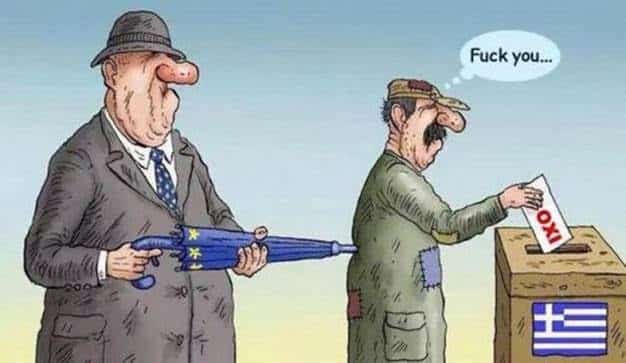 The no vote by Greece is an extraordinary act of political courage, defying threats and intimidation from the European Union, the US government and the Greek ruling class and sends an alarming signal to the global elite that the game has dramatically changed. The “no” vote itself has made clear the social chasm separating the working class from the ruling elites of Greece, Europe and America and sets the stage for needed social change but it won’t be easy escaping our Black Hole of debt: Allen L Roland, PhD

“Since the troika austerity measures began in 2010, the Greek economy has shrunk by a quarter, unemployment has skyrocketed to 25 percent, and because most of the money it’s been lent has gone straight back to the banksters, Greece is still more than $271 billion in debt. Whatever way you look at it, austerity has been a complete and utter disaster, and Greece’s Syriza-led government is completely justified in opposing more cuts, even if doing so might force Greece to abandon the Euro”: Thom Hartman

Is chaos looming for the European Union and eventually the United States and does Goldman Sacks have its incriminating greedy fingerprints over this matter ? The answer is YES and here are the details.

According to investigative reports that appeared in Der Spiegel, The New York Times, BBC, and Bloomberg News from 2010 through 2012, Blankfein, now Goldman Sachs CEO, Cohn, now President and COO, and Loudiadis, a Managing Director, all played a role in structuring complex derivative deals with Greece which accomplished two things: they allowed Greece to hide the true extent of its debt and they ended up almost doubling the amount of debt Greece owed under the dubious derivative deals ~ according to Pam Martens and Russ Martens / Wall Street On Parade

“On the day the 2001 deal was struck, the government owed the bank about 600 million euros ($793 million) more than the 2.8 billion euros it borrowed, said Spyros Papanicolaou, who took over the country’s debt-management agency in 2005. By then, the price of the transaction, a derivative that disguised the loan and that Goldman Sachs persuaded Greece not to test with competitors, had almost doubled to 5.1 billion euros, he said…

“A gain of 600 million euros represents about 12 percent of the $6.35 billion in revenue Goldman Sachs reported for trading and principal investments in 2001, a business segment that includes the bank’s fixed-income, currencies and commodities division, which arranged the trade and posted record sales that year. The unit, then run by Lloyd C. Blankfein, 57, now the New York-based bank’s chairman and chief executive officer, also went on to post record quarterly revenue the following year…

“The revised deal proposed by the bank and executed in 2002, was to base repayments on what was then a new kind of derivative ~ an inflation swap linked to the euro-area harmonized index of consumer prices…

“That didn’t work out well for Greece either. Bond yields fell, pushing the government’s losses to 5.1 billion euros, according to an analysis commissioned by Papanicolaou. It was ‘a very bad bet,’ he said in an interview.”

The deal was restructured again in 2005 according to the Bloomberg article, this time locking in the 5.1 billion euro debt.

For the unschooled to the ways of Wall Street, one might jump to the conclusion that Greece and its finance officials were knowing participants in the deal. That would be a reasonable assumption were it not for counties and cities and school districts across America that were similarly fleeced and hoodwinked by investment banksters on Wall Street especially Goldman.     See article ~ 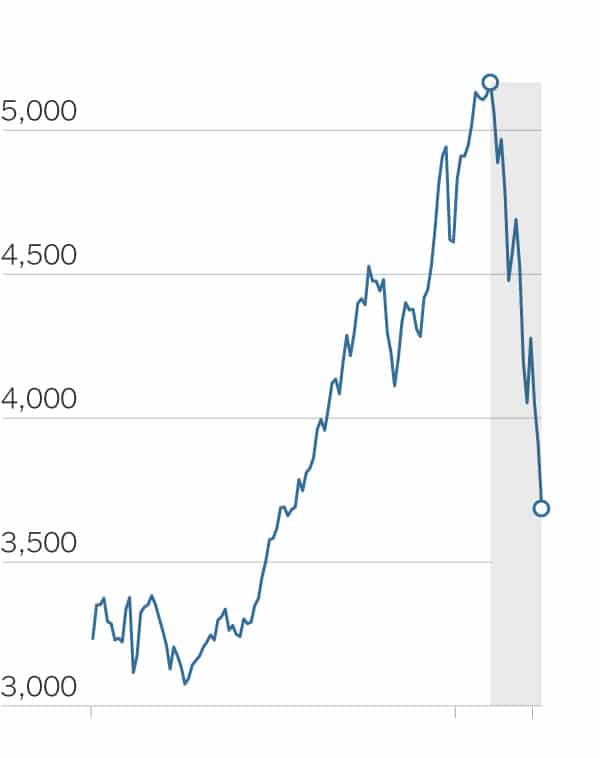 Meanwhile, Since mid-June, Chinese stocks experienced their biggest three-week decline (-29%) since 1992 ~  and fueled by skeptical investors have so far shrugged off each step the government has taken to keep share prices aloft: an interest-rate cut, threats to punish rumormongers, allowing the national pension fund to buy stocks and even plans to investigate short-sellers who have placed bets that the market will fall.

With all this growing global financial uncertainty I usually turn to Max Keiser (RT) to bring some plain talk and levity to the growing possibility of a worldwide liquidity crisis greater than 2008.

RT:Is it time to run for cover in Europe, or would a Grexit not so horrendous? Where is it going to go?

Max Keiser: I’ve been watching the stock price of Deutsche Bank today, Germany’s largest bank, one of the largest banks in the world, certainly with the biggest derivatives book in the world. They are the counter party to the Greek debt. And their stock got hammered. Deutsche Bank could go the way of Lehman Brothers or Bear Stearns, which would set off a global liquidity crisis that would make 2008 look tame by comparison. Look, the thing about Greece is that the Syriza government has said all along that “we have no money, and we’re not going to pay this debt.” And now, Jean-Claude Juncker has woken up to the fact of what he has been told now for a year.

Remember Jean-Claude Juncker is the guy that said not long ago that “when the going gets tough, you have to lie.” So anything that comes out of his mouth, we have to assume that he is lying, because certainly the going has started to get tough

RT: How tough is it going to get? What’s actually going to happen by your best estimation?

MK: As I’ve been saying all along, Greece should grexit and now it looks like they will grexit, which is fantastic for Greece, they will get to restart their economy. It’s terrible for their counter parties, it’s terrible for the Eurozone, and of course Italy and Spain are probably the next countries that will come under the same kind of stress that we’re seeing in Greece right now.

RT: If it chose bankruptcy, would Greece walk free from all of its debt or will it be pursued in the future by the rest of Europe?

MK: They can be pursued all they want, but it’s a global economy, it’s global competition, and Greece has the right to compete in global competition and not have a colonization of their economy by Germany, the ECB, the IMF – the Troika. They have the right to be a free people. The Troika, unfortunately, overplayed their hand, now they must suffer the consequences. Greece will be fine, but I can’t say the same about the Eurozone. I think now they’ve lit a fuse to total destruction of the euro and the banks. In particular Deutsche Bank is the most exposed. This is a hundred trillion dollar derivatives book that could go the way of Lehman Brothers. That’s an enormous shellacking to the global economy, and I think now we’ve got to raise the odds of this happening above 50 percent.

We are staring over the edge of a Black Hole of worldwide debt and this is what it looks like ~ according to Dmitry Orlov of TRANSCEND Media Service;

“The way the black hole sucks in entire countries is as follows. If the black hole doesn’t have enough to suck in for a period of time, it gets hungry and makes the financial markets go into free-fall. The financial instruments of countries that happen to be farther away from the black hole ~ out on the periphery ~ fall faster. In search of a “safe haven,” money floods out of these countries and into the “core” countries that are clustered tightly around the black hole ~ the US, Germany, Japan and a few others. The black hole gobbles up this money, but is then hungry for more. But since the periphery countries are now financially too weak to resist, they can easily be turned into black hole fodder. This is done by saddling the country with a foreign debt it can never repay, then forcing it to keep making payments against this debt by making it a condition for maintaining a financial lifeline ~ keeping the banks open, the ATMs stocked, the lights on and so on. To be able to make the payments, the country is forced to dismantle its society and economy through the imposition of austerity, to privatize everything in sight turning it into collateral for more loans, and to surrender its sovereignty to some transnational organizations, such as the IMF and the ECB, which are directly involved in the care and feeding of the black hole.”  See article ~

Perhaps Ron Paul’s warnings of an impending financial crisis are true  for It appears the day of financial reckoning is rapidly approaching and 2008 may have just been a prelude when you consider the ramifications of a hundred trillion dollar derivatives book going bust. So Greece saying no to the Troika may well have opened up Pandora’s Box ~ and we may all soon be feeling the effects of this Greek tragedy.