Home Government Nasrallah: Syria will remain steadfast, and no-one can bring it down militarily 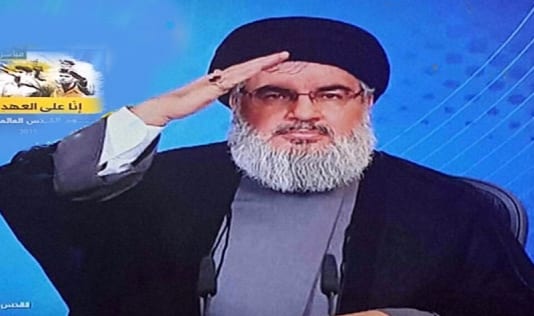 Beirut, SANA – Secretary General of Lebanon’s Hezbollah, Sayyed Hassan Nasrallah, reaffirmed the need to find a political solution for the crisis in Syria, saying that the states that are causing trouble in Syria must cease doing so.

In a speech delivered on Friday on occasion of Quds Day, Nasrallah said that if Syria is lost, then Palestine will be lost as well, and that what is happening in Syria and the Takfiri plot both serve Israel, noting that Israeli leaders have recently expressed satisfaction over the war, destruction, and fighting taking place in Syria.

Nasrallah said that the states that are funding, arming, and smuggling gunmen into Syria and that employ media to instigate conflict and prevent Syrians from holding dialogue must cease these actions which “stoke the fire” in it, stressing the need for Syria to recover its strength and position.

“Some still insist on continuing the erroneous adventure, and in their mind they are anticipating Syria’s fall. These same delusions have been there since five years ago,” he said, noting that the situation of the ground is shifting and now the Syrian Arab Army and popular forces are gaining the upper hand in several areas.

“To those who want to bring down Syria using military means, I say to you that Syria will not fall and that you will have to wage a very long war which will not realize your goals,” Nasrallah added, asserting that Syria will remain steadfast and resilient along with all those who stood alongside it.

He asserted that Hezbollah supports just popular demands in Syria and reforms and political solutions. However, Hezbollah is against destroying Syria and its state, army and against having Takfiri group seize control of it.

Nasrallah also voiced surprise over Israel’s audacity in calling for an “Israeli-Arab alliance against terrorism” while Israel supports Jabhat al-Nusra and other armed Takfiri groups, asserting that Israel is responsible for the rise of terrorism in the region and is itself responsible for heinous war crimes, including crimes committed in Gaza only a year ago.

On the subject of Gaza, Nasrallah said that if only a small fraction of the billions of dollars spent on the wars on Syria, Yemen, and Iraq and on repressing people had been spent to help the people of Gaza, then the situation there would have become bearable, but instead the people of Gaza are abandoned.

He also called for ending the Saudi-American aggression on Yemen, and denounced the bombings that took place in Saudi Arabia recently.

Regarding the situation in Lebanon, Nasrallah said that electing a president must remain a priority, and all sides must reach agreement on finding a way to keep the government functioning, asserting that Hezbollah will never abandon any of its political allies in Lebanon.