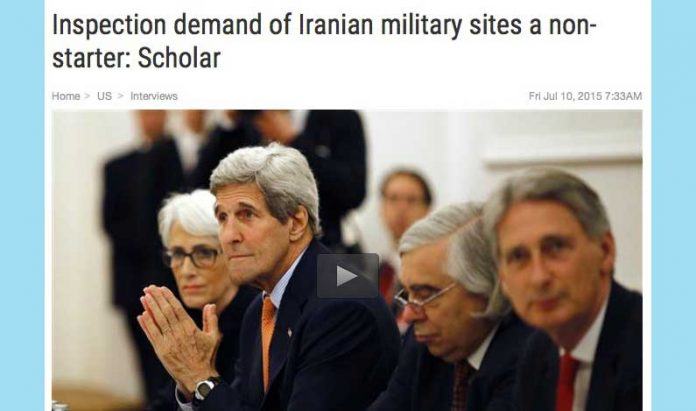 
As of late Sunday night, it looks like the Iran-P5+1 talks could clinch a deal on Monday. Quel auspicious date! An Iranian friend, Mohammad Saleh, emailed me with the following message:

If Iran deal is submitted to Congress Monday, the 60 day deadline to vote it down will be… September 11.


What a slap in the faces of the neocon 9/11 perps that would be!

The neocons are fanatically opposed to any deal with Iran. They want war, war, and more war. The whole point of blowing up the World Trade Center and bombing the Pentagon, as far as they are concerned, was to take out “seven countries in five years” – and Iran, number seven on the list, was the most important target.

Are the realist forces behind Obama sending Bibi a not-so-subtle message? “The Iran deal had better get approved by September 11th…or we just might pin 9/11 on you creeps and turn Tel Aviv into a glass parking lot.”

The previous Iran talks “deadline” was last Friday, July 10th. That “just happened” to be al-Quds Day: The Iran-sponsored international day of protest demanding the complete liberation of Palestine. That, too, could be interpreted as an “existential threat” aimed at the neocon Zionist lunatics behind 9/11. The neocon press was screaming bloody murder:

Coincidence? I don’t think so. I think the realists are telling Bibi that the jig is up.

To get this deal, the P5+1 had to back off from its proposed “on-demand inspections” of any and all Iranian military sites – an obvious non-starter, as I told Press TV: 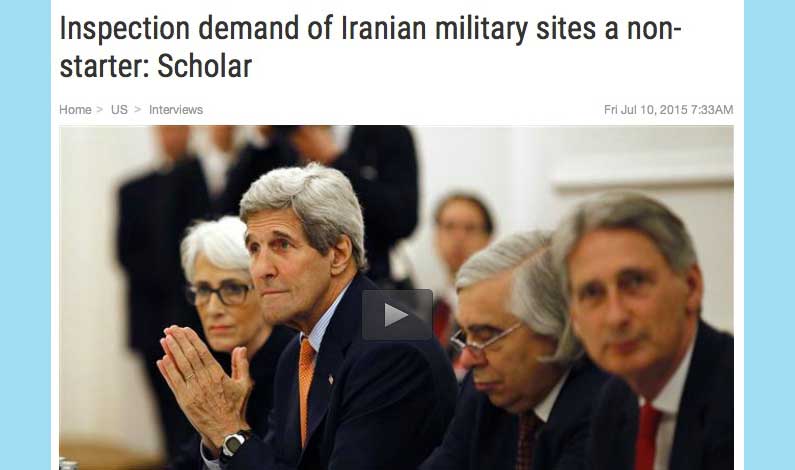 Washington and its allies’ demand of intrusive inspections of Iran’s military facilities is a non-starter in the P5+1 nuclear talks, an American scholar and journalist in Wisconsin says.

“It seems that the Obama administration and its allies in the P5+1 talks are holding up obstacles at the very last moment to the nuclear deal with Iran and especially this issue of inspections;  they are demanding extremely intrusive inspections,” said Dr. Kevin Barrett, a founding member of the Muslim-Jewish-Christian Alliance.

“I am not sure what the details are at this moment, but earlier this week they were talking about demanding sort of on-demand inspections of Iran’s military facilities, and of course, this is a non-starter, because the US has repeatedly threatened Iran militarily, saying nothing is off the table,” he told Press TV on Friday.

Iran and the P5+1 countries – the United States, Britain, France, Russia, China and Germany – have been engaged in crucial talks in Vienna towards reaching a landmark agreement over Tehran’s nuclear program.

The negotiating sides missed an initial deadline of June 30 and all parties agreed on a new July 7 deadline. Now it seems that negotiations will continue at least until Monday.

Dr. Barrett said that “the Israelis who have tremendous power in the US have been pushing for war with Iran ever since 9/11.”

“So there is a clear-cut case of Western and especially Zionist aggression against Iran. They have been planning a war on Iran for several decades really, ever since the revolution of 1979. And in that context, demanding this kind of intrusive inspections of Iran’s military facilities is completely absurd, because these inspections are in fact espionage operations,” he added.

“This was explained by Scott Ritter in regards to the inspections in Iraq prior to the war that utterly destroyed that country. And clearly, they might be planning to do the same thing in Iran.  The Iranian government would be completely crazy to allow on-demand inspections of its military facilities,” the scholar noted.

“So when they appear to be raising that as an absolute, necessary part of the deal, it makes one wonder whether they really want a deal or not, or whether that might be some kind of pressure point they are using to get something else. But one has to ask oneself what else do they want? The CIA and Israeli intelligence actually certified that Iran does not have a nuclear weapons program,” he pointed out.

“Even the Israelis admit that their only concern is that, sometime after this deal would expire ten years from now, they worry about what might happen then. Well, this is completely ridiculous, especially given that the Israelis have 400 plus nuclear weapons, and the Americans have many, many thousands of nuclear weapons, as do many other countries around the world, whereas Iran is the only country in the world whose Supreme Leader has issued a fatwa completely banning all nuclear weapons, reiterating a ban imposed by the father of the Islamic Republic, Ayatollah Khomeini,” Dr. Barrett underlined.

US Secretary of State John Kerry told reporters in Vienna on Thursday that “we are not going to sit at the negotiating table forever.”

“Let me assure you we would not be here continuing to negotiate for the sake of negotiating,” he said. “We know that difficult decisions don’t become easier over time.”

The top US diplomat said that the US and its negotiating partners are “prepared to call an end to this” if “tough decisions don’t get made.”

During a meeting with a group of Democratic senators on Wednesday, President Barack Obama said the chances of a deal with Iran were less than 50-50 at this point, according to one of the senators present at the meeting.