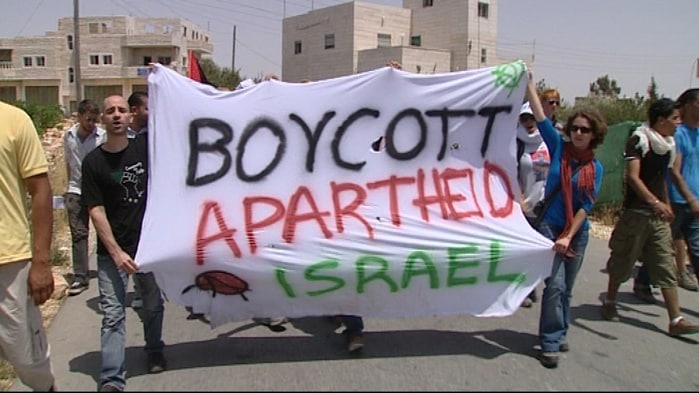 The BDS movement, the Associated Press has recently admitted,

“appears to be gaining momentum — so much so that Israel has identified it as a strategic threat on a par with Palestinian militant groups and the Iranian nuclear program.

“While Israel says the movement is rooted in anti-Semitism, its decentralized organization and language calling for universal human rights have proven difficult to counter, resulting in a string of recent victories that have alarmed Israeli leaders.”

“Israel seems as terrified by the ‘exponential’ growth of the Palestinian-led Boycott, Divestment and Sanctions (or B.D.S.) movement as it is by Iran’s rising clout in the region. Last June, Prime Minister Benjamin Netanyahu effectively declared B.D.S. a strategic threat. Calling it the ‘delegitimization’ movement, he assigned the overall responsibility for fighting it to his Strategic Affairs Ministry.”[1]

Omar Barghouti, one of the group’s co-founders, said:

“We are now beginning to harvest the fruits of 10 years of strategic, morally consistent and undeniably effective BDS campaigning. BDS is winning the battles for hearts and minds across the world, despite Israel’s still hegemonic influence among governments in the U.S. and Europe.”

This is certainly in line with much of what we have been saying for the past two years. The Israeli regime, though powerful, is not undefeatable or unchallenged. The BDS movement has gained momentum precisely because the movement realized that one cannot defeat an immoral and apartheid state with immoral principles. Barghouti specifically talks about “moral responsibility and the struggle against colonial oppression” in his book BDS: The Global Struggle for Palestinian Rights. Once the movement began to use the moral law, which is consistent with practical reason, virtually everyone is now seeing the regime’s true color. The BDS movement

“has grown into a global network of thousands of volunteers lobbying corporations, artists and academic institutions to sever ties with Israel. Its members include campus activists, church groups and even liberal American Jews disillusioned by Israeli policies.”

Fear is certainly beginning to get a grip of the regime because boycotting Israel would cost the Dreadful Few in Israel billions of dollars.[2] And that’s a good thing:

“Most worrying for Israel, some of the group’s core positions toward products made in West Bank settlements are starting to be embraced by European governments. Although the EU says it opposes boycotts of Israel, it is exploring guidelines for labeling settlement products, which many in Israel fear could be a precursor to a full-fledged ban…

“At a time when peace efforts are frozen and show no sign of getting back on track under a new hard-line government, Israelis fear such sentiment will increase.”

The regime certainly cannot abide by practical reason and moral principles, therefore its proponents resort to ridiculous arguments. What is their response to the legitimate movement?

“Israeli leaders consider the movement to be the latest in a history of antagonists out to destroy the Jewish people.”

Both Republican donor Sheldon Adelson and Democrat supporter Haim Saban have recently become “the odd couple.” Why? They want to vaporize the BDS movement. Michelle Kraus writes in the Huffington Post:

“Strange bedfellows (Sheldon Adelson and Haim Saban) are dancing together to combat the BDS movement on America’s college campuses. Hallelujah!”[3]

Kraus, however, ridiculously declares that the BDS movement is anti-Semitic. “One of its most insidious efforts,” she preposterously asserts, is

“to bring anti-Semitism to best and brightest of this generation in America. Students are being badgered across campuses—particularly on the West Coast at the UC system, and the esteemed Stanford University. What should have been a simple and civil dialogue about sanctions has blossomed into full battle fueling the flames of anti-Semitism across the country.

“Yes, students are really being challenged, belittled and bullied for their beliefs. It is bad, very bad and dangerous given the machinations underway in Western Europe. In fact, this could incite bubbling prejudice to all diversity groups, not just Jewish students.”[4]

Fear has already gotten the best of Kraus, who is obviously out of touch with reality here. Is it anti-Semitic to say that Gaza is actually what George Galloway has called “the biggest concentration camp in the world”?

“And for all I knew about the Israel-Palestine crisis, I was not prepared to come in to such intimate contact with so much human destruction. And to really come to grips with the fact that the Gaza Strip is an open-air prison, and it’s not hyperbolic to say so. We’re not just saying this for rhetorical effect.

“In order to enter Gaza, you pass through the Erez terminal with your government press office credential, which means you’re one of very few people who can get in or get out. And you wander down a long corridor, which is a cage, and then you arrive at a metal door at a concrete wall. The metal door opens, it shuts behind you, and you’re inside what is effectively a walled-off ghetto.

“You look down this endless wall, to your right, and you see a remote-controlled machine gun perched on the wall. That’s the spot and strike system, which is operated by an all-female unit of Israeli soldiers in the Negev Desert, tens of kilometers away, by remote. And what they do is, they watch the buffer zone?

“This 300-kilometer area that Palestinians are forbidden from entering inside the Gaza Strip. And anyone who enters who they determine to be a ‘terrorist,’ they eliminate with the push of a joystick button from a remote-controlled machine gun. It’s just that dystopian.” 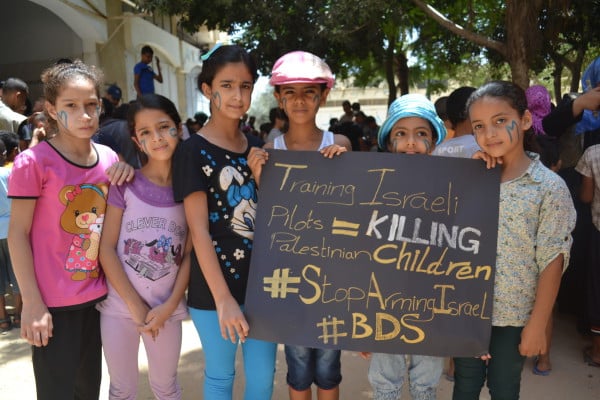 The Zionist plot thickens. What we are implicitly seeing here is that reason, basic human rights, and political order are “antagonists” which seek to “destroy the Jewish people.” The BDS movement hasn’t advocated guns and bullets or even violence. On the contrary, they made it very clear that they are seeking basic human rights. Netanyahu, however, thought differently. He lamented,

“We are in the midst of a great struggle being waged against the state of Israel, an international campaign to blacken its name.”

“B.D.S. doesn’t pose an existential threat to Israel; it poses a serious challenge to Israel’s system of oppression of the Palestinian people, which is the root cause of its growing worldwide isolation.”[6]

You just can’t create a concentration camp in Gaza and expect everyone to love you. It ain’t gonna happen.

You just can’t continue to manipulate U.S. foreign policy and expect that the vast majority of Americans, including this writer, to support you. You can’t continue to create a complete mess in the Middle East, send the six-trillion dollar bill to the American people,[7] torture people around much of the globe, mesmerize puppets and whores like Tony Blair[8] and Mike Huckabee and Jeb Bush (who is now amassing millions of dollars from speeches[9]), and expect everyone to nod their heads in agreement.

At this present moment, Thomas Friedman of the New York Times is mad precisely because the regime may not be able to wage a frontal war against Iran. Friedman lamented,

“When you signal to the guy on the other side of the table that you’re not willing to either blow him up or blow him off — to get up and walk away — you reduce yourself to just an equal and get the best bad deal nonviolence can buy.”[10]

Is this man that blind? Is Iran really an existential threat? Or is Friedman using Trotskyism which continues to find its way in places like Iraq?

If there is an existential threat in the Middle East and much of the world, it is none other than the Zionist regime in Israel. Let us hear from Paul R. Pillar, 28-year veteran of the CIA and a professor at Georgetown University:

“[T]he Israeli arsenal is so potent it is the only one that poses an existential threat to any other country in the region.”[11]

If you think that Pillar is just pulling your leg here, then it is pertinent to bring in military historian and prolific writer Martin van Cleveld, who said unapologetically:

“We possess several hundred atomic warheads and rockets and can launch them at targets in all directions, perhaps even at Rome. Most European capitals are targets for our air force…. We have the capability to take the world down with us. And I can assure you that that will happen before Israel goes under.”[12]

So, when Friedman starts talking about the so-called Iranian threat, you can safely say that someone needs to douse him with a bucket of water.

“After beginning the negotiations by insisting that the Tehran regime relinquish all its suspect enrichment facilities and cease all its nuclear activities relevant to making a bomb, the Obama administration has ended by permitting Iran to keep virtually all of those facilities and continue some of those activities.”[13]

I few weeks ago, I met a man who went to Johns Hopkins and who studied under Mandelbaum. As we began to talk about the worldviews that post beneath the U.S. foreign policy, he remembered that Mandelbaum was implicitly proposing some kind of Zionist ideology in the Middle East. (In fact, Friedman co-authored a book with Mandelbaum.) At the end of our conversation, he asked me, “What do you think is going to happen in the end?”

I told him that irrationality, immorality, and inconsistency are infallible signs that the regime is failing. The regime is indeed powerful, but we are the majority. So, the regime will continue to crumble precisely because representatives of the regime continue to undermine their own mines by violating the moral law and order. This actually goes to the heart of what G. K. Chesterton said:

“For all denunciation implies a moral doctrine of some kind; and the modern revolutionist doubts not only the institution he denounces, but the doctrine by which he denounces it…As a politician, he will cry out that war is a waste of life, and then, as a philosopher, that all life is a waste of time.

“A Russian pessimist will denounce a policeman for killing a peasant, and then prove by the highest philosophical principles that the peasant ought to have killed himself. A man denounces marriage as a lie, and then denounces aristocratic profligates for treating it as a lie. He calls a flag a bauble, and then blames the oppressors of Poland or Ireland because they take away that bauble.

“The man of this school goes first to a political meeting, where he complains that savages are treated as if they were beasts; then he takes his hat and umbrella and goes to a scientific meeting, where he proves that they practically are beasts. In short, the modern revolutionist, being an infinite skeptic, is always engaged in undermining his own mines.

[8] For a recent report on this guy, see Glenn Greenwald, “Tony Blair and the Self-Exalting Mindset of the West: In Two Paragraphs,” The Intercept, July 9, 2015.