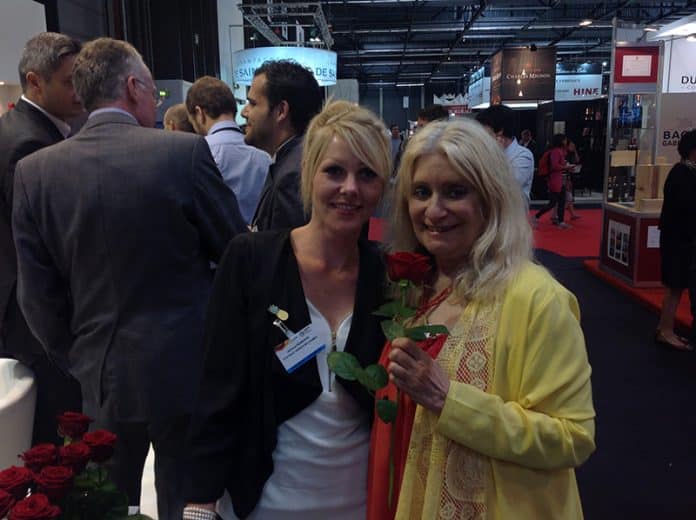 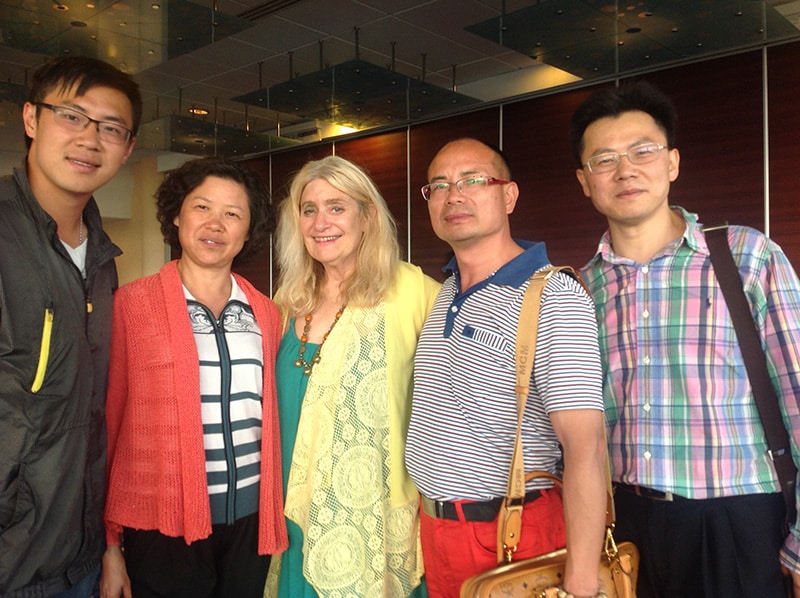 Bordeaux France – (June 14- June 18, 2015) -This year Vin Expo, the world’s largest wine and spirits exhibition was held in Bordeaux, France from June 14-June 18. It has been held in odd numbered years since 1981. Not only does Vin Expo provide opportunities for buyers to come to meet producers and taste their beverages but it also organizes conferences about industry-specific issues.

It is a beautiful venue specifically because there is an outside pavilion that faces the lake and visitors are able to dine in restaurants or eat oysters and other food from venders. Visitors can cross a bridge across a lake between the congress center and the exhibition center.

This year there were 48,500 visitors , 2,350 exhibitors from 42 countries. Professionals from 151 countries attended. Compared with 2013 there was an increase of 14% of Chinese visitors who accounted for 36% of total visitors making China the foreign country with the most international visitors. United States,the country of honor, was the second country in number of international visitors up 14.5% compared to 2013. The third international country for visitors was Spain and the fourth was Italy. England was in 5th place and Germany in 6th place.

Tasting Flights, new this year, was a system for visitors to taste different rosés, sparkling wines provided a place where visitors could taste some wines before visiting stands.

The press service organized One 2 Wines meetings where buyers could meet producers. Over 1000 meetings took place particularly with Chinese and American buyers.

Two conferences “Inside the US Market” in partnership with the magazine Wine Spectator and “Africa the future destination for wines and spirits” were very successful.

My experiences at Vin Expo were very enjoyable. While I have visited Vin Expo twice before, this year was special for me.

To facilitate faster transportation and avoid the traffic jams of previous years, the extension of tramway line C enabled visitors to get to Vin Expo from the center of Bordeaux in about 20 min.

I went a day earlier to attend the 15th anniversary celebration of Citadelles du Vin on June 13. It was held in the Casino overlooking the lake. Created in 2000 to promote the diversity and quality of wines from different countries, it is organized by the CDV (Concours des Vins a non-profit association created in France in 1901.

It is run by 120 members who are enthusiastic about wine and judge the wines in competitions; The name Citadelles du Vin was chosen in honor of two citadels The Citadel of Blaye and The Citadel of Bourg. The Vauban Citadel of Bourg built between 1685 and 1689 from orders of Louis XIV is listed as a UNESCO World Heritage. The Citadel of Bourg was created at the end of the 16th century, destroyed in 1664, transformed in 1723 into Château de la Citadelle and then destroyed by a fire in 1944. It was rebuilt in 1963 and has betautiful French gardens. It has a terrace that overlooks the Dordagne River;

The 2015 competition had 1204 wines and spirits from 30 countries; The top 10 countries of which Hungary was the country of honor were:

I had the pleasure of attending with my colleague, Jianbin Pan called Pan, his sister visiting France from China, Lina Pan, his brother in law Wen Chang Zen and his nephew Bojun Zeng. 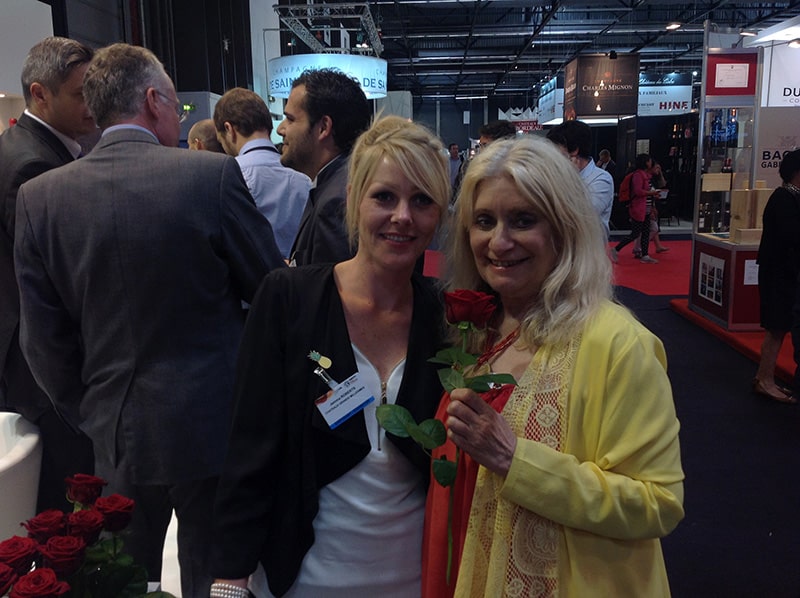 The presentation of the awards, judged by strict competition, was thrilling as the award winners were presented with their awards. Two types gold and silver were awarded to no more than 30% of the wines submitted. New in 2015 was that adhesive wines were presented to place on the wines. There was a special price per country awarded to the highest scoring Citadelles d’Or in each country provided that a minimum of 10 wines had been entered for that country, Malbec special prize, Cabernet Savignon Special Prize VINOFED special prize selected by the President and members of VINOFed, Sommeliers special prize,

After the awards ceremony; we enjoyed tasting the delicious wines, meeting the producers and other guests and delicious appetizers served by waitresses and waiters We went to the balcony and took pictures with the background of the river.

We visited Vin Expo and enjoyed meeting the producers I know from my wine business. All of them were very cordial and we enjoyed tasting their wines of exceptional quality.

This year the press room offered their usual good beverages along with a variety of delicious foods incuding ham from Spain presented by a chef, breakfast foods including fruit, croissants and other pastries; Throughout the day the press could use the computers and also eat and drink.

The conference “ Destination of the future for wines and spirits” organized by VINEXPO Academay, he was very informative. The conference was presented both in English and French and simultaneous interpretation was provided. Consumer spending in Africa is forecasted to reach $1.4 billion by 2020 and an increasing number of young, middle-class Africans are enjoying new disposable income for the first time. Identifying growth opportunities in this complex market is a challenge.

The market for South Africa is different from the rest of Africa; According to Miguel Chen, head sommelier at Tsongo Sun Hotels of South Afica, sales to young executives under 40 represent 50% of wine sales. 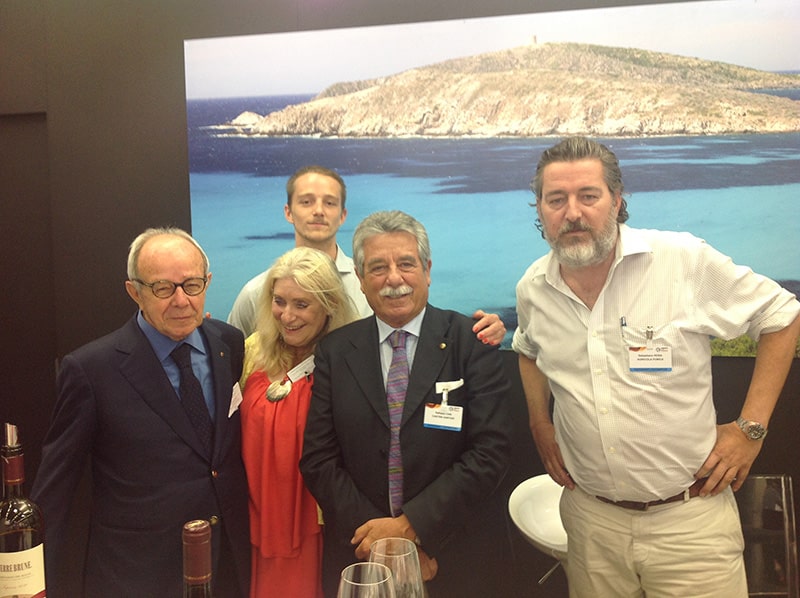 “A panel of experts on the African market, with their combined experience and market know-how gave the audience some vital keys to unlock an understanding of doing business in Africa. The panel included Miguel Chan (Head Sommelier, Tsogo Sun Hotels of South Africa); Pierre Castel (President & Founder of Castel Group – a pioneer of the African market for over 50 years); Dan Mettyear (Africa specialist with the IWSR); Pierre De Gaetan Njikam Mouliom (Deputy-Mayor of Bordeaux & Head of Partnerships with African Countries) and Gihane Ramatou Idi (Trade Advisor Agrofood, Business France). The panel considered four areas: the economy; consumers and their attitudes; the market, and finally tourism. “ They explained the difficulties of bringing wine into Africa and particularly the way the Nigerians smuggle it into Nigeria. The crowd laughed as they knew this.

An interesting experience was meeting a wine buyer from Singapore in a restaurant next to the hotel I was staying at on a pedestrian street in the center of Bordeaux. He was with two friends; I asked him how he was enjoying Vin Expo. He said he did not attend but came to Bordeaux just to meet his friends. 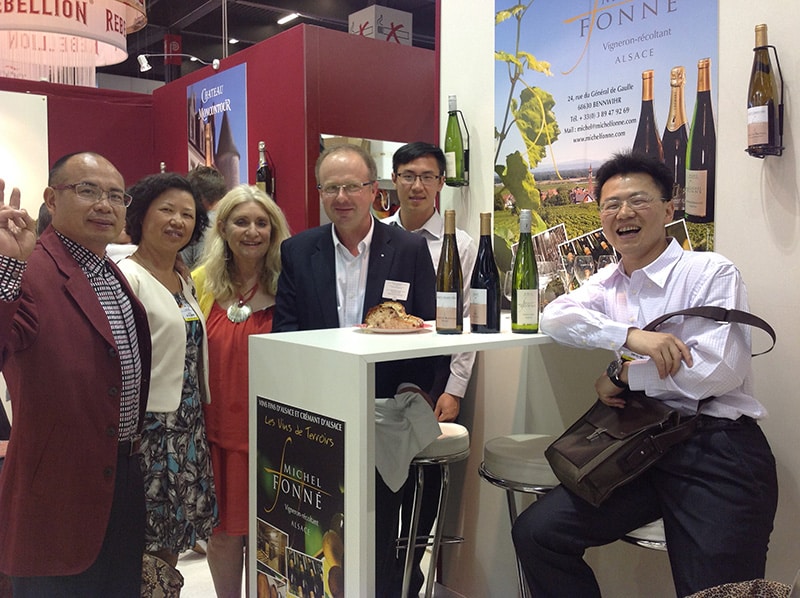 The best pizza in Bordeaux is made by a friend of mine Agnes at Luna Pizzeria 45 quai Richelieu. She made her special pizza for me and told me about her visit to Morocco. She brought back some huile d’argan and sold it to some people to get money for her trip to Morocco and to help her friends there.

I stayed a day after Vin Expo to go to the beach, Aracachon near Bordeaux as I had never been there. What a beautiful beach! I tried to see the Dunes Charos, the largest dunes in the world and so took the bus that was at the train station in Aracachon; There is one bus per hour. When I arrived I realized that I did not have time to see them as it takes time to climb up and walk down, so took the next bus back to Aracachon to go to the beach. I enjoyed walking along the beach, seeing the sculptures and eating mussels for lunch outside in a restaurant facing the ocean.

Vin Expo 2015 was very interesting and enjoyable exhibition for both the exhibitors, visitors and conference speakers.