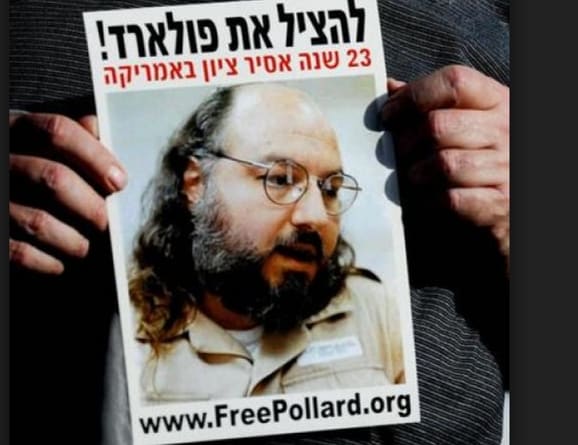 “….the depth of Pollard’s info that he passed on to Russia (amongst others) was as damaging as the Rosenberg’s was during that era. Devastatingly state of the art. Virtually everything that we knew/know about nukes….” (US Navy nuclear weapons expert exclusive to Veterans Today)

Israel is demanding the immediate release of Jonathan Pollard. Pollard, sentenced to life in prison for spying against the United States is a hero in Israel. Jonathan Pollard, an American of Jewish ancestry and Zionist extremist views who publicly acclaims that he tried to destroy America to help maintain the “racial purity of Israel.”

Pollard may have been spying for Israel but all the information he stole, a truckload of America’s most vital secrets, all went to the Soviet Union.

Why did Israel send this information to Russia, the names of all American intelligence assets behind the Iron Curtain, the exact locations of all NATO nuclear weapons facilities, missile silos and detail on how to defeat America’s defenses from nuclear attack? America doesn’t openly admit it, but this is exactly what was done, and done with one purpose, a surgical strike on America, starting and ending World War III in hours.

This is the current deal Israel is offering this time; If America releases Pollard, Israel agrees to suspend its 62 year ethnic cleansing program against Palestinian Muslims and Christians, for a short time at least.

The American public has never been told the truth about Pollard. Current figures of deaths directly attributed to Pollard’s spying are at between 110 and 120 American CIA agents and up to 1600 top American intelligence assets that were foreign nationals.

Minimally, Pollard should have faced 110 murder counts for American victims alone. He should have been tried and executed many years ago except for intercession by the government of Israel. Since Pollards sentencing in 1987, they have continually demanded his release.

Pollard wasn’t a spy, he was a terrorist.

Pollard had only one purpose, not to spy for Israel but to enable the Soviet Union to launch a successful nuclear “first strike” on America. Pollard didn’t act alone but had a series of handlers in Tel Aviv and Moscow,

For some reason, the State of Israel has never been called to account for its full complicity in Pollard’s crimes. Dozens of Israeli military and intelligence officials were fully complicit in going along with Pollard and should have been extradited to the United States and tried for their crimes.

Instead, Pollard and his accomplices in Israel are treated as national heroes and the American government has remained silent. Moreover, the American press, even when reporting Israel’s current demand for Pollard’s release, fails to outline the most basic facts of the case and, in particular, the most glaring inconsistencies.

Though the facts behind the Pollard disaster have never been made public, members of America’s military, intelligence and national security organizations knew, they had to, it was their job to try to defend a country left vulnerable to attack.

Stories of DEFCON alerts tied to Pollard, are spoken of quietly, hushed voices, among retirees, pilots from the Strategic Air Command, NORAD personnel and other top military commands, both American and NATO partners.

Pollard dangled victory in front of a Soviet regime that was the most radical and thoughtless in their history, at a time when the signs of the collapse were becoming clear.

ISRAEL’S SIDE OF THE STORY

This is the rationale Israel gives for asking for Pollard’s release:

The Reagan Administration was withholding critical intelligence on potential terrorist attacks on Israel. (Editor’s note: Coincidentally, after Israel’s withholding information that would have prevented the attack on the Beirut Marine Barracks in 1983, killing 241 Americans including 220 Marines.)

President Reagan’s betrayal of Israel and the support for terrorists shown by people on his National Security Council, including advisers who were supplying Iran with advanced weapons including the Hawk anti-aircraft system and 1500 advanced TOW anti-tank missiles. (Iran Contra)

Key Reagan officials were actively building Iraq as an American surrogate power in the Middle East, offsetting Israel’s role as sole nuclear power in the region.

(Unstated but clearly implied) The Soviet Union had, by 1982 become a more reliable partner for Israel and was likely to come out the winner in the Cold War. (Editor’s note: Worst guess of all time)

Wolf Blitzer, then of the Jerusalem Post, interviewed Pollard in his jail cell and wrote an article calling Pollard “Israel’s Master Spy.” Blitzer tried to paint Pollard as victim of an American witch hunt, the victim of an anti-Semitic FBI. The Washington Post published the Blitzer account and American media pulled in behind this false cover story painting Pollard as a victim.

Blitzer used his support of Pollard to vault himself to the top of Americas most respected media, the voice of CNN.

What is not reported is that Blitzer was only able to “spin” Pollard as aiding Israel because the damage done to the United States was so severe that it was and is classified. Pollard and Blitzer talked about stealing intel on the PLO and Libya, information long shared with Israel but nothing about NATO order of battle or war plans against a Soviet ground offensive against Western Europe, the real heart of Pollard’s efforts.

The deal cut Pollard, leaving him alive, is the equivalent of giving a drunk driver who plows through a sidewalk filled with kindergartners a ticket for a broken tail light.

WHERE IS AMERICA’S PRESS?

The Pollard story should be a hot one. We have CIA agents rounded up, tortured for months, their networks turned, hundreds head for the gulag, more get a bullet in the back of the head. America is left blind and defenseless during the most brutal period of the Cold War, a period when the Soviets had a real superiority in missiles and the ability to hit any target with pinpoint accuracy, something continually misreported by America.

The nuclear Armageddon prayed for by Christian Zionists would have been a reality, for America at least. Russia would have survived relatively unscathed except for the radiation clouds from North America and Western Europe. This is the real story of Pollard, one totally blacked out in the press. Why is no one asking about this?

Admiral Shapiro, who was himself Jewish, stated that he was troubled by the support of Jewish organizations for Pollard: “We work so hard to establish ourselves and to get where we are, and to have somebody screw it up… and then to have Jewish organizations line up behind this guy and try to make him out a hero of the Jewish people, it bothers the hell out of me”.[10]

Eric Margolis alleges that Pollard’s spying may have led to the capture and execution of CIA spies in the Eastern Bloc after Israel sold or bartered Pollard’s information to the Soviet Union.[60] According to one theory , Israeli businessman and convicted Soviet spy Shabattai Kalmanovich may have been made a scapegoat for information from Pollard that had been willingly shared by Israel with the Soviets in order to secure the release of certain Jewish scientists in the USSR.[61]

Ron Olive, retired Naval Criminal Investigative Service, led the Pollard investigation and in 2006 published the book Capturing Jonathan Pollard – How One of the Most Notorious Spies in American History Was Brought to Justice. In his book, Olive writes that Pollard was not serving Israel solely, and that Pollard confessed to passing secrets to South Africa and to his financial advisers, shopping his access to Pakistan and recruiting others for money.[62]

EQUAL JUSTICE FOR ALL WITH SOME EXCEPTIONS

A few weeks ago, a serial killer was arrested in Atlanta, boarding a plane for Israel. For decades Israel was a “get out of jail free card” for anyone, with extradition totally impossible, no matter how serious the crime.

If an African American kills a police officer in any state, he will be executed. Are we saying that, if for instance, the murderer is of Jewish heritage and he kills a CIA officer, even a hundred CIA officers, he can reasonably expect to spend his reflective years in a beach front condo in Israel? Do the families of the dead have to see his beaming face on Israeli television or read his commentaries in the Jerusalem Post?

Well, this is exactly what Israel is asking for and is holding the lives of thousands of Palestinians hostage as a bargaining chip.

This sounds to me like the actions of a terrorist state.

What the hell Gordon? Ya’ got something printed that I cannot find ANYthing to argue with. I feel…kind of depressed. Just kidding.

You know my background, so you know I can’t go into some things, but….the depth of Pollard’s info that he passed on to Russia (amongst others) was as damaging as the Rosenberg’s was during that era.

Devastatingly state of the art. Virtually everything that we knew/know about nukes.

Combine it with what Walker gave, along with what the couple working at Los Alamos TRIED to give away to ”Venezuela” (and some say that they had already offered it/sold it to Russia & China), and it’s fairly evident that our enemies know pretty much everything we know. I was told at one time that the amount of money spent by Russia and China combined, on obtaining our technology by espionage, was absolutely minute in consideration of what the costs to them would have been if they had to use their own technology, and therefore it was given the highest priority.

They placed virtually no limits on what they would pay for critical design info, and yet, amazingly, they usually got it at bargain basement prices. In the case of the Rosenberg’s- for free. Same for Pollard and I believe Ames. I doubt if we’ll ever truly know what nuke info Walker and his son passed on to Russia, but it was sold incredibly cheap.

A few thousand dollars for the entire Polaris-sub codes being used in the Pacific, for instance. Much less for entire copies of nuke IPB’s and weapon assembly summaries.

To the point though Walker will never be released I’ve been told, and I believe it. He pissed off the wrong people with his arrogance. But Pollard? Probably. G-d damn the people that allow the castration of this country.