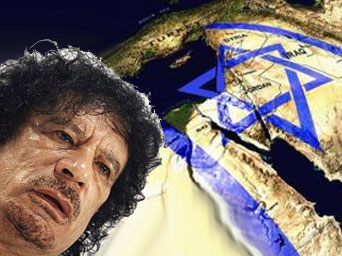 The pro Gaddafi media has been on steroids shoveling out all their NATO monster stories…slaughtering civilians intentionally, destroying civilian infrastructure, etc.  And when it comes to the rebel command we have heard of them being Al Qaeda led, CIA, SAS, …almost like they had a roulette wheel somewhere with all their favorite villains on in.

We now have incontrovertible proof that Israelis, working in Tripoli, actively managed Gaddafi’s intelligence services.  When the inner sanctum was cranked open and BBC video teams entered, the documentation of this strange partnership was exposed for the world to see.

Apologies for the audio being low on this. Just turn up your speakers. Thanks

With Intel analysis you are also always looking for what is conspicuously missing. And in the present case, has been Israel. Despite their historically having their noses in everything in the region securitywise, there has not been a single mention.

VT has uncovered that Israel has been working so closely with the Gaddafi regime that they were running his Homeland Security Headquarters…the countrywide communications intercepts and the torture chambers downstairs.

The companies identified, French and Israel partnerships which include EADS and IAI (Israeli Aircraft Industries,) manufacturer or the EAGLE systems, drones used for surveillance, signals intelligence gathering, target acquisition and attack, are identified as contractors.

Their drones are being used in Gaza now, not just for target acquisition but for delivering cluster munitions and American “Hellfire” ordnance as well.

The French firm Amesys is responsible for sensor arrays and signal’s interception equipment.  However, as there is no documentation in French seen onsite, no French operators would have been in Tripoli.

The French are notoriously “testy” about reading, speaking or writing in English and will generally only do so under threat of torture.

Over the past few days we have been shifting gears with our readers the Libyan story. It is now shifting over from bits and pieces reporting to one where we will have a solid evidence trail.

The bodies of executed victims (on both sides) will no longer be theoretical. Captured cel phone videos of their horror are already in NTC control. The tens of thousands of missing arrestees will no longer be a theory.

I was working on a Gaddafi White Collar Mercenaries piece yesterday when this BBC film crew tour took us through the open doors of his Homeland Security Operation center. Yes folks, Santa has come early this year. I had my fingers crossed and prayed that I would not be seeing burned out rooms.

There were rows and rows of hard copy archive shelving holding what was treasure trove of intercept records. Obviously phosphorus grenades must have been in short supply, or these folks took off at the last minute. But then it got better.

As the tour continued there was shot after shot of signs, admin instructions and documents…all in English !!!

Let that sink in a minute. Here were are in Tripoli, in Gaddafi’s security brain center, something which had obviously been in operation a long, long time…and the language de jour???….English.

BBC gave us a few examples of finds.

One was a cell phone chat between rebel combatants. Another batch contained a file of British calls being monitored, Libyan ex-pats most certainly. No computers were shown, but you can bet your life that the Israelis bugged out with all the hard drives.

What we have here is a foreign mercenary run security operation, partially due to Gaddafi’s need to keep an eye his defecting civilian and military people, and to keep his midnight raid people busy.

The torture center was on the floor below the operations center. The NTC claims 40,000 detainees are still missing.  Were their fates sealed in this room?

An Eagle Amus document popped into view…the French partners of the Israeli intercept equipment. With the office run in English, with Arabic translators of course, we really have a shot list of helper culprits…Canada, Britain, the American CIA, or the French…all NATO countries.

But this would have them helping Gaddafi spy on themselves, effectively. So scratch them.  But there is another country, not in NATO, well known for always serving only their own interest regardless of public affiliations…and that is Israel.

During the Libyan war mass media gave virtually no background coverage to Gaddafi’s long time dealings with the Israelis.

We have reported here that the Gaddafi sons, particularly Saif, were shuffling back and forth to Israel, with one trip lasting a week.

The early African mercenary story with the Israeli contractor was in the Israeli print news.  And Gordon Duff recent article reporting Said Gaddafi’s funding of the Africa Islamic Council’s anti-Hezbollah efforts in Lebanon.

MSM found this…uninteresting, or Mr. Murdoch might have disapproved.

Why was Saif doing that? The benefit to the Israelis is obvious. But what was Saif getting in return for the effort?

Was he there to borrow money maybe, or to tap into the Israeli’s talent reservior for electronic intercept hardware, software, and experienced personnel, especially the language skills necessary.

Are there other suspects, the Serbians, Turks, Belorussians, Poles, Georgians ??? What could they really bring to the table in this capacity. Nothing really.

So there are really only two choices…one of the main NATO countries, or Israel. We have placed our bet. Welcome to the real world folks. It’s a nasty place.

More will be coming on the Gaddafi white collar mercs….the civilian technicians and military officers. There is a long history here.