Home Investigations Turkey on path of war – with Islamic State or Kurds?

Syrian opposition group flag on the Turkish side of the border

MOSCOW, July 28. /TASS/. Turkey has been bombing positions of the terrorist Islamic State and Kurdish militants in Iraq and Syria in an attempt to address a complex, multi-tier task, one of its aims being consolidation of the ruling party’s political positions on the domestic scene, polled experts have told TASS.

Last Friday and Saturday Turkish warplanes bombed and rocketed the positions of the Islamic State and of Kurdistan Workers’ Party in Syria and Iraq. The raids followed a terrorist attack on the outskirts of the city of Diyarbakyr, which killed two Turkish soldiers, and an explosion in the city of Suruc, resulting in the loss of 32 lives. 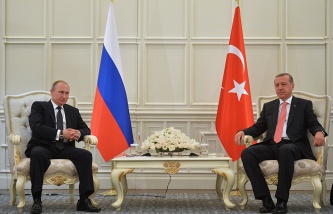 Putin and Erdogan exchange views on situation in Middle East

The armed conflict between the Kurds, determined to establish an independent state, and Turkey is more than 30 years old. Its death toll is already above 40,000. The leaders of the Kurdistan Workers’ Party have said that the 2013 truce with Turkey, so far observed by and large, no longer makes sense.

NATO’s Council is to meet in emergency session in Brussels at the ambassador level at Turkey’s request. Under Article 4 of the Washington Treaty of April 4, 1949 any ally has the right to request consultations whenever in its opinion there is a threat to its territorial integrity, political independence or security.

On Saturday, Turkish President Recep Tayyip Erdogan and Russian President Vladimir Putin exchanged opinions of the situation in the Middle East from the standpoint of resistance to threats and challenges coming from the Islamic State, the Kremlin’s press-service said. The discussion was requested by Turkey. The two leaders stressed the importance of joint efforts by all parties concerned in the struggle against the Islamic State.

Reactions from Turkey’s NATO allies to the air strikes against the territories of Iraq and Syria vary. The United States supported Ankara. White House officials recalled that in Turkey the Kurdistan Workers’ Party was considered a “terrorist organization.”

Germany’s Chancellor Angela Merkel urged the Turkish authorities to make a distinction between the Kurds and the Islamists and to go ahead with peace talks with the Kurdistan Workers’ Party. NATO’s Secretary-General Jens Stoltenberg warned the Turkish leadership against more air strikes against the KWP positions, adding that more attacks would upset a peace agreement with the Kurds.

Russia’s leading expert on oriental affairs, Georgy Mirsky, has pointed to the surge of anger in Turkey that followed the terrorist attacks by Islamic State militants.

“No government could’ve refrained from responding to bloody terrorist attacks. Erdogan was obliged to fight back,” he said.

“The Turkish authorities are well aware that the Islamic State is a real enemy. Should that group seize Damascus and Baghdad and move further south into the oil producing provinces of the Middle East, there will be no stopping it. Turkey will be the Islamic State’s next target. Yet Ankara believes that the Islamic State will be its enemy tomorrow, while the enemy of today are the Kurds. This explains why Turkey retaliated IS terrorist attacks with attacks against the Kurds,” Mirsky told TASS.

“Also, it should be remembered that Ankara provides support for the armed opposition in Syria fighting for the overthrow of the Bashar Assad regime. The whole package of Turkey’s initiatives, including the creation of a buffer zone on the border with Syria and permission granted to US aircraft to use the Incirlic air base near the border with Syria for attacking Islamic State positions are expected to cause the electorate rally around the ruling party in the run-up to early parliamentary elections,” Mirsky believes.

The president of the Middle East Institute, Yevgeny Satanovsky, agrees.

“Ankara pretends that it attacks Islamic State positions. In reality all of its blows are against the Kurds,” he believes. In his opinion the US-backed buffer zone on the border with Syria is being created not so much for granting asylum to Syrian refugees as for intervention in Syria with the aim to oust Bashar Assad.”

“As for the reasons why the White House, the German chancellor and NATO’ secretary-general disagree over Turkish air raids against the Kurdistan Workers’ Party, one should remember that Germany is home to millions of ethnic Turks and Kurds. Neither Angela Merkel, nor Jens Stoltenberg will be happy about clashes between the two communities in Berlin or Hamburg,” Satanovsky told TASS.

The experts agree that building a broad international coalition to fight with the Islamic State would be hardly possible for a number of reasons.

“Each state in the Middle East and the West will decide whether it should fight against Islamic State or support it proceeding from its own interests,” Satanovsky believes.

Mirsky believes that no country looks determined to fight against the Islamic State in earnest.

“Nobody is sending its ground troops against the Islamic State. Neither Russia nor Iran has received an invitation into the US-led international coalition. A powerful common front would spell the end of the Islamic State, but the interests of would-be participants are varied and their religious differences irreconcilable,” Mirsky said.