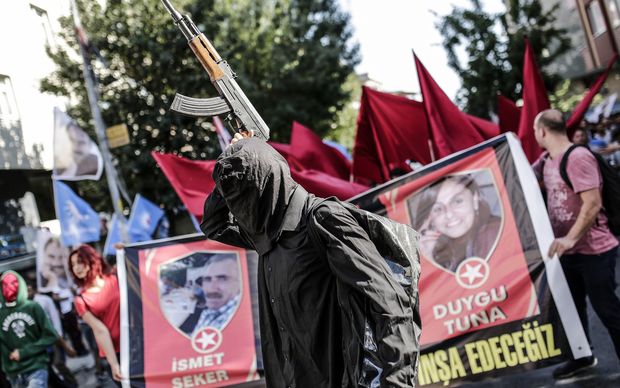 [ Editors Note:  VT would like to thank all the sources that quickly contributed to this article on request. You know who you are. We are you and you are us, when we are able to put something like this out quickly. I thank you all for our VT staff and readers… Jim W. Dean ]

Today, all 28 NATO nations agreed to back Turkey in what is claimed to be their war on ISIS, four years late and likely to inflame the long predicted apocalypse.

Erdogan, citing terror attacks has entered on a path of terrorism and mayhem now “NATO certified” as a just conflict.

This week, by all accounts, Turkey attacked itself, wiping out 32 Kurds, opponents of Erdogan’s continued dictatorial rule despite his election loss. The bombing in Suruc didn’t announce Erdogan’s personal war on the Kurdish people; that had been going on some time.

Murdering political opponents is nothing new. In 2013, Turkish intelligence (MIT) murdered three Kurdish activists in Paris, all women, an execution according to the French newspaper Le Monde.

There is nothing new about any of this, after all Turkey has been waring on the Armenian people for a century, call it what you will, genocide, a holocaust, ethnic cleansing, and that war continues today as well with murders and executions around the world. As you will see, the pattern continues.

Herut Sassounian of Veterans Today sees the moves behind the emergency NATO meeting as pure self-interest on the part of Erdogan:

“Rather than fighting ISIS terrorists or cooperating with United States military operations in Syria and Iraq, Erdogan’s true intent is to consolidate his own hold on power and accomplish the following self-serving objectives:

1) Turkey’s President realizes that should his ruling party fail to form a coalition government, he would be obliged to call a new round of parliamentary elections. Therefore, by taking bold actions against ISIS and Kurdish fighters, Erdogan hopes that Turkish voters would give his party the few extra seats needed to regain a majority in Parliament.

2) Another important purpose for bombing Northern Syria and PKK bases in Iraq and arresting hundreds of Kurdish militants in Turkey is not fighting ISIS, but preventing Syrian, Iraqi and Turkish Kurds from joining hands to create an independent Kurdistan.

3) By carrying out military raids in Syria, Erdogan hopes to accomplish his long sought dream of toppling the Syrian government and installing a puppet regime, thus expanding his personal power as a neo-Ottoman Sultan.

4) Finally, by making brash declarations against ISIS and allowing Americans to use the Incirlik airbase, Turkey intends to convince the United States and Western Europe that it is a reliable NATO ally and loyal partner in the fight against terrorism. Creating such a positive image is particularly important at a time when the major powers are finalizing a nuclear agreement with Iran, which would increase the latter’s strategic role in the region and diminish that of Turkey.”

Erdogan will have to go further, and his attempts to regain power and build empire will have unseen consequences.

Turkey has one real political goal, wipe out the Kurds, every man woman and child. The Kurdish people are the primary political threat to keeping Turkey together, the last vestige of a corrupt monstrosity that shook the world 500 years ago.

Turkey is now again as it had been, the “Ottoman Empire,” in the mind of Recep Erdogan at least. After years of unsuccessfully knocking at the door of the European Union, now an admitted failed concept, Erdogan’s ambitions driven by his “strange bedfellow” allies, has turned hideously brutal.

Little does Erdogan see himself as the “monkeyboy” of his masters from Israel, Saudi Arabia and Qatar, such is his delusional state. Buoyed on by his “bought and paid for” friends in Washington, McCain and company and an over-healthy dose of hubris, he may well be proven right.

Is There Such a Thing As Going Too Far?

These are the realities of the situation:

As the US has announced in recent days, ISIS is no longer winning. Were there to be a credible air assault on ISIS by “coalition” forces, using forward air controllers on the ground as called for by Senator John McCain in recent hearings, this would be the icing on the cake.

Curiously, in closed door hearings in Washington, it was McCain that supported the $5 billion the US has used to supply weapons and training for ISIS and al Nusra forces at camps in both Jordan and Turkey. What may have driven McCain’s recent change of heart?

Erdogan’s dream of a puppet Turkish state from the Lebanese border to Anbar, with twin capitols in Mosul and Aleppo, is rapidly diminishing, perhaps as noted by McCain’s new strategy. Turkey’s real long game is oil.

Both Iraq and Syria, along with Turkey, fear a Kurdish state. 40% of Turkey is Kurdish, a fifth of Syria and a third of Iraq. There may well be as many as 50 million Kurds, sitting on much of the world’s oil reserves, a continuous region from the Mediterranean to the Black Sea to the edge of the Caspian.

Let’s take a look at Iraq’s Kurdistan. Before Saddam’s ethnic cleansing, Kirkuk, along with Basra one of Iraq’s oil capitols, was also a Kurdish city.

Pipelines from Kirkuk reach the Mediterranean through Turkey, there joining a network of regional spurs from Baku and elsewhere in the Caucuses.

There can be no Kurdish nation without a pipeline across Syria. This makes the Kurds a threat and has also made them friendless with the exception of the United States. Iraq’s Kurdish capitol, Erbil, is a haven for American business and was so even during the darkest days of the US war.

ISIS is Turkey’s Hammer Against the Kurds

There will be no Turkish war against ISIS and al Nusra. Turkey has been openly backing ISIS and al Nusra for years with no negative consequences, no press coverage to speak of, no domestic political outcry, not a word from the European Union or United States.

They have done so while playing host to Saudi, Qatar and Israeli special operations teams, while transiting biological and chemical weapons from the secret labs of Tbilisi, passing along thousands of American TOW and Stinger missiles to terrorists and have done so with very public glee.

Turkey has openly transited over 60,000 jihadists across its carefully guarded borders. Each must have had his or her mandatory health certificates and visas, nothing moves in Turkey without the Army watching.

For years, ISIS and al Qaeda have recruited, trained and resupplied in Turkey. Supply lines for every ISIS offensive lead to Turkey. ISIS attacks are staged from Turkish territory. Military efforts against ISIS including the “coalition” bombing campaign are predicated on stopping Turkey’s resupply of ISIS and the free transit Turkey supplies for armored columns hitting Syria and Iraq.

Turkey is home for two armored divisions long in negotiation with ISIS, kept at the ready for the final drive on Damascus that now seems so very far off.

Forty-five thousand men, mostly Syrian nationals, are being sequestered in Turkey to swoop in and share victory with ISIS and guarantee Turkey its place at the table for the fall of Syria and Iraq, as Erdogan has planned it.

Nothing of this is ever reported though, in the Middle East, it is known by children in the streets. Secretary Kerry just negotiated the use of Turkish bases for attacks on ISIS. Why is this so absurd?