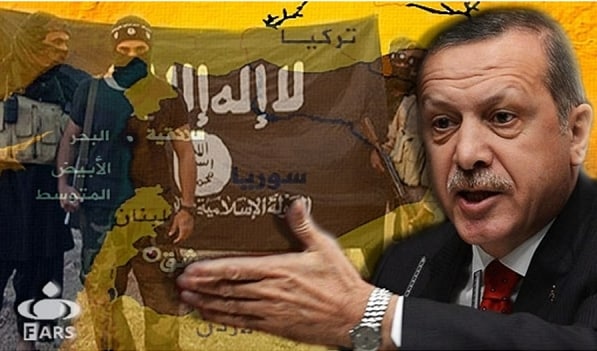 TEHRAN (FNA) – Now that Turkey has started dropping bombs simultaneously on Iraq and Syria under the pretext of fighting ISIL and PKK, one wonders to know what exactly Ankara thinks about its officials’ ignorant and terrifying comments, and – more importantly – what exactly is Turkey’s anti-terrorism policy.

We are talking about a country that until yesterday was one of the staunch supporters of the terrorist group of ISIL in the push for regime change in Damascus, but now apparently it has had a change of heart. And, of course, understand by the very definition, you can’t support and fight the same terrorist goons on two different fronts. It’s true, Turkey supports ISIL in Syria and now wants to fight ISIL in Iraq, and there’s very clear case law.

The fundamental rule of international law is clear, but not in the way that the Turks think:

-States cannot attack other states. The UN Charter embodies this rule and makes only two exceptions to it: “A state can attack another state if it is authorized to do so by a UN Security Council resolution, or if the attacking state is acting in genuine self-defense.” Syria hasn’t attacked Turkey and Turkey is not acting in self-defense. Turkey IS the aggressor.

-By destroying PKK positions deep inside Syria’s Kurdish territory, Turkey is undermining the coalition of the Kurdish groups that are standing against the ISIL and this means providing the terrorist group with a better chance of success in the war zone.

-Ankara claims as long as President Assad is in power, there will be no peace in Syria. For the moment, it is evident that military strikes will increase levels of violence and instability inside Syria and Iraq. It will do nothing to strengthen the imaginary “secular armed opposition.” Those who gain will be the most extreme forces like ISIL and al-Qaeda.

Even so, we would like to hear what the Turks have to say about this: They deny the reports  as “false” when the global media outline how Western “jihadis” and their future “brides” get into Syria through the “Jihadi Highway” in Turkey.

But considering the way the Turks throw the word “terrorism” around with abandon and claim to take the crime seriously, we think the world deserves to hear more about their stance on ISIL and their not-so-secret connections.

The world has been treated to Turkey’s ridiculous and ambiguous theories about what constitutes terrorism for too long without demanding that they explain themselves. We know the Turks think terrorism is horrible – but what do you think terrorism is? What about their “Jihadi Highway” and “ISIL Gift Shops” in their country?

Forget waiting for the next Turkish “airstrike”. If Turkey wants to be part of the anti-ISIL circus, the least the international community deserves is to hear what they think terrorism is, and what the whole region can do to defeat it. For the moment, though, don’t expect to get any clear answers from Ankara. It’s a fading actor that is struggling to play both parts: The perpetrator and the victim.