A piece of aircraft wing has washed up on the Indian Ocean island of La Reunion, triggering an influx of the world’s media eager to get the story and air crash researchers eager to identify it’s origins.

The piece of wreckage was found by a beachcomber called Johnny Bègue who is in charge of a team of eight people who have a contract to keep the popular beach clean in the town of Saint-André in the east of the tropical island.

Finding a piece of aircraft wreckage on the beach is not normal so they contacted the local authorities, thus sparking the obvious speculation that this was a piece of the missing Malaysian Airlines Boeing 777 that vanished en route to Beijing in March 2014 with 239 people aboard – Flight MH370. 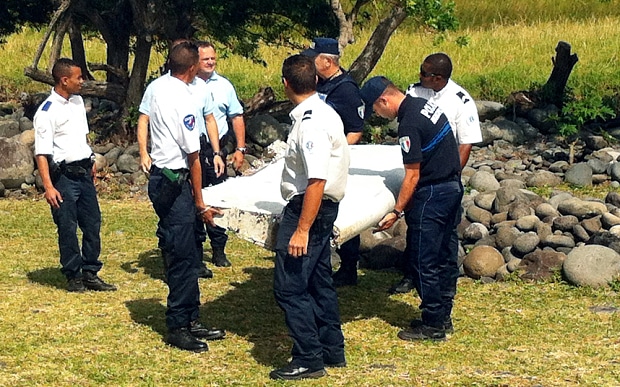 The local Gendarmes with their ‘fishy’ catch

While the world’s media cites oceanographers who explain how strong Indian Ocean currents could have brought this wreckage over 4,000km of open ocean in the 16 months since the disappearance and tell us that teams of experts from France, Australia and Malaysia are to examine the wreckage; we at VT immediately thought of the French report we published last week that offered tantalising clues that flight MH370, rather than finding a watery grave deep below the surface of the Indian Ocean actually ended up spread across a Ukrainian potato field, shot down by an unidentified jet fighter.

A French report is published that points to MH370 reappearing as MH17 before being destroyed over rebel-held Eastern Ukraine; almost immediately a possibly contradictory piece of aircraft wreckage washes up on the nearest piece of French territory to the claimed final destination of MH370.

I immediately thought of prior instances of convenient pieces of aircraft wreckage being suspiciously planted – the aircraft engine dumped out of the back of a van onto a NYC pavement on 9/11 and the abandoned mine at Shanksville that Flight 93 supposedly disappeared into, leaving what the local sheriff described as looking like a trench someone had dumped a truckload of garbage into.

The MH17 cover-up is the largest and most complex false flag conspiracy since 9/11; hopefully, more than a decade of study of the latter has given us the ability to better investigate the former. Not least, we should have learned to view any and all ‘evidence’ presented to us with a great deal of suspicion.

Writing in the UK’s Telegraph newspaper, Laurence Dodds offered a neat summation of the situation:

“As long as MH370 and its 239 passengers and crew remained in this realm, they could be anything anyone wanted them to be. The lack of evidence opened up a gap which people rushed to fill with their hopes, fears, and obsessions. Not just the families of the victims, but also conspiracy theorists, both amateur and professional, who had a wild range of ideas about what really happened.

Some thought it had landed at the US air base on Diego Garcia as part of a CIA special operation. Some thought it had been hijacked and would return, bearing a stolen nuclear weapon, on the tenth anniversary of 9/11. Some even thought it was the same plane as the one shot down over Ukraine several months later. Some think it will one day turn up on the moon.

If the debris is confirmed as part of MH370 – and of course, it still might not be – many of those people will give up; the mystery is over, the possibilities are closed down, and the plane is back on Earth. But not all of them will. In fact, I think a pretty big proportion of them will refuse to accept it.“

I cannot, however, be counted among the ‘pretty big proportion’ who refuse to accept this piece of aircraft washed up on La Reunion came from a Malaysian Airlines Boeing 777. In fact, I am pretty damn sure that is precisely what it is!

I think that this mysterious piece of wreckage that has turned up in the nick of time to be cited as counter-evidence to the French report about the evidence found on the ground in Ukraine that strongly indicates MH370 met it’s end there, rather than the deep southern ocean is nothing more than a cynically planted herring of the distinctly red and fishy variety.

Therefore, I believe that the culprits will have obtained a piece of Boeing 777 wing and dumped it in the sea just off the beach of La Reunion; after all, their nefarious plan would quickly come to nought when the experts identify it’s origins as being a different make or model of aircraft.

Furthermore, I strongly suspect I know where they obtained this piece of wing – from the Dutch hangar housing the wreckage scooped up out of that Ukrainian field to be studied by a Dutch air crash investigation team. The clear implication being that the culprits behind this planting of evidence and the culprits behind the disappearance of MH370 are one and the same and they have the full co-operation of the Dutch authorities.

I am sure these culprits are expecting this dish of hareng rouge avec tropical aromatisé* they have served up for us will fully satiate the great majority who were hungry for answers to the mystery of Flight MH370. Personally, I think it’s just too fishy to swallow.