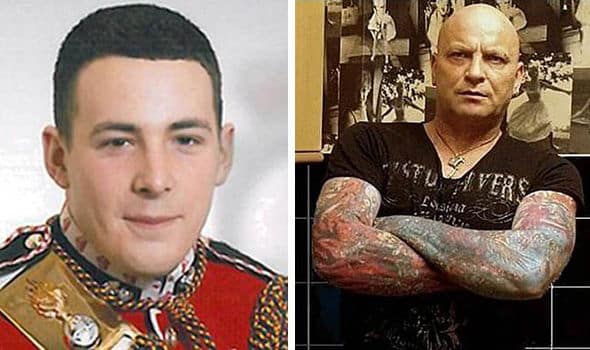 Friday, 31 July, London; Chris Spivey, a tattoo artist and internet blogger was convicted in court of having harassed the family of Lee Rigby. The reporting of the Sunday Express newspaper is typical of the British media’s reaction:

AN internet troll who claimed the death of Fusilier Lee Rigby was a hoax intended to stir-up anti-Islamic feelings has been found guilty of harassing the soldier’s heartbroken family.

Tattoo artist Christopher Spivey, of Rochford, Essex, launched an 11-month hate campaign which saw him post a number of unfounded claims relating to the brutal murder of Fusilier Rigby by Islamist extremists in Woolwich.

The 52-year-old blogger came up with conspiracy theories that Fusilier Rigby’s murder was plotted by MI5 to encite Islamaphobia in Britain.

He said the family had been in on the hoax and photos of the Rigbys had been doctored on Photoshop.”

VT Readers outside Britain are most likely unaware of the Lee Rigby case so let me give you a short overview, courtesy of Wikipedia:

“On the afternoon of 22 May 2013, a British Army soldier, Fusilier Lee Rigby of the Royal Regiment of Fusiliers, was attacked and killed by Michael Adebolajo and Michael Adebowale near the Royal Artillery Barracks in Woolwich, southeast London. Rigby was off duty and walking along Wellington Street when he was attacked. Adebolajo and Adebowale ran him down with a car, then used knives and a cleaver to stab and hack him to death. The men dragged Rigby’s body into the road and remained at the scene until police arrived. They told passers-by that they had killed a soldier to avenge the killing of Muslims by the British armed forces. Unarmed police arrived at the scene nine minutes after an emergency call was received and set up a cordon. Armed police officers arrived five minutes later. The assailants, armed with a gun and cleaver, charged at the police, who fired shots that wounded them both. They were apprehended and taken to separate hospitals. Both are British of Nigerian descent, raised as Christians, who converted to Islam.

On 19 December 2013, both of the attackers were found guilty of Rigby’s murder. On 26 February 2014, they were sentenced to life imprisonment, with Adebolajo given a whole life order and Adebowale ordered to serve at least 45 years. The attack was condemned by political and Muslim leaders in the United Kingdom and in the international press.”

I would venture to say that you will not find anyone in Britain who has not heard the name Lee Rigby and find it very difficult to find anyone who didn’t know who he was and how he met his unfortunate end – such was the volume of media coverage.

The two young black men convicted of the killing acted very strangely in hanging around after their crime and most memorably, one of them made a political speech to an apparent passer-by who recorded it on their mobile phone. This video was shown as the headline item on every TV news program that day and there can be few in Britain who have not seen it many times:

I watched this on the news that day and found it most suspicious for a number of reasons. I was not the only sceptic and immediately, the internet was buzzing with activity by those who weren’t buying the official version of events. Foremost among those who tried to offer alternative explanations to those being fed to us by the mainstream media was Chris Spivey through his website www.chrisspivey.org.

Spivey wrote several very lengthy and detailed articles on the subject and was researching the background of the victim. I did read one or two of these articles and found them to be very controversial in their opinions but also apparently well supported by research; clearly Spivey had spent a great deal of time and effort in creating them and doing the hard slog of background research.

As I have never done any independent research of my own into the Lee Rigby case I don’t feel qualified to pass comment other than to say that I saw many things that made me suspicious and wanted to find out more – hence I had gone on the internet and read a number of articles, including those by Chris Spivey.

Now I read that Spivey has been convicted of harassment and once again, I am suspicious. The whole thing smacks of wishing to silence a critic; which, regardless of what one might think of Chris Spivey and his theories, is a type of censorship that all free thinking people should rail hard against.

A strong democracy, as Britain proclaims itself to be should not fear the voices of dissenters, to lock up one’s critics is the work of dictatorships and police states.

Chris Spivey will be sentenced on August 27.