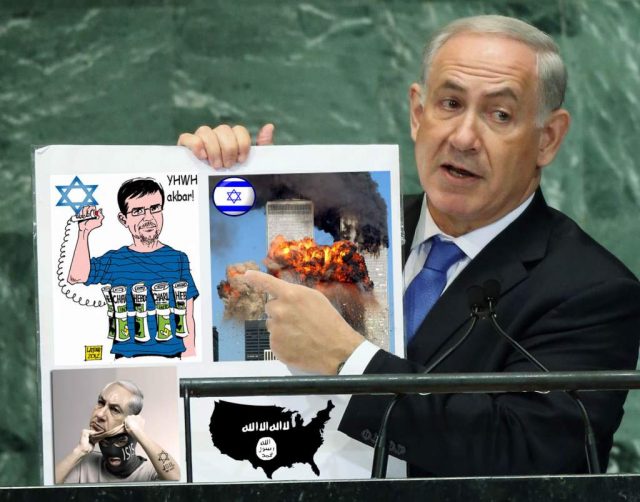 The Charlie Hebdo affair – France’s 9/11 – fizzled badly last January when the global truth-seeking community instantly exposed the deception. It was the first time in history that a major false flag had been deconstructed in real time. To celebrate, I put together the book We Are NOT Charlie Hebdo: Free Thinkers Question the French 9/11 featuring 21 leading public intellectuals pushing back against the propaganda. Here’s an update on the sizzling-hot summer book tour.

The “vacation jihad” that I warned the FBI about is coming along nicely.

(To follow my progress around the US and Canada, check out my speaking schedule. Tonight’s talk in Vancouver BC will be held at  7 pm, Native Education College, 285 East 5th Ave., Vancouver…assuming the Canadian government lets me in.)

It started off “hot” in the bad sense, when our 1993 Nissan mini-van broke down near Lincoln, Nebraska. Overloaded with four large adults and their belongings, several boxes of Charlie Hebdo books, and a big furry dog, the engine died with a hideous death-rattle in the 100-degree heat and 90% humidity. It was bad enough driving through the equivalent of a wet sauna without air conditioning. But being stuck beside the freeway for hours, waiting for triple-A to find a suitable tow truck, was more like the fire than the frying pan.

Finally a couple of 250-pound good ol’ boys showed up with a tow truck. They eyed my bumper-stickers – “THE WAR IS A LIE: 9/11 WAS AN INSIDE JOB,” “END THE CRUSADES, GIVE PALESTINE BACK,” “END THE FEDERAL RESERVE” – with raised eyebrows. The good news was that they didn’t mind cramming in four large adults and a big old dog into their cab. The bad news was that they occupied the whole front, forcing the four hominids and one canine to engage in yoga-style contortions to fit into the back.

It turned out that the points had fried, a mere $100 repair, so we didn’t have to buy the used Toyota mini-van from a bunch of Iraqis we ran into the next day in Lincoln. (Who would have thought that Lincoln, Nebraska would be full of Iraqis willing to spend the whole day bargaining in Arabic over a used van that in the end we decided we didn’t want anyway, not only because our 1993 Nissan was fixable, but also because the Iraqi who owned the van kept trying to jack up the price way above what his friends had originally set.)

So thanks to the 24-Hour Repair mechanics in Lincoln I managed to keep the ’93 Nissan (and tour) alive and arrive on time at my first event, hosted by the über-hip Mercury Café in Denver.

Then on to Grass Valley, Sacramento, Berkeley and Santa Cruz via I-80 and US Highway 50, “the loneliest road in America.”  The trip across the Utah and Nevada deserts was unseasonably pleasant; the next big heat wave didn’t arrive until we were safely ensconced beside the Pacific Ocean, the world’s largest natural air conditioner. (Watch the Berkeley talk here.)

I managed to punctuate the speaking engagements with a fair bit of body surfing. So if the Pacific is “hot” in the bad sense – sizzling with Fukushima fallout – I am likely to mutate at any time. You’d best attend my talks before I turn into one of those bloodsucking alien lizards David Icke warns us about.

Following my Bay Area and Santa Cruz gigs, we hugged the coast on Highway 101 from San Francisco to Lincoln City Oregon, avoiding the brutal 100-degree heat wave blasting everyone unfortunate enough to find themselves more than a few miles from the shoreline, then made a mad dash to Portland and an air conditioned motel room. After three speaking events in two days in Portland and Seattle, I’m now in Bellingham, Washington waiting for Canadian professor Tony Hall to show up and help me cross the border into Canada – or at least make a big stink if I’m denied entry for political reasons, as apparently happened last May.

So far turnouts have been decent and book sales excellent. Looks like I’m going to have to put in an emergency order for more books and pay Amazon outrageous premiums for ultra-fast shipping.

And if you can’t attend my talks, you may wish to buy We Are NOT Charlie Hebdo now before French President Hollande succeeds in having such “conspiracy theories” banned.