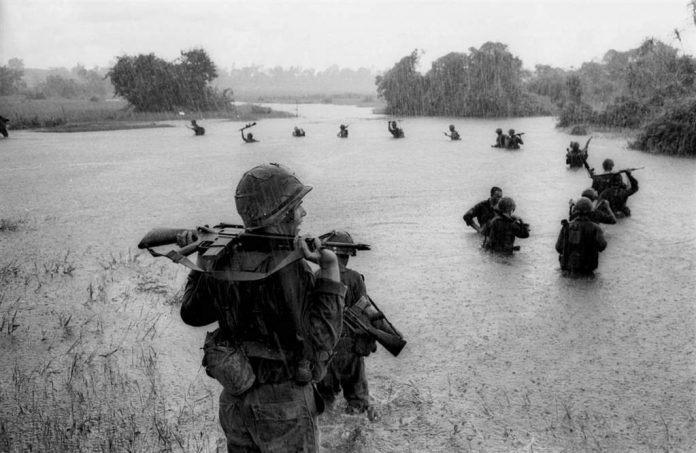 U.S. Secretary of State John Kerry (L) and Vietnam’s Deputy Prime Minister and Foreign Minister Pham Binh Minh shake hands before their meeting at Government Guesthouse in Hanoi, Vietnam August 7, 2015.
Visiting Vietnam, US Secretary of State John Kerry held up the current relations between former foes as an example to the world, calling the conflict that ended 40 years ago a failure of diplomacy that advocates of war ought to bear in mind.

Speaking in Hanoi at the end of a five-nation tour, Kerry brought up the US experience in Vietnam as a cautionary tale for politicians who rush to war. Though he did not mention the Iran nuclear deal by name, the remarks came as the White House defended the deal by presenting war as was the only alternative.

“Standing here today, I’m reminded of conversations I’ve had recently with people who talk almost casually about the prospect of war with one country or another. And I’m tempted to say: ‘You don’t have the first idea of what you’re talking about,’ ” Kerry told an audience at a Hanoi hotel, according to AP.

“For sure, there are times when one may have no choice but to go to war, but it is never something to rush to or accept without exploring every other available option,” he said. “The war that took place here half a century ago divided each of our countries and stemmed from the most profound failure of diplomatic insight and political vision.”

Present-day US relations with Vietnam can serve as a “profound and timely lesson” to the rest of the world, Kerry argued, pointing out it was a great achievement in light of the decades-long enmity. The US had backed the French colonial regime in the 1950s, supported the partition of Vietnam into north and south, and backed the South Vietnamese regime from 1960 to 1973 with hundreds of thousands of combat troops and bombing raids against Hanoi. Vietnam was reunified in 1975, after the US troops withdrew. Over a million Vietnamese died in the decades of conflict.

“Vietnam and our shared journey from conflict to friendship crosses my mind frequently as I grapple with complex challenges we face today,” Kerry said in his speech. “That we are standing here today celebrating 20 years of normalized relations is proof that we are not doomed merely to repeat the mistakes we have made in the past. We have the ability to overcome great bitterness and to substitute trust for suspicion and replace enmity with respect.”

One of the topics of Kerry’s visit was Vietnam’s prospective membership in the Trans-Pacific Partnership (TPP), intended to establish a US-led economic bloc in the Pacific Rim that would exclude China. One of the sore points in US-Vietnam relations is Washington’s continued insistence on political reforms in Vietnam, presented as a human rights issue.

“The United States recognizes that only the Vietnamese people can determine their political system and we speak with some humility on these matters, because as you can read and see, we are working hard to perfect our own system,” Kerry said. “But there are basic principles we will defend: No one should be punished for speaking their mind so long as they are peaceful; and if trading goods flow freely between us, so should information and ideas. And we believe that progress in upholding these basic human rights will absolutely serve Vietnam’s interests.”

In last month’s visit to Washington, the head of Vietnam’s ruling Communist Party Nguyen Phu Trong said that differences with the US over human rights should not be allowed to get in the way of improving relations.