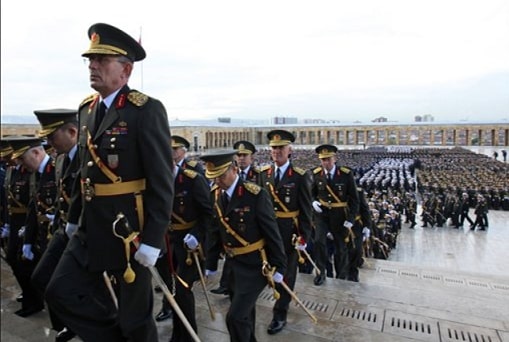 WASHINGTON DC – Last month, after two years of negotiations, Turkey and the United States reached a tentative agreement to deepen efforts and coordination in the fight against the Islamic State group (ISIS).

According to the deal, Ankara is allowing US warplanes to use its airspace and its military bases, including Incirlik. In return, Washington has subscribed to the long-awaited Turkish quest for a “safe zone” in northern Syria.

While the details of the proposed zone have not been sorted out between Washington and Ankara, some analysts believe that Turkey’s motive for wanting such an enclave is to ensure that the three Kurdish cantons declared by the Kurdish Democratic Union Party (PYD) remain territorially separated from one another.

“I think the Turkish objective is to make sure there is a wedge so that the Kurds do not control the whole border,” David Pollock, the Kaufman fellow at The Washington Institute, told Rudaw. “I think the United States does not really care about that aspect of it, but it’s willing to accept it as the price for more coordination from Turkey for Incirlik,” he added.

In 2013, the PYD declared the cantons of Afrin, Kobani and Cizire in Syria’s Kurdish areas, or Rojava.  The PYD’s armed wing, the People’s Protection Units (YPG), have been hailed by the United States as a reliable and effective force against ISIS.

The proposed “safe zone” reportedly covers Jarabulus in northern Syria, which is likely to prevent Kurds to connect the other two cantons to Afrin in the northwest.

But despite the potential close coordination between Ankara and Washington, Pollock believes that Kurds in Rojava won’t side with the Bashar Assad regime because they have received the most benefit from US airstrikes against ISIS, or Daesh as it is known in Arabic.

“The Kurds have achieved a lot even though this gets into their way. I think they cooperate closely with the US against Daesh. That’s more important right now. I actually think you could get an agreement,” he added.

Pollock ruled out that the deal with Washington will push Turkey to engage against ISIS militarily. He said that was because of the fear of a potential blowback by the Islamic group.

“It will be fine if they (Turks) start to control the border and that’s what’s expected from Turks to do,” Pollock said. “But if there will be more terrorism inside Turkey from ISIS that may change,” he added, explaining that could lead to an “angry and aggressive” response from Ankara. “If you start fighting ISIS they will fight back and it’s better to contain it. It’s safer.”

Many observers see the agreement between Ankara and Washington as a betrayal of Kurds by the United States. That is because, since the deal, Ankara has been arresting members of the Kurdistan Workers’ Party (PKK) at home, and pounding their camps in the Kurdistan Region by air and artillery.

Turkey has also started an extensive aerial campaign against the PKK, the force behind the PYD in Rojava.

US President Barack Obama on Wednesday called on Turkey to remain focused on the threat from ISIS.

“Turkey’s red line here is very strict in the sense that (PYD) harms US-Turkish relations. Those red lines, especially with PYD, are very strict pre-conditions and will likely to continue,” Kanat told Rudaw.

Sabiha Senyucel, research director at Istanbul’s Center for Public Policy and Democracy Studies (PODEM) agreed that if Turkey succeeds in establishing a safe zone in Syria, it will separate the Kurds in Syria. But she wondered how long Turkey could maintain and protect such an enclave.

She said Turkey is currently opposed to the formation of a Kurdish entity in northern Syria due to the regional ambitions of the PYD and PKK. She said the Turkish position could change if the Kurdish parties leave their regional patrons and realign with Ankara.

“If PKK and PYD choose to align with Turkey instead of with other regional powers I think that will be a perfect scenario for Turkey,” Senyucel said.