Watching the recent Republican Presidential auditions was like watching Kabuki theater where a toad like Jeb Bush attempted to rationalize the criminal actions of his older brother while at the same time riding on his badly frayed coat tails. Meanwhile an out of control Donald the brash Trump seized his moment in prime time with the ultimate narcissistic and vacuous TV selfie thereby revealing Hillary’s secret weapon ~ the total discrediting and irrelevance of the Republican Party via Donald Trump: Allen L Roland, PhD

In this world of sin and sorrow, there is always something to be thankful for; as for me, I rejoice that I am not a Republican: H.L. Mencken

The problem lies in Trump’s narcissism which, when fully released and uncontrolled, will eventually destroy the enabler herself. Witness Maureen Dowd’s recent comment regarding the debates in the New York Times ~  “Consider how Trump yanked back the curtain Thursday night explaining how financial quid pro quos warp the political system. “Well, I’ll tell you what, with Hillary Clinton, I said be at my wedding and she came to my wedding,” he said. “You know why? She had no choice because I gave. I gave to a foundation that, frankly, that foundation is supposed to do good. I didn’t know her money would be used on private jets going all over the world.”

But the most important audience for the Republican debates is not TV viewers ~ The party’s leaders also carry tremendous sway ~  since the infamous election of 1980, the single best predictor of a party’s nominee is the number of endorsements from party elites in the months before primaries begin. As Lynn Vavreck points out in the New York Times ~ ” in 2012, it became clear that when candidates’ share of media coverage grew and the tone of their coverage became increasingly positive, a direct bounce in poll numbers resulted.”

So what we really have here is a National Audition before the financial elite, including AIPAC ~ where the decision is really made before the primaries on who to back and which one to concentrate media coverage as well as the big bucks. 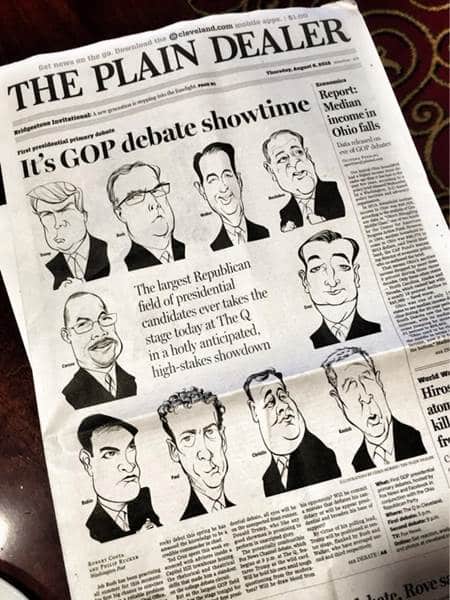 For the top candidates, it’s an audition for party elites, moneyed supporters and lastly, the voters. The goal in reality isn’t to wow the crowd or create a surge in the polls, but instead to reassure ~ to confirm their ability to win, to handle the presidency and above all to maintain the status Quo of the Oligarchy.

It’s ShowTime and all the pretenders are there including the barker or lightning rod (Trump) to create the illusion of real change in the air ~ and thus true Kabuki theater.

It is no longer the people’s election ~ it is now the Oligarch’s election in that a few dozen super-rich contributors are bankrolling ~ and thereby controlling ~ the 2016 presidential election campaign.

Here’s the true breakdown on the bankrolling of candidates as reflected in these representative headlines that appeared over the past two weeks:

” Each of these reports relies on the figures from the FEC to document the role of a tiny group of extraordinarily wealthy contributors in shaping the course of the 2016 presidential campaign in both the Democratic and Republican parties. The bulk of this money has been channeled through so-called super PACs, the nominally independent political action committees called into existence by the Supreme Court’s 2010 decision in the Citizens United case, which legalized unlimited political contributions by millionaires and billionaires.

A few of the most important figures are worth citing:

Of course, the Democratic campaign, in terms of the number of candidates, offers the inverse of the Republicans. Hillary Clinton has become the prohibitive favorite because she was the only candidate with significant backing from the financial oligarchy. Already, eightindividuals have given $1 million or more to one of Clinton’s super PACs, with Wall Street and Hollywood the main contributors.

In a little-noticed commentary on a national radio program Tuesday, former President Jimmy Carter correctly confirmed that money had completely corrupted the political system of the United States. “Now it’s just an oligarchy,” he said, “with unlimited political bribery being the essence of getting the nominations for president or to elect the president. And the same thing applies to governors and US senators and Congress members.”

Just note all this as we watch Bernie Sanders bring in the huge crowds in his current grassroots Presidential campaign ~ and recognize what he is really up against. Because of the Supreme Court’s Citizens United decision , corporations are now citizens with a vote and the means to decide an election with all their money and media support. What is emerging in the corruption of the 2016 US presidential election is the essence of capitalist politics ~ the dictatorship of the financial overlords who dominate every aspect of American society.

The game is rigged and we don’t really have a meaningful vote ~ we are not in the big club and no one says it better than the late George Carlin. 3 minute video ~

The whole aim of practical politics is to keep the populace alarmed (and hence clamorous to be led to safety) by menacing it with an endless series of hobgoblins, all of them imaginary: H.L. Mencken