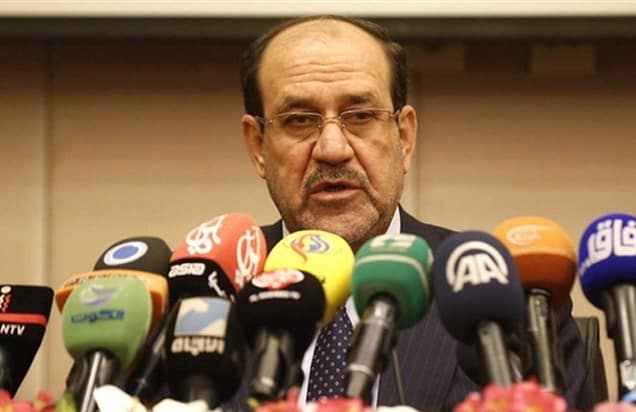 Editor’s note:  There are things to look at here, Barzani’s lack of criticism at Turkey’s attacks on Kurdish villages and YPG militia units fighting ISIS in Syria.  Then there is the abject failure of the well established plan for Permersha forces to retake Mosul before June with US help.  We didn’t forget that one.
Was Barzani’s plan to play rope-a-dope with ISIS while they took Ramadi, Fallujah and then Baghdad?  Was Iraq going to be divided up then just as General Ray Odierno stated last week? Were the Kurds to get the entire Kirkuk oil fields, one of the world’s largest oil reserves that flows to market through Turkey?
How would Barzani repay Erdogan?  Could he guarantee Erdogan the votes needed for dictatorship, the votes Turkey’s embattled Kurds used to crush Erdogan? Is this deal why US air power has been such a failure, was this America’s long term game in Iraq?
_______________________________
TEHRAN (FNA) – Iraqi Vice-President Nuri al-Maliki underlined that the fall of the city of Mosul was the result of the plots hatched by Turkey and Iraq’s Kurdistan Regional Government.

“The fall of Mosul was the result of the plots hatched in Ankara and Erbil,” Maliki said, addressing a press conference in Tehran on Monday.

Asked about the inclusion of his name in the list of persons responsible for the fall of Ramadi by the Iraqi Parliament’s Investigation Committee, the vice-president and former prime minister said, “The members of the investigation committee are at odds over political issues and the committee has lost its practicality.”

He said political differences have caused the committee to lose track of action and fail to see the underlying causes of the fall of Ramadi.

“The veracity and truthfulness of the investigation is also in serious doubt,” al-Maliki continued.

Since ISIL’s invasion of Iraq and its rapid capturing of Mosul last August, the fall of Ramadi has been the biggest defeat of the Iraqi forces in their war against ISIL; a defeat that killed the increasing momentum of the Iraqi popular forces’ chain of victories in different battles against the Takfiri terrorists.

On Friday, Iraqi Vice-President Osama al-Nujaifi disclosed that over 2,000 people have been executed by the ISIL Takfiri terrorists in Mosul since the group occupied the city in June of 2014.

Local sources said that the ISIL authorities have released the names of 2,000 Mosul residents who were executed by the group to issue death certificates for the victims. Al-Nujaifi urged the Iraqi government to take serious steps to liberate the province and free the people.

Senior Iraqi officials have blamed Saudi Arabia, Qatar, and some Persian Gulf Arab states for the growing terrorism in their country. That ISIL has links with Saudi intelligence and is believed to be indirectly supported by the Israeli regime.