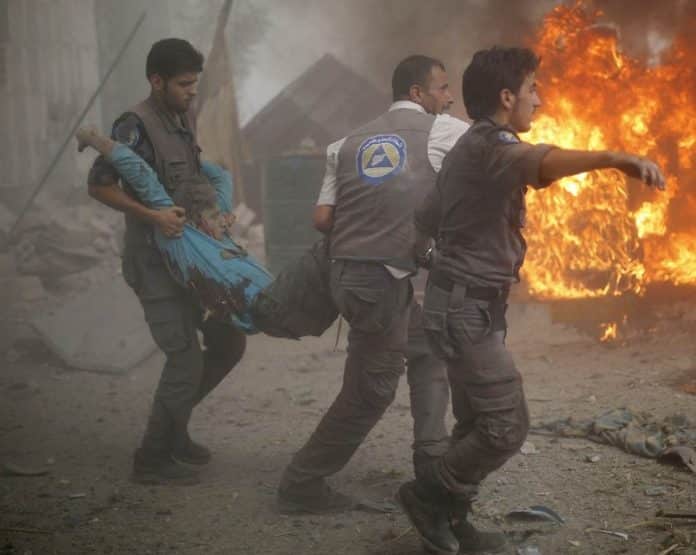 A story today released to the world press by the CIA funded Syrian Human Rights Observatory of an attack by the Syrian Air Force on a market in Damascus, killing 80, is a hoax, one of many that group has perpetrated since it was set up by the CIA, Booz Allen Hamilton and Radio Liberty, the “triumvirate” of psychological warfare and disinformation.

It seems that London based organization continues to be involved in poison gas attacks that it so often blames on others.

The Syrian Air Force attacked a chemical weapons facility outside Damascus today n the Douma district, an area held by commander of a 20,000 man ISIS force, Zahran Aloosh, who has been fighting  with Arar al sham and Fateh islam for months over control of the vital region within rocket and mortar range of downtown Damascus.

If there are civilian casualties and there is no reliable confirmation of this, it would be from exploding munitions, chemical precursors and rocket propellants stored at the Zahran Aloosh facility nowhere near any of the regions marketplaces.

It seems the Mustard and Chlorine gases used recently against Iraq and the Kurds, produced by Turkish WMD specialists, is being sent to Damascus as well.

Times of Israel “stringer” inside Syria always gets his photo even if the idiot he is shooting has to do it a dozen times to get the right expression.  His famous “pink bear” photo is a classic tear jerker.

The photographer responsible is a Syrian working with Israeli intelligence called  Sammi Doumy who lives in Douma, a Damascus suburb under the control of ISIS. Though working for Israel, he seems to be working for ISIS as well.  Imagine that!

The photo above, will full make-up and a carefully created gasoline fire as a backdrop, is said to depict a Syrian Air Force raid on the ISIS/Zahran Aloosh held region north of Damascus known as Douma.  The story spread around with these photos describes this as the biggest massacre since, well since the last biggest massacre with gas and barrel bombs.

This one was supposedly “rockets,” and a Syrian Air Force “spokesman” admitted to it all.  According to the Syrian Air Force, you can reach them by phone, they know nothing of the statement quoted.  It was made up.  We have the real statement:

Someone seems to be figuring they can stage a “massacre” and keep rocketing Damascus neighborhoods with impunity.  This is pure psychological warfare.

No one gets in and out of Douma, not even VT’s own Damscus Bureau.  Douma is where the rockets raining on Damascus that have killed more than Assad will admit come from. What we have is street theatre, always the same people, the same actors, the same phony “London based” group and the same photographer, “SAMEER AL-DOUMY.”

Here was his next photo:

Look Familiar, it should.  Same actors, same fire, same place.  Sammi seemed to move to the left a bit.  Note the person in the rear isn’t walking at all and our “Fabian hairdo” guy is doing nothing at all.  He looked so great in the last photo.