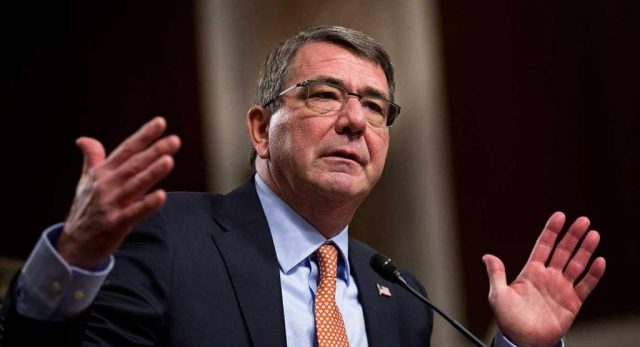 [ Editor’s Note: We have more cheap pandering from the Pentagon, which we have been expecting. As I have written many times before, our “defense” people seem to have chosen one simple propaganda policy for us. Anyone who can defend themselves, especially those who are threatened by the US regime, are deemed a threat purely by their being “non-submissive”.

We are seeing the old Cold War hypnotic repetition tactic; where various high level officials make media statements in quick succession to get five or six repetitive national news stories. The shrinks guarantee this will imprint the minds of most Americans with the preferred slant on any particular issue.

Other than the recent Iran nuclear deal, most of it has been a disaster, not the least of which was our War on Terror being morphed into a War OF Terror. Bush (43), Cheney and Rumsfeld are among the most hated people on the planet.

A case in point, when we had the big strategic nuclear weapons draw down with the old Soviet Union, it was hailed as an act of monumental statesmanship, despite all the nuclear material lost by the Soviets, which we were not able to buy back from their mafia people at a generous cost.

What was left in the reduced Russian stockpiles was not propagandized as our “biggest threat”. Sure, the Russians are modernizing their strategic weapons, but we were doing it before they were, so they are responding to our moves. What we have from America’s top defense officials is nothing more than an attempt to fuel a new Russian bogeyman to take the place of the Iranian one being put to bed… we hope. 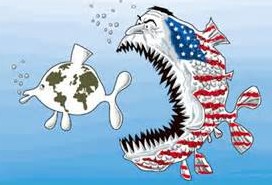 I consider propaganda ploys like this media charade as an attack on the common sense of the American people. Dear Mr. Carter and General Dunford… no we are not that stupid. We wish you were a little more connected with the people you are pledged to serve and protect, as frankly I am embarrassed by this tired and petty gamesmanship.

Everything you are doing is pushing these targeted Eurasian countries to hunker down into a carefully integrated military and economic defense, to get the biggest bang for what they are spending on defense.

The targeted countries have no force projection beyond their borders. You know it, we know it, and they know it. They have been completely on defense. Your aggressive posture is making us less safe, because they would have continued putting more capital into development, which makes me suspect that their financial sectors are the real “threat” you are addressing.

And there is another twist to this — where if they do not submit to US economic domination, they will be framed as a threat. Then America’s military can be abused by being deployed to again serve a certain special interests group that has brought America to ruin over these last 20 years. If you really want to serve your country, you can start by cutting out the bull. You did not lift a finger to do anything about 9-11 — and don’t think we didn’t notice… Jim W. Dean ]

Carter, who made the remarks on Thursday, was referring to an assessment by a chorus of top military officials, who had made a comparison between Russia and Daesh terrorists in Iraq and Syria.

On July 9, Marine General Joseph Dunford told lawmakers that his assessment was that Russia posed “the greatest threat to our national security.”

Carter said he agreed with the assessment “by virtue simply of the size of the nuclear arsenal that it (Russia)’s had.”

“Now, that’s not new,” he said at a Pentagon press conference. “What’s new — and I think also that they were pointing to and where I agree with them — is that for a quarter century or so, since the end of the Cold War, we have not regarded Russia as an antagonist.”

“Vladimir Putin’s Russia behaves, in many respects, as — in some respects and in very important respects, as an antagonist. That is new. That is something, therefore, that we need to adjust to and counter,” Carter added.

The US and its allies have been accusing Moscow of sending troops into eastern Ukraine in support of the pro-Russian forces, but Moscow has strongly denied involvement in Ukraine’s crisis.

Russia says the US is responsible for the escalating tension in Ukraine through sending arms in support of the Ukrainian army.

Carter on Thursday called the Pentagon’s strategy with regard to Russia “strong and balanced,” saying that the former means the US is “adjusting our capabilities qualitative and in terms of their deployments, to take account of this behavior of Russia,” adding, the latter means that “we continue to work with Russia because you can’t paint all their behavior with one brush” as the two countries have cooperation on some areas.